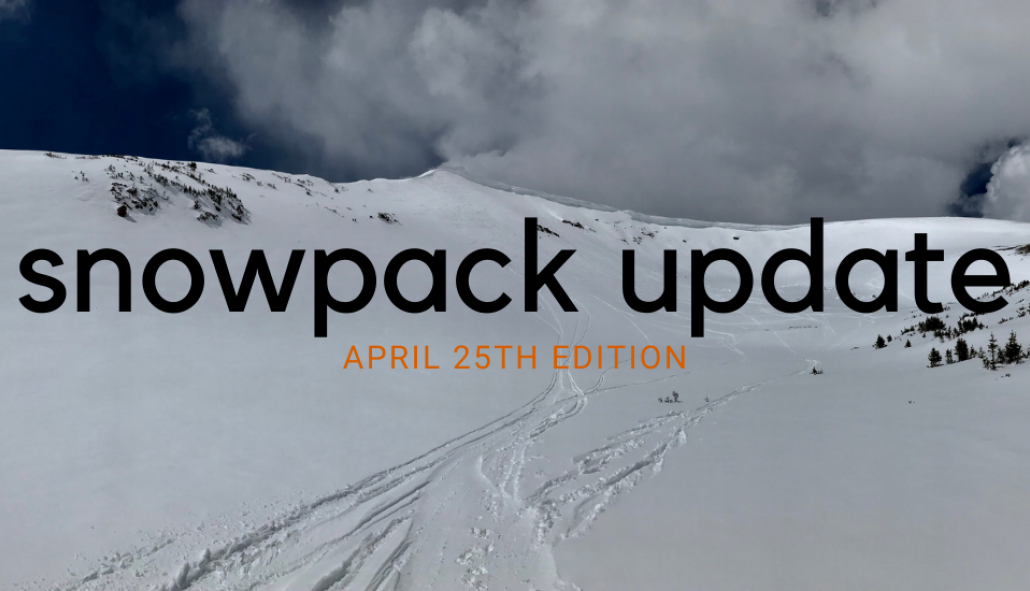 A lot has changed in our State’s snowpack since our last installment of our Snowpack Updates, further proving the unpredictability of Colorado weather. Following the blizzard of March 2021, we experienced a bout of unseasonably warm temperatures across most of the state, which while ideal for bringing us out of the Winter cold, didn’t do much for retaining snowpack. As a result, we have seen declines in our mountain snow throughout most of the state, with the exception of the South Platte and North Platte River Basins, which benefited from consistent snow throughout April.

As you can see from the chart above, the Middle and Southwest portions of the state are seeing a reduced snowpack, while the Northern regions are largely fairing better. The real notable river basin above is the South Platte, as this will have a big influence on how water is moved across the Continental Divide this summer. In years like this when the snowpack is larger on the Eastern side of the Divide, we will see lesser flows coming into the various South Platte River tributaries that get supplied from the West side of the Continental Divide. In particular, we can expect to see decreased flows in the North Fork of the South Platte River, and increased flows for areas like the Dream Stream, 11-Mile Canyon, Cheesman Canyon, Deckers and Waterton Canyon. Conversely, when we have a larger snowpack on the Western side of the Divide, we can expect to see lesser flows on the mainstem of the South Platte, and higher flows on the North Fork. It should also be noted that the current snowpack in the South Platte basin is very positive for supplying Front Range Water needs, but we all need to continue having a conservation mindset when it comes to general water usage.

The last notable snowpack update is that we have seen our snowpack across the state peak, and we are now in the downward trend of this annual cycle, meaning that run-off is likely around the corner.

So what does this mean as it pertains to fishing? In short, the fishing will continue to be very productive as we progress towards runoff across all rivers and streams. In the short term, we have snow forecasted for the mountain corridor, with temperatures not getting much higher than the 50’s. This means we will continue to see “valley melt” (snow below 9,000’ - 10,000’), which will add much needed water to the rivers, reminding the fish of what’s around the corner. Once we start to see valley temperatures in the 60’s and 70’s we can expect to see the early signs of runoff. So in the interim get out and fish while the fishing is to be had!

I wanted to close by thanking all of our faithful customers and followers for the continued support. The past year has been nothing short of extraordinary for the sport of fly fishing, and it has been our honor to serve, assist and entertain you during that time. Always remember, our home is your home, or maybe we’ll see you on the water.