8 Of The Spookiest Waters To Fish 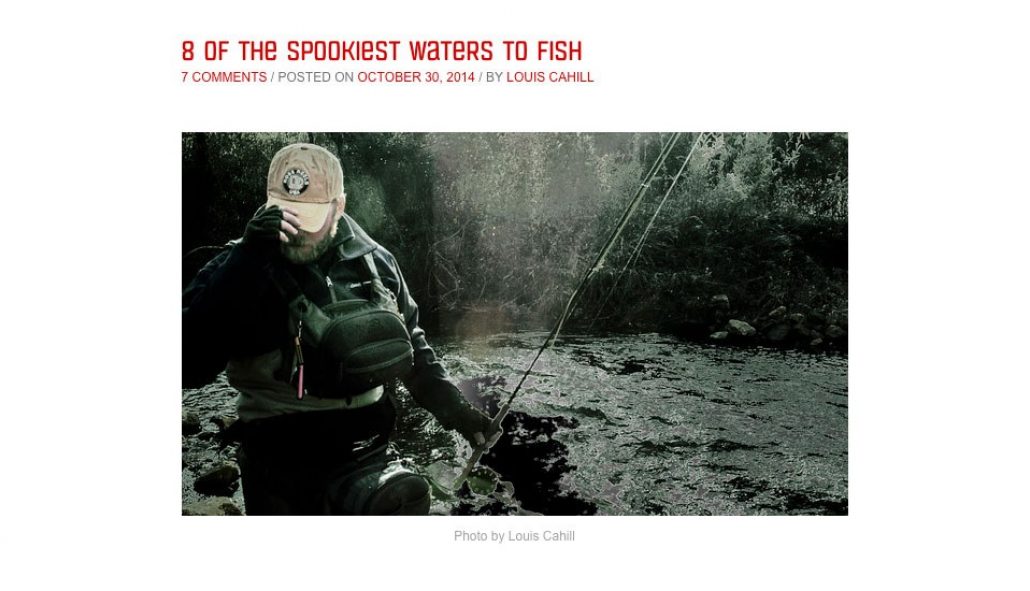 What are you dressing up as this weekend? I think I'll stick with the usual....a fisherman.

Our friends over at Gink and Gasoline never seem to disappoint with their Blog. So in sticking with the theme of the weekend....the 8 spookiest waters to fish.

Your home water could be on this list and you may not even know that it is haunted. This is a fly fisher’s Halloween brought to you by Gink and Gasoline! Enjoy reading about the top 8 spookiest places to fish … Look out behind you!

You can fish for striped bass, largemouth, catfish, and more all throughout the year on Tennessee’s Red River. Not only is it a great warmwater river to fish, but it also comes with a dark past. The story of the Bell Witch is one of the most well known supernatural stories in American history. President Andrew Jackson even acknowledged the tales of the witch spirit who terrorized Betsy Bell while he was in office! You can reach the famous Bell Witch Cave by the Red River, which runs by the Bell family property. A witch has terrorized this cave for centuries, and there have been a few eerie sightings of the Bell Witch on the Red River as well.

Rock Creek, also known as the Monocacy River, is a well-known trout fishing destination on the East coast. Rock Creek is in south-central Pennsylvania and runs across the state borer into Maryland. You know what it also runs through? Rock Creek runs through Gettysburg, the site of the bloodiest battle in the history of the United States. Over 45,000 soldiers lost their lives by Rock Creek, and locals still report sightings of Confederate soldiers firing muskets across the once bloody waters.

Surprisingly, not too many people know that North Carolina’s Outer Banks is a prime area to fish for redfish. Ocracoke Island serves as a haven for big bull reds that pass through each fall into North Carolina’s inner banks to spawn. Ocracoke Island is the site where Lieutenant Robert Maynard killed the famous pirate, Blackbeard. Blackbeard died after being shot five times and stabbed over twenty times. His head was cut off and his body was thrown overboard where it is said that his headless body swam around the boat seven times before drowning. Blackbeard’s ghost still haunts these waters today.

Paddle faster! I hear banjos! The Chattooga River is a beautiful place to try for trout and shoal bass. Located at the Georgia/South Carolina border, the Chattooga River has a long, rich history. It is a nice place, trust me, with nice people as well; however, once you have watched the movie: “Deliverance,” fishing that place will never be the same. Just remember – if you hear banjos… get the hell out of there!

This nine-mile river is stocked with brown and brook trout year round to keep fly anglers busy. It is also the quaint little river that Ichabod Crane tried to cross over before the headless horseman killed him. The Tarry Town Settlement was established in the late 1700s by English settlers, but was previously inhabited by the Weckquaesgeek tribe, who were related to the Mochians. Anyway, Tarry Town backs right up to Sleepy Hollow, the spine-chilling area where the headless horseman is said to still be seen riding by the Pocantico River at night in search for his head.

Recently the US Government took down the dam that stopped salmon from traveling into the upper waters of the Elwha River to spawn. This river is great for steelhead as well; however, there is something creepy about it. One of the first white settlers ever to explore this river wrote in his journal that the canyon walls appeared to have “tortured expressions.”

The Green River is another great river for salmon and steelhead, but just like all the rest of these scary places, it has a bloody past. Gary Ridgway was convicted of 48 separate murders in the 1980s and later confessed to killing around ninety people. He was so evil that hell spit that man back out. Gary Ridgway was later given the nickname, The Green River Killer, for all of the bodies he had dumped into the river. Very disturbing and sinister.