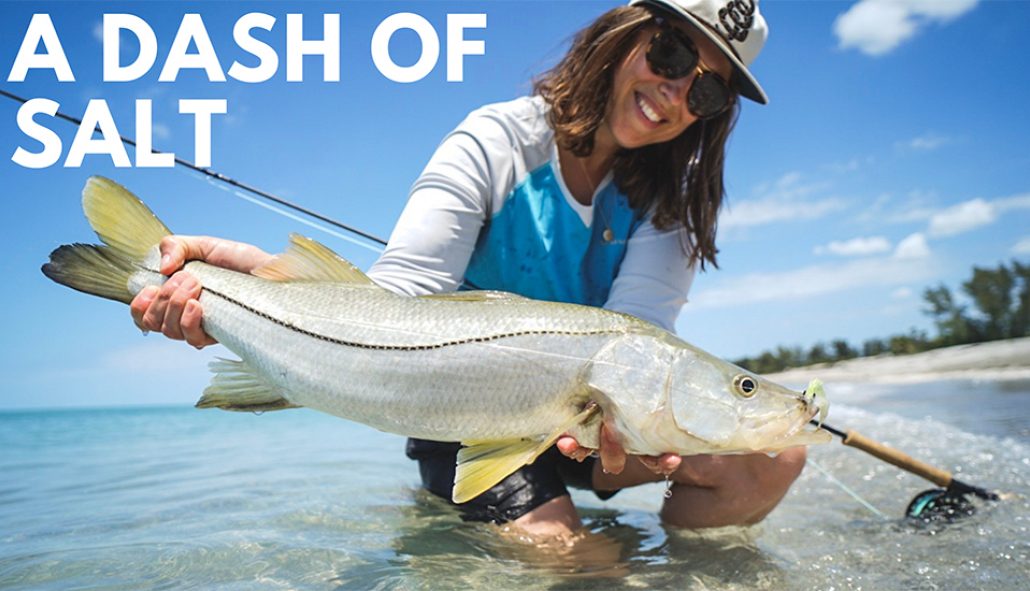 It was about 10 o’clock on a summer night when we pulled up to a small, empty parking area alongside U.S. 1 somewhere in the middle Keys. My then-girlfriend, Claudia, and I were on our first saltwater fishing trip and had just arrived from Denver a few hours earlier. We had close to no idea what we were doing and ended up at this spot through a tip from a buddy back at home. He said: “I haven’t been there in a long time but I remember there were tarpon there...” or something along those lines. That was good enough for me. I’d already rigged my nine-weight at the hotel so I grabbed it and we both began to feel our way through the mangroves in the dark.

Before we could even see the water, we began to hear it. The tide was pushing hard through the pass and it sounded like a river rushing around the bridge supports. We also heard what sounded like big rocks being thrown into the water from above. As we got closer, I realized what we’d heard were tarpon blasting baitfish on the surface as the tide dragged them all toward the Atlantic. The scene was violent, loud, and truly unlike anything either of us had ever seen before. “This is insane,” I exclaimed as I began to strip fly line off the reel and then cast “upstream” of the feeding tarpon. It felt like we were a long way from the trout streams back home — and we were.

Between the rocky bridge pilings and the dense mangroves, casting was difficult, but I had eats nearly every time I was able to get the fly into the right zone. Converting those eats, however, that was an entirely different story. Between trout sets and general over eagerness, I managed to screw up every single opportunity. Perfect.

“Strip set, strip set, strip set...” I said to myself as I dragged the fly through another pod of fish. Like clockwork, one of the tarpon ate, and finally, I was able to bury the hook into its bony jaw. My reel was screaming and the fish ran far into the bay. Just as I was beginning to feel like I’d finally get one to hand, once again, the running stopped. I figured this was just like the last four or five fish that I managed to lose but when I went to reel my line back in, it felt surprisingly heavy.

Once I was finally able to get most of the line back on the reel, Claudia spotted a shiny fish coming toward us. The tarpon was still on the line, but where its tail should have been were instead bloody ribbons of flesh waving through the water. As I brought the tarpon to the rocks and picked it up, we both saw an enormous bull shark cruise past us, no doubt trying to finish the job he’d begun moments ago.

I lifted my first tarpon from the water — well, most of my first tarpon. The fish was heavy and its mouth was hard and rough, not completely unlike what I’d always imagined. I stared into its enormous eyes for a moment with a mix of excitement and sadness. Unsure about exactly what I should do, I decided to toss the bleeding fish back into the water. Predictably, the bull shark was waiting just out of sight. In a matter of seconds, what little remained of the tarpon was gone. A blanket of scales shimmered in the lights beneath the bridge.

We both peered out into the darkness and Claudia calmly announced: “I think I’ll cancel our snorkeling trip tomorrow.” I did not protest.
___

Since that week back in 2015, I’ve been lucky enough to make a handful of trips to Florida. Nearly every time, I approach each new adventure with some trepidation. After all, fishing with a heavy rod in a literal ocean is a wildly intimidating game. Snook on the beach, redfish in the mangroves, tarpon on the passes — if you have feet, a kayak, or even a mild sense of adventure, there is no shortage of opportunities for the DIY angler in Florida. Here are a couple of things that have made my "DIY"-ish trips back to Florida productive ones.

That new 8-weight rod and reel you just picked up for your saltwater vacation is going to be a different animal than your 4-weight you’ve been using all year. The last thing you want is to have a shot at a giant snook on the beach and not be able to effectively deliver your fly to the dinner table. Grab a couple of beers and go to the park. Drink one while you’re getting set up then set that empty can out in the grass about 45’ away. Make some casts to it and drink another beer — then put that can at 75’. While there is nothing that can completely prepare you for the real thing, a few days of practice casting in the park will have you feeling at least moderately prepared when you’re face to face with the real thing.

Depending upon where you are going and what time of year, the fishing opportunities could be very different. Google is your best friend. With very little effort, you should be able to get a pretty good idea of what you can expect during your visit. If you’re visiting during the winter months, for instance, you might benefit from renting a kayak or SUP and exploring the mangroves. If you’re headed east during the summer, walking the beaches with your 7-weight and searching for cruising snook might be the name of the game. No matter what time of year, though, there is going to be something happening. The trick is to figure out where you should spend time while you’re there.

Hire a guide at the very beginning of your trip.

You don’t need to be the bow of a skiff for a week straight, but if there is any way you can swing it, I highly recommend that you find a guide and go out with him/her on the front end of your trip. While you’re out having an incredible time out on a boat with a bonafide saltwater expert, you’ll be able to glean tons of information about the local area. I’ve never met a guide who isn’t willing to help out with a few tips and tricks that you can implement throughout the remainder of their trip. Pro tip: book a night trip fishing the docks for snook and tarpon. These are generally much less expensive and offer nearly non-stop action. For visiting freshwater angler, there is no better way to get a crash course in abandoning your trout set.

If you heed my last bit of advice and win, you can pretty much ignore everything else I’ve said. With your new millions, you’ll be able to afford your own house in saltwater paradise as well as your own boat, and as many days as you want on the bow of a skiff with a world-class guide. Oh, and don’t forget who told you to buy the ticket. I’m a great fishing buddy!