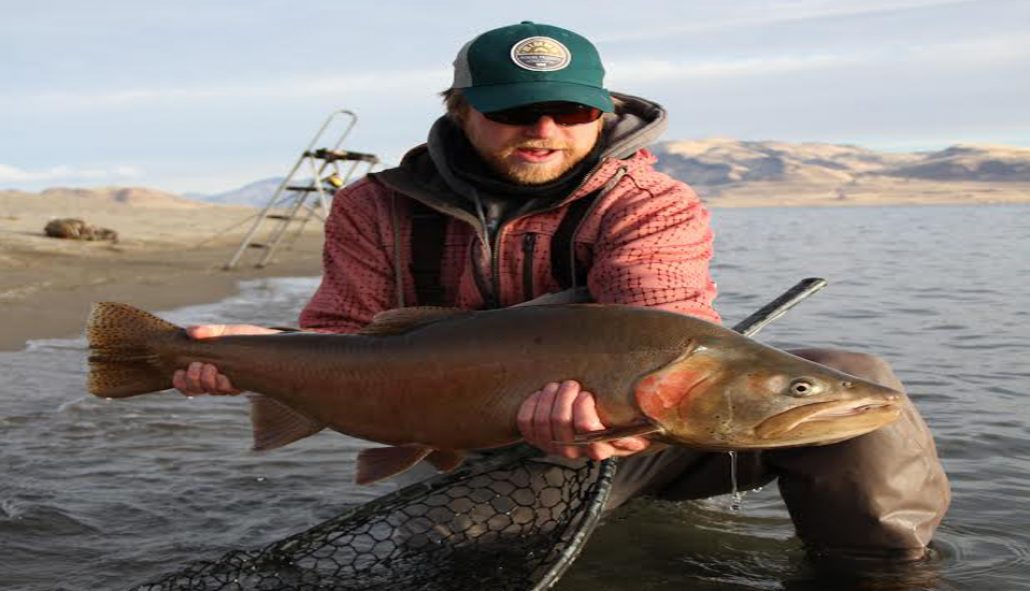 The last time we heard from Phil Tereyla he was in the shop giving his presentation on Targeting Trophy Fall Trout. Now that the guide season has slowed a bit, Phil has been busy chasing fish with a fly rod in his hand. If you know Phill then you know he has a knack for finding big fish. It should come as no surprise then that one of the destinations he's been to recently was the famed Pyramid Lake. We recently got a chance to catch up with him and get some insight on the fishery that annually produces some of the largest Trout in the lower 48!

Trouts: For those unfamiliar with Pyramid Lake? Can you tell us a little about the fishery and what made you first make the trip?

PT: Well first of all thank you for having me and I hope my answers can help out anyone headed there on a trip. I would also like to say that while my friends and I have made this an annual trip for a few years now and have found some pretty solid success, there are anglers and guides that have been working the water for many years. I am in no way an expert on the lake like many of those guys. I have just been the benefactor of some good luck. To start, Pyramid Lake is a large body of water located just northeast of Reno, Nevada. It sits on the Pyramid Lake Paiute Tribe reservation and we should be lucky that we get an opportunity to fish there. The lake is inhabited by several species of fish, most notably from an angler's standpoint, the Lahontan Cutthroat. These fish historically grow over 40 pounds and with the reintroduction of the Pilot Peak strain, these fish could reach that size class in coming years. My first trip came in the spring of 2012 and I was just on the lucky end of an invite from some of my good friends. I didn't really know what to expect until I checked it out online. That's when I really saw the potential of what the lake had to offer.

Trouts: How long have you been making the trip? I assume there were some learning curves from the first trip until now?

PT: We have been heading to Pyramid since 2012. My first trip offered up some slow fishing, but a great time none the less. As far as the learning curve, we all have kind of just dialed in flies and some of the beaches that we have confidence in. I am by far no expert and absolutely do not claim that in anyway as there are guys that have been working and fishing that lake for many years. If you are in need of a guide, I would have no hesitation reccomending reaching out to them, if for nothing else, to curb that learning curve as much as possible.

Trouts: What can you tell someone to expect when making a trip out there for the first time?

PT: I would say to those making their first trip, to not expect high numbers. There are certainly times when you will hook a bunch of fish in a day, but there are also days where you hope for just one opportunity. There are days when you may catch a fish on your first or second cast, and then not get touched again for 5 or 6 hours. The key is to stay at it and pay your dues. At the end of the day it's fishing and it's important to not take each fish for granted.

Trouts: I understand you go annually in the Spring and Fall? What are the differences between the two trips?

PT: We have made the trip in both the spring and fall. Spring tends to be a little more crowded and you can expect some better numbers as fish pod up and cruise the shorelines looking to spawn in March and April. Historically, at least in our research, it seems like some of the largest fish come in the fall as the large fish search for baitfish along the deep drop offs. Again, this is just my experience and I am sure those that work the lake every day can give a better testament to their methods of success, but it seems that fishing streamers tend to be better in the fall, while spring can offer great nymphing under an indicator.

Trouts: How do you approach these fish? Nymph rigs? Streamers? whats been your most effective method?

PT: That's good question. We have caught fish on both indicator rigs and streamers. Some days it seems like the fish want to chase down a food source, while other days they may be a little more on the lazy side and just want to open their mouth as they slowly cruise. I have been lucky enough to catch two fish over 20 pounds, and one came stripping a Pyramid Lake Tadpole, while the other was caught under an indicator. Either way, when you hook up, the adrenaline rush is crazy. You don't know if you just hooked an 20 incher or a fish that could go for 20 pounds or better.

Trouts: What equipment is a must? I assume you need a little more than your standard 9 foot 5 weight rod to land these big fish?

PT: As far as gear goes, I use an 8 weight rod. When stripping I like to use a fast sinking full sink line, while some guys will use a line with a fast sinking tip. I think you can get away with a 7 but if you hook into a giant, the gear will be put to the test. The biggest consideration is the amount of backing on your reel. 200 or 300 yards is a must if you hook into one of the giants. I also use 0X and flies tied on extra heavy hooks. The last thing you want to have happen is having a hook bend out.

Trouts: Tell us about the whole ladder thing? Why do people fish off of ladders here? and what we are all dying to know--- have you ever fallen off your ladder?

PT: The ladders are pretty genius to be honest. I am surprised they haven't caught on locally or on many other stillwaters. Fishing Pyramind, you want to fish the drops. Some of these drops will go from 3 feet to 60 feet or more of water in a hurry. This is where the ladders come in handy. While some of the beaches have the drop line right next to the bank, others require you to wade out a little bit, sometimes up to your chest or so. By placing the ladder on the edge of the drop, you elevate yourself higher above the water, making those long casts more manageable. As far as falling off the ladder, I have to admit that I have lost balance and fallen backwards off the ladder. I'll tell you, I'm glad I fell backwards into shallow water than forwards off of the deep drop.

Trouts: Legend has it that you landed two of your biggest fish there on the exact same day exactly a year apart? Can you tell us a little about those fish and the fights?

PT: Yea I have been lucky enough to have landed 3 trout over 20 pounds in my life, with two of which coming from the same beach at Pyramid. I am not sure they were on the same date, but both happened on the second day of the trip two years in a row. The first came on a crazy cold and windy morning. I was stripping a Pyramid Lake Tadpole and had two or three strips left before I was going to pick up and cast again. My line stopped so I lifted to set. I was unsure of the size at first, but after getting into my backing a few times and taking me 100 yards down the beach, I was pretty beside myself to finally see my buddy get a net under the big guy. The second happened this year and occurred the morning of the second day. We had all caught fish stripping that morning and after seeing a few fish porpoise, I thought I would throw and indicator rig. My flies had just gotten back to the drop and I was just getting ready to cast when my indicator just kind of casually dipped under the water. I lifted and the fish took off close to 200 yards of backing with the drag cranked almost to the max. Again, if not for my buddy and the awesome net job, I don't know if I would have been able to land the fish.

Trouts: What Restaurants and bars would you recommend during a trip there?

PT: Well to be honest, we rent an RV after flying into Reno and just make food on the beaches. Reno is only a 40 minute or so drive away, and Crosby's is right there on the lake. They have a kitchen there, as well as trailers to rent, and a full bar. They also have a karaoke night if you are so inclined to get a little rowdy and belt it out a little bit! 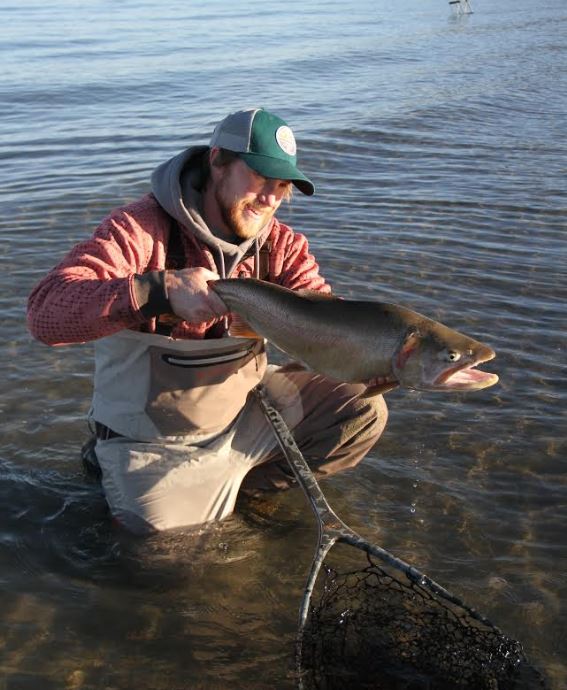 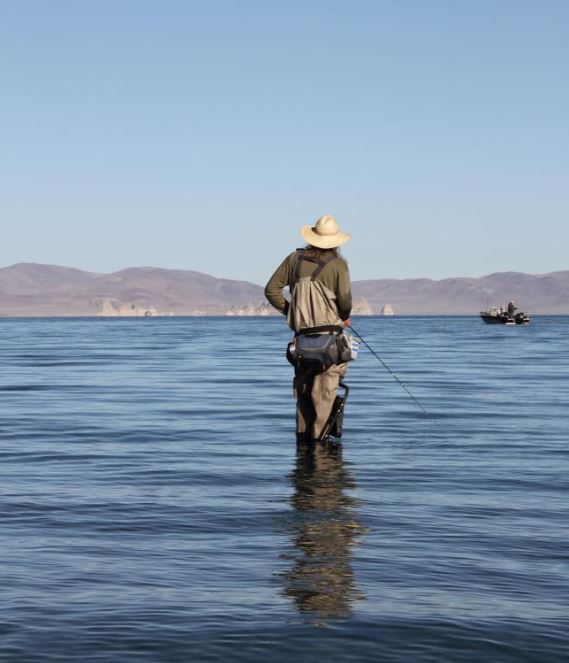