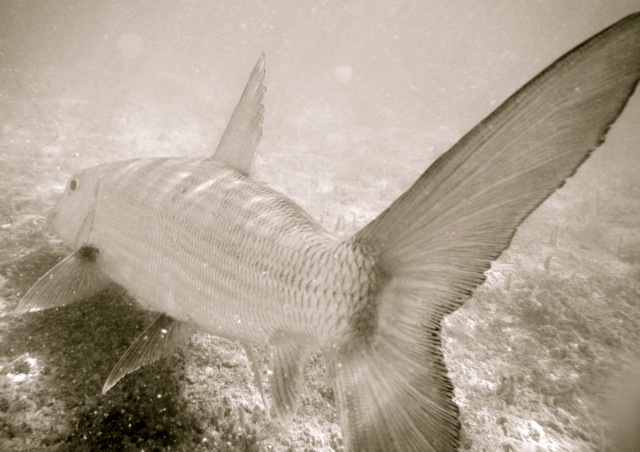 My eyes had to adjust to what I was looking at. I hadn’t seen anything like it in almost 10 years. The large mass of grey/brown color could easily be mistaken for a patch of Caribbean turtle grass or coral… but it wasn’t turtle grass or coral. It was a massive school of Bahamian bonefish.

“You see how those fish are starting to move to the left,” said Sparkles, our guide from the Andros South Lodge. “Show me the cast – eleven o’clock… 50 ft. Make the cast.”

Lucas was on the front of the boat and did as he was told – he didn’t say a word.

Can you see the bonefish?

On the second long strip I watched two or three bonefish trip over each other as they left the giant school. One second later the fly line straightened and Lucas set the hook. Two seconds after that… his Hatch 7 Plus reel just hissed and buzzed.

After my last bonefish and permit mission to Honduras a year ago, it was music to the ears.

I had not been to the Bahamas in over a decade and I was very interested to see what awaited our seven clients. This was my first trip to the Andros South Lodge. Would the fishing be as good as I remembered? Would the bonefish eat as voraciously as I recalled? Would the mystique of fishing one of the most prolific fisheries on the planet change for the better or worse?

After a fairly grueling travel day that began in Denver at 1:00am and ended around 4:30pm the next afternoon we were greeted with some fairly big wind on our first morning. From there, each day seemed to get better and better. I covered in my last report the general areas we fished on South Andros. Our first two days were similar to what I remembered. We ran into singles and doubles cruising the shoreline. Due to the wind and some of the chop on the water, these fish were just crushing flies that were presented them in just about any fashion. As the weather improved and the water became calmer, the fish became a bit more selective. 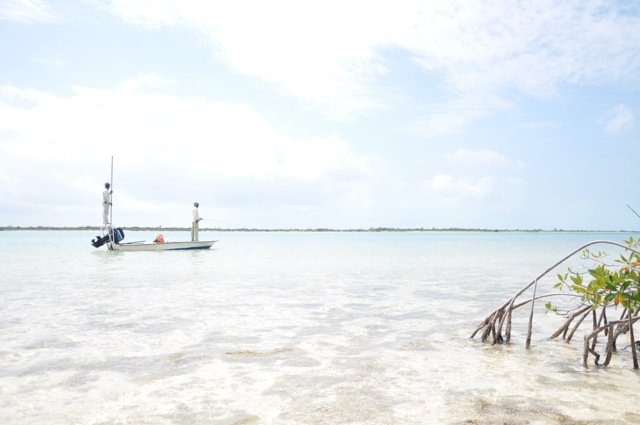 Stalking singles and doubles on the West Side

Hot fly patterns during our week at Andros South: big mantis shrimp with rubber legs, tan, size #2 and #4, spawning mantis shrimp tan/orange #4 and #6, the Shrimp Scampi in #4 and #6, the West Side #2 and #4. If you have a trip this area of the Bahamas on the books or would like to take a look at some of these flies, stop into the shop.

This bonefish ate a tan and orange birthing mantis fly

As far as gear and rigging goes – we fished 8 wt rods with reels that held weight forward floating line with at least 200 yds of backing. One fish that I hooked on my second day pulled so hard for such a long time I saw my spool. For the entire trip I threw a 12 lb fluorocarbon leader and a 12 lb fluorocarbon tippet. Because of the coral and mangroves our fish would encounter on their long runs, I switched out my terminal tackle just about everyday. I also made sure to use the non-slip loop knot to connect my fly to my tippet. Not only does this give my bug more action in the water, I’m a firm believer that this increases the sink rate of the fly. 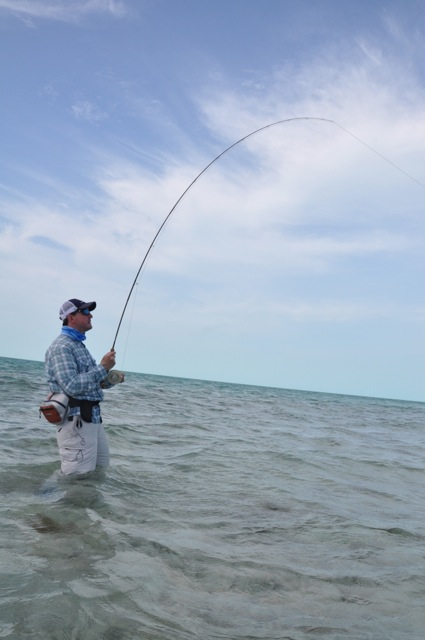 We had two rod catastrophes during our week. One rod broke on a fish and the second was the victim of a boat entry/exit mistake. Both situations a good reminder why having a solid back up plan is always important on a remote international destination trip like this.

In addition to seeing a lot of bonefish just about every single day, there were three groups of anglers during the week that saw permit. One of our clients had a shot at a permit that was estimated in the 20-25 lbs in weight class. When I first got back to the dock the permit was described to me like this: “it looked like a big garbage can lid eating a blue crab.” Unfortunately, we did not get a permit to eat on this trip.

The other secondary species we were prepared for was barracuda. As predicted, we saw big ‘cuda in the 40” class on the flats every day. My buddy Tom and I committed an entire afternoon to hooking a big boy. We were able to make over 30 shots at these fish using large needlefish imitations. We tried both rapid speed single hand retrieves as well as double handed retrieves.

Tom was able to get two fish to eat his fly – one broke him off on the first explosive run after his line balled up and failed to make a clean run through the eyelets of his rod.

It wasn’t until our last day when my fishing partner Lucas finally cracked the ‘cuda code. Instead of tying on giant a needlefish imitation, he sized down to a smaller green deceiver pattern. 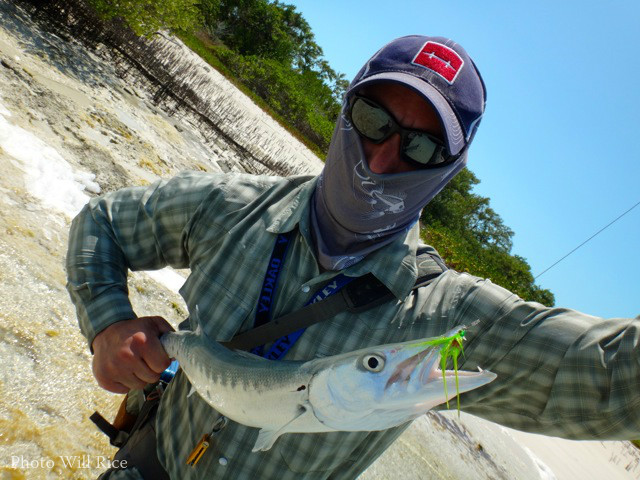 This 'cuda went straight after a smaller fly

The ‘cuda vs. angler score changed immediately. Before I knew it he had picked up two fish on his own from the beach. My final fish of the trip was a ‘cuda that was estimated between 30-35” that absolutely crushed a large green deceiver pattern and blasted my reel into the fly line backing before I could say “deeeaaaamn.” I was happy to see that the custom barracuda leaders and rigs we built before the trip held fast.

The guides at Andros South Lodge were fantastic. Each day presented new conditions and each day I felt like our guides hit the water with a new game plan and strategy. 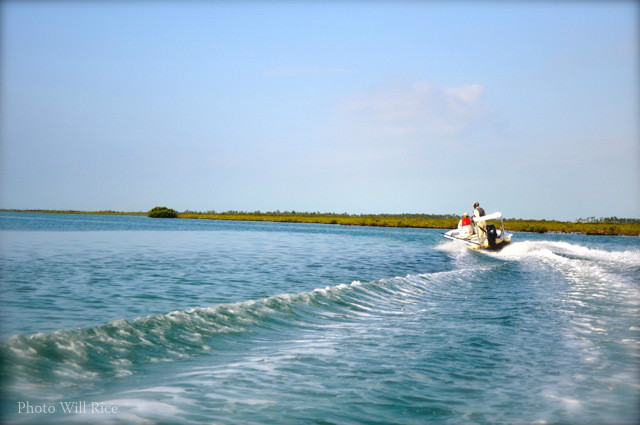 Most days I fished I never saw another boat or angler – ALL DAY. As long of a flight as it is from Denver, this is one of the beautiful things about the remoteness of South Andros Island. One really cool trip highlight: Torrie Bevans stopped by the lodge one evening after fishing and dropped some casting science. He walked everyone through his “TMC” - Torrie’s Mellow Cast. It was an awesome hands-on saltwater casting clinic that was aimed to help anglers cast in a strong wind and improve distance.

As far as the lodging and accommodations go, the Andros South Lodge is a true fishing lodge. There focus might not be on white linen tablecloths, but it is certainly on building a robust fishing program in a laid back setting. The food was awesome and there was lots of it. I probably had the best conch chowder of my life on night #2. After each long day of fishing we kicked backed in the infamous "Slack Tide" tiki bar, opened up the beach ‘fridge and was greeted by a battalion of cold Kaliks.

This is a well placed and well stocked 'fridge

One big shift that has occurred since my last trip to the island was a change in mindset about netting bonefish as well as new commercial fishing regulations. A few years ago, netting and selling bonefish became illegal. Penalties for breaking this law include a fine up to $3000 and a year in jail. My un-scientific opinion is that these new regulations put in place to protect this fishery have already paid dividends in a relatively short period of time. Over the six days our group stayed at the Andros South Lodge, two bonefish over 10 lbs came to hand and I saw 3 or 4 times the number of BIG schools of bonefish from my last visit. 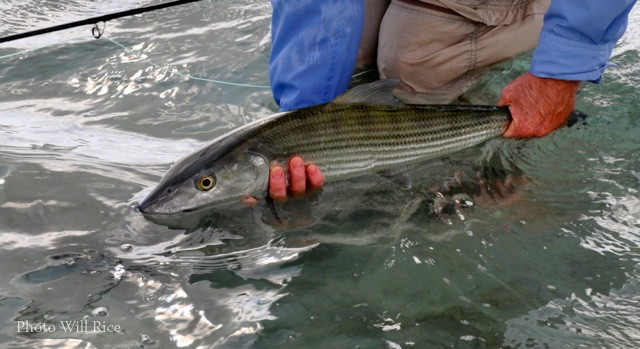 For more on this trip, keep your eyes peeled for a shop event sometime in April where we will give a short slideshow presentation from our week on South Andros Island also a basic overview on saltwater fly fishing. Trouts would like to give a HUGE thanks to everyone at the Andros South Lodge for all of your hospitality and also all of our clients who joined our international fly fishing adventure. We are already looking forward to our next one.