Behind the Brush with Artist Ty Hallock

As the weather started to turn for the better last month, artist and guide Ty Hallock made the voyage down from Casper, Wyoming to drop off six of his custom Illustrated Cliff Boxes. While "Behind the Brush" will become recurring series here on the Trouts blog, this one is more of a "Behind the Sharpie," you'll see why in a moment. We are proud to have the five custom Bugger Beast Jrs pictured above, still available in store for only $120. Needless to say, when I walked into work to start my week and saw his Cutthroat box staring right back at me, I wanted to know more. Ty was generous enough to take some time out of his busy guiding schedule to share his story with us.

Trouts: Your Illustrated Cliff Boxes definitely have some character. How did you get started and do you have an art school background?

TH: I have been drawing all my life, and there are some in my family that are talented with crafty projects. My mom and grandma used to drag me to craft fairs as a little kid. I really got focused in high school on graphic art and had some great teachers in Sturgis, South Dakota that helped me along the way. I went to College to play baseball and be an art major, strange combination! I soon realized that my baseball career was coming to an end so I really poured myself into the art program. I went to College at Northern State University in Aberdeen, South Dakota. I followed a girl there, we have been married twenty years now so I guess it worked out. We got married after our sophomore year in School and I don't think she was thrilled that I was going to be a starving artist. So I switched to Biology and Environmental Sciences and became a starving Biologist. I drew in class all the time, what ever we were studying I drew it. I guess my lab notebooks were really good because my professors hardly ever gave them back to me! I always drew fish and birds in all my jobs after college and traveled a bunch around doing summer jobs.

My wife and I started having kids so we moved to Wyoming 13 years ago. After a jobs at a fish hatchery and as a field tech for an Environmental Science Engineering firm, I started guiding on the North Platte with the Ugly Bug Fly Shop. I started drawing on fly boxes a couple of years ago while I was sitting at the Fly Fishing Show in Denver and we had a few boxes sitting at the booth. Blake Jackson said why don't you draw something on them. So, I drew a Brown trout on one and a Rainbow on the other one. They were both sold by the time I got them done. It dawned on me that I might be on to something. I started drawing on my fellow fishing guide friends coolers and it has blown up from there.

Trouts: Why fly boxes? What draws you to that medium, as opposed to more traditional formats?

TH: I like to create functional artwork you can take out and use. I have never seen a trout painting out in a boat before, so I think that is pretty cool that people can use my stuff outside. I also do traditional paintings and drawings too, but the Sharpies drawings seem to sell a lot better. Plus it is different and I think adds to the whole thing.

Trouts: What do you use to create your artwork on the Cliff boxes and Yeti Coolers? 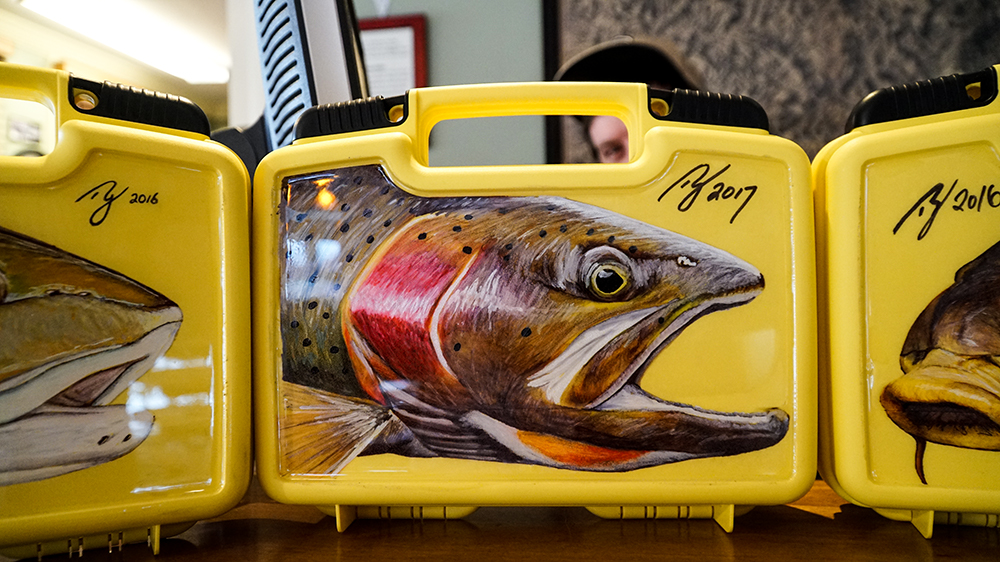 TH: I use a lot of my own fish that I catch with clients for my art. I also ask photographers like Tim Romano and Mark Lance for reference photos. I use a mix of photos and just drawing to create the majority of my work. I try something different almost every time I draw to push my art ability.

Trouts: How many paint pens/sharpies does it take to create the artwork on a Cliff Bugger Beast Jr? Should I be investing Sharpie stock before Ty Hallock takes off?

TH: Sharpies actually last a long time on the fly boxes, however the texture of the Yeti coolers really chews them up. I have a few more files than the Sharpies, but not by much! I keep Hobby Lobby in business with all the markers I buy. My goal is to be the first Sharpie pro staffer! We will see!

TH: I really like the Two Fly Poster I did this year for the tournament in Casper. It was my first real big project. I also really like the cooler lid I did for Curtis Fleming. He is the host of Fly Rod Chronicles and has fished with me the last couple of years while shooting his TV show. He has been a huge supporter of my work and has helped me with promotions on his show.

Trouts: When you aren’t on the water, how do you spend your time?

TH: Right now, I spend around 200 days on the water guiding and fun fishing here in Casper. My normal routine is to guide all day, come home and hang with the kids. Hang out with my very supportive and understanding wife until bed time. Then, I disappear into the basement AKA the art room, until 1 or 2 am. Get up in the morning and start over again. All winter, I do artwork, and Christmas is by far the busiest time. I hope in the future that I will get to draw more and row a boat less. Who knows I might actually get to take a guided trip instead of rowing someday if I get really popular!