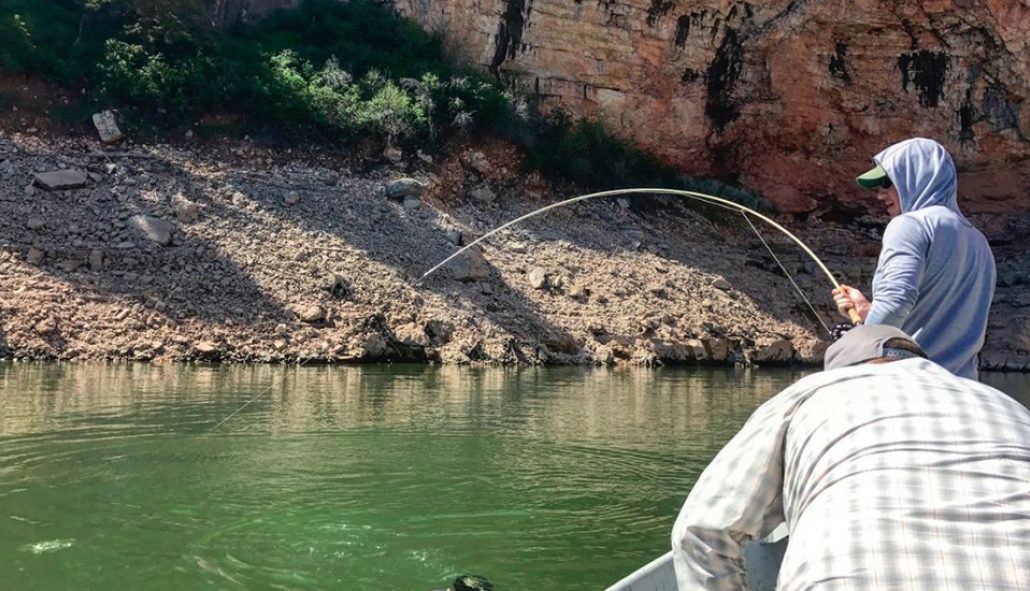 Destination travel is the ultimate goal for just about any fly angler. The idea of experiencing something new is what keeps fly fishing fresh and at the same time allows you to experience these new places in a way that is unique beyond what a simple vacation offers. While getting to places like Seychelles and Kamchatka haunt all our dreams, we easily forget how many great destinations we have right here in our own backyard. One of those destinations is the Bighorn River in Fort Smith, Montana. This past week I had the opportunity to host a trip for Trouts up at the Bighorn Angler. It’s safe to say the trip lived up to the hype.

First of all I couldn’t have asked for a better group to head up there with, so to everyone that made it happen, Thank You! Now, let’s get back to the story of the trip. Our plan was to get up there Thursday, fish a little that evening, float the following two days then sneak in as much fishing time Sunday as we could without getting back to Denver too late. Knowing myself, and my inability to sleep very much the night before an extended trip, I was looking for anyone in the group that would be ok leaving at the a**crack of dawn Thursday morning. Thankfully, my buddy Mike was going on the trip, having already gone on a few trips together, he knew my routine and gladly took the offer to be on the road no later than 4 AM Thursday morning. I was the host after all, so it made sense for me to be at least 2 hours earlier than everyone else. The rest of the crew had to finish up a few things at work or were already up fishing somewhere along the way up to Fort Smith. Besides a near emergency pit stop in Chugwater, Wyoming, the ride was about as smooth as it gets.

The drive across Wyoming and southern Montana is a trip I’ll never get sick of. I don’t know how to explain it, but there is something about the wide openness and endless rolling hills that makes me think “It doesn’t get much better than this.” Maybe that’s just my inner nerd coming out, after all I am a US History Major with an emphasis on the American West. Alright, enough of the overly poetic stuff. After one last pit stop in Sheridan to grab some lunch, Mike and I arrived at the Bighorn Angler about 1 PM. We checked in with one of Bighorn Anglers owners, Steve Galletta, went over the lay of the land and immediately cracked open a cold Coors Light while rigging our rods up. As everyone arrived we lined up our small army of anglers shoulder to shoulder along one of the few walk-wade access points we could find, given the Bighorn was flowing at 13,000 CFS. What else would you expect a group of 10 guys from Colorado to do? Let’s just say I didn’t really go to Montana to watch a bobber but, the Squirmy Worm bite was lights out that afternoon.

We spent the rest of the evening around the shop where we got to experience our first Bighorn Angler meal and drink a couple beers. The food here was lights out all four days, from Halibut to Ribs for dinner and French Toast to Pancakes for breakfast, we were well fed the entire trip.

As Friday morning rolled around, we were all pretty excited to get on a boat. When you go on these sort of trips it’s so easy to get caught up in just doing the routine thing, so amongst our group we all discussed putting our fate in our guides hands and letting them take us to places they would go if it was their day off. They were all giving hints that taking the boats up the the reservoir and chasing carp could be an experience you have to see to believe. My thought was “Carp? I came all the way to Montana to fish for carp?” so I decided against that idea in favor for a day of ripping streamers. Streamer fishing was pretty darn good, fish were flying at streamers all day long. However, when we got back to the lodge, the guys who went up to the lake were dancing around like little school girls telling us stories of 50-100 fish Carp days all on big dry flies. It only took watching one video before I was convinced on where I’d be spending Saturday.

People who fish a lot know that timing is everything, we all chase legends in hopes of one day finding ourselves in the middle of something that can’t be explained. That is exactly what was happening while we were there. I tried not to set the expectations to high for the next morning as our guide Pete put the boat on the lake. As we began to row out we spotted a fish cruising near the top on the water, I laid a cast out and immediately the Carp keyed in on it, made his way over and slurped my big beatle down. It was unreal, it couldn’t be that way more than a few times I thought. After a few more minutes we spotted another fish and James laid out a cast and boom he was hooked up. We were all at the lake spread around different little coves surrounded by vertical canyon walls so you could here everyone else in the group hooting and hollering when they hooked up. It was the coolest experience I’ve had on the water in a really long time and we owe it all to the guys at Bighorn Angler for making it happen. We were the only boats on the lake. They could have just gone through the motions and floated us down the river and got us into fish all day long, but they made the effort to give us an experience we’d never forget. As the light got tough in the canyon we decided we’d head back to camp and hangout. Pete said he had one more secret up his sleeve that he would like to show us if we were up for getting back on the river a little later. What happened during that evening float isn’t my business to share, but I’ll tell you it was just as special as what happened at the lake.

As our trip came to an end, we said our goodbyes and hit the road vowing to return again. If I learned anything from this trip, it’s you can never bring enough beer around this crew and I’d listen to a Grateful Dead Abel Reel rip all day long. So to Alex, Casey, Chris, Jake, James, Jeff, Matt, Mike D and Mike W thanks for tagging along and wait until you see my mustache next year.