Carp Slam 6 Recap (AKA: Diary of a Net Caddy)

Red flags went up - ‘danger, danger.’ My initial split second assessment of the the situation: “this is not going to end well.”

Carp Slam Recap (AKA the Diary of a Net Caddy)

Net - noun, 1. a bag or other contrivance of strong thread or cord worked into an open, meshed fabric, for catching fish

Caddy - (cad·dy) - noun 1. an attendant who carries clubs or other equipment for a player

“I got a fish on,” squawked the Motorola two way radio hanging from my shirt. The moment I heard this I looked downstream to see if I could see the action. Nothing. The South Platte river flowed clear down a sand bank and made a right turn. My fishing partner was out of sight. I immediately stopped my search for feeding fish and sprinted down the bank. “I’m down by the trestle,” barked the radio.

Clint Packo was my partner in the Denver Trout Unlimited Carp Slam. When I first found Clint with his first fish of the slam on the end of the line, things didn’t look good. Clint was the pro in the pro/am fishing tournament equation. What didn’t look good at first, only got worse. 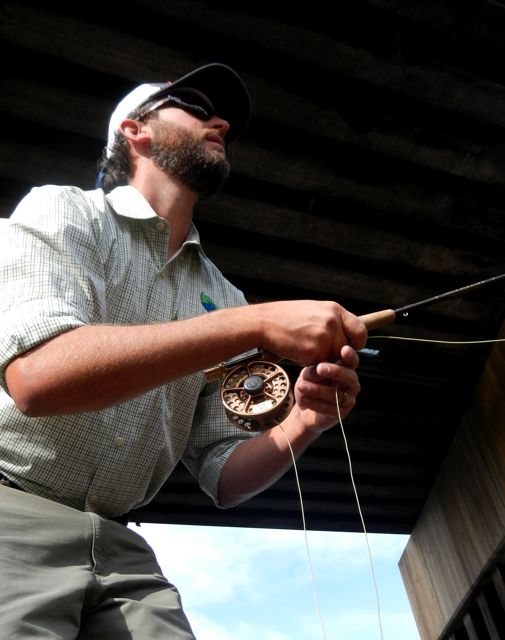 This was the fourth year in a row I’ve competed in the Carp Slam. For the past three years, I have not been able to bring a fish to hand. This is a fact that I’m often reminded of by my fishing buddies. This tournament is always a tough one for me - carp fishing is difficult in general and when you constrain it to specific beats and 30 minute fishing intervals, the skill required to be successful intensifies. This point is proved out just about every year statistically as more than 60% of the competitors - both pro and am - get blanked.

To put it in the immortal words of the Beastie Boys, to be successful at the Carp Slam you need the “Skills to pay the Bills.” 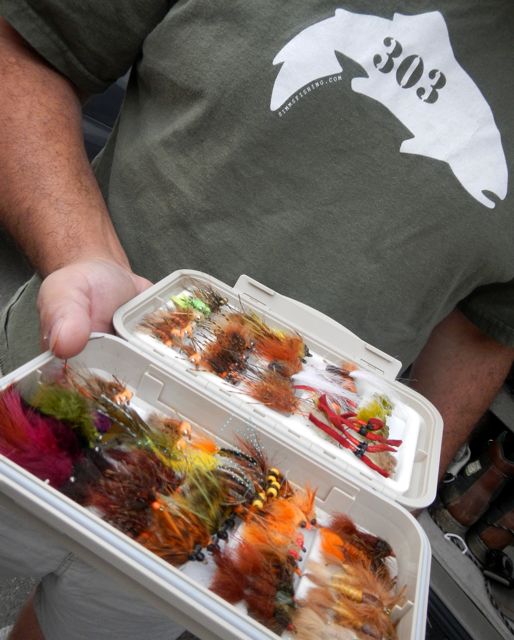 As I ran up on the scene of my partner and his hooked fish, warning bells went off immediately in my head. Red flags went up - ‘danger, danger.’ My initial split second assessment of the the situation: “this is not going to end well.”

Clint was somehow wedged between the steel girders of an ancient, rusty train trestle. His was arm was outstretched holding his rod that bounced with the electricity of a big fish. As I tried to figure out what was going on, I slowly followed his fly line. It went back through another girder in front of Clint and then looped back around the next. As I got closer and looked through the water I could see it then looped back again under the next girder. The fish was literally weaving the length of the entire bridge structure.

The only other fish I’ve seen do this were tarpon under a bridge expanse in the Florida Keys.

Clint was un-wedging himself from the bridge and passing the rod to his other hand trying to follow the fish when I made it to him in the water. He was beyond waste deep as I grabbed the net from his waste pack.

“How’s it look like I’m doing?” Clint asked back rhetorically.

At that moment the fish surged and his rod literally began wrapping around the bridge girder. It slapped twice against the metal of the bridge and I winced.

Best case: this fish was going to break off at any moment. Worse case: the 6 wt/4 piece rod in Clint’s hand was going to fracture into a 12 piece.

‘Game over,’ I thought to myself. I stood in the water and looked on as a spectator. There was not much I could do - Clint was on his own. I was there to give moral support and then most likely condolences when this hot mess came to an abrupt ending.

And then something amazing happened. Clint was able to un-leverage the torque on the rod and he passed it to his other hand. He then weaved his way to the other side of the girder, passed the rod back to the other hand and repeated this. There was suddenly light at the end of the tunnel.

I snapped back into action and headed down stream with the net. If Clint was able to get himself out of this predicament, the fish was most likely headed downstream. I got into position, watched and waited.

Sure enough Packo was able to extricate himself from the bridge and he and his fish popped out into the middle of the run which was just over hip depth. The fish then bolted downstream and Clint followed. Water exploded everywhere.

The fish made another run at the bridge abutment - again. This fish was big, and smart and had obviously used the ‘I’m going to wrap you up in the bridge’ technique successfully in the past. I don’t know for sure but it seemed like Clint made a decision that he was not going to let that fish back into the labyrinth again - come hell, high water, or broken tippet. He held the fish hard and his rod arced over in a way caused those warning bells to go off in my head for a second time. “Well, that was exciting while it lasted...” I thought to myself, expecting calamity to strike at any moment. 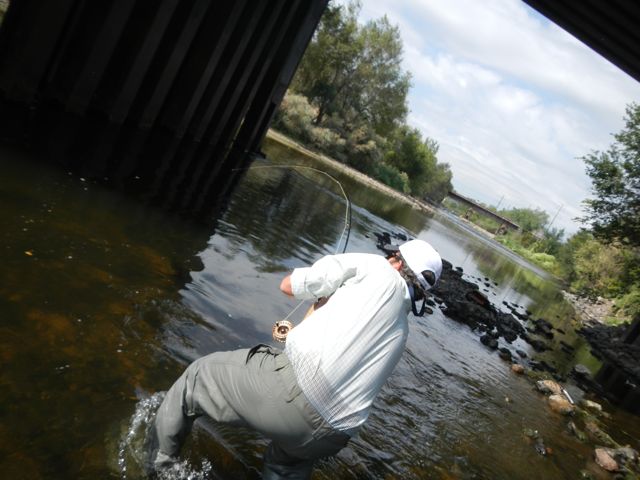 But it didn’t strike. Clint managed to turn the fish back into the current and it made a run downstream, which had a lot less debris and obstacles. After another minute or so the fish’s head and giant shoulder broke the water and drifted into the net I held just a few inches under the water.

We were on the board and on our way to Carp Slam victory - a first for me, a second year repeat from Packo.

Clint Packo has the skills to pay the bills.

Clint reflects on his rod's near death experience

About 20 minutes later I stood in a shallow run upstream from “disaster bridge” and watched two smaller fish move up toward me. I had just changed bugs and put on a worm pattern that was much smaller than what I had thrown earlier. My first cast was not on the mark. The bug wasn’t heavy enough to get down and swung too high in the water column and too fast for the fish to take notice. They passed slowly and I waited. Once they were about 25 feet ahead of me and upstream, I made a short roll cast with the Scott S4s I was using and dropped the bug 10 feet in front of them. For me, this was the equivalent of a hail mary pass. I stripped my fly line twice to get the slack out. 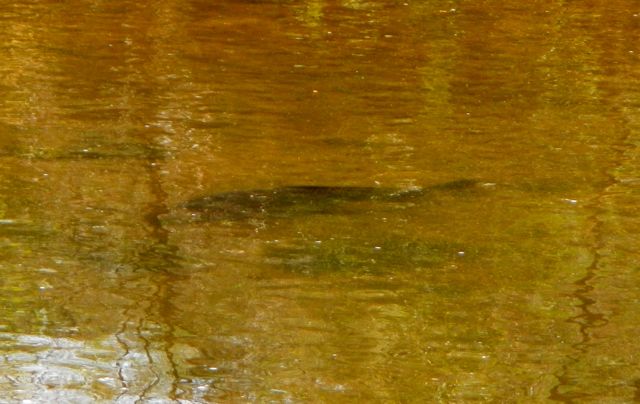 I couldn’t see my bug. I could barely see the fish with the angle of the morning light as they moved away from me. I was fishing by braille.

I made one additional strip when I thought my fly might be in the kill zone - the line went tight. The hooked fish made a quick run into deeper water. When I tried to put the brakes on I thought I initially had foul hooked the fish. He came out of the water a bit sideways which is a tell tale sign of a fish not hooked in the mouth. As soon as he came into sight I could see that my tippet had somehow wrapped around its’ gill plate. He made one big head shake, popped the tippet off and headed down stream unencumbered with my fly in its’ mouth. I don’t need to go into too much other detail here as the rest of the drama was caught on video by a DTU official on the bank.

As far as numbers and statistics go, this year there were a total of 15 fish caught - 3 of those by my partner Clint Packo. This compares to 16 fish caught in 2011. Clint also nailed the biggest fish of the tournament - a hulking 30” common carp. Nine out of 30 competitors got on the board. As far as the “exotics” go, there were a number of smallmouth bass that came to hand which is another great sign that this species is naturally reproducing successfully in our river. The other big winner of the day: Doug Long. Doug and his network of friends, family, and business associates single handedly raised $2068 for the river - a new Carp Slam record.

For me, the Carp Slam has always been about raising awareness and money for the South Platte River. Secondarily to that, it is a great way to spend a day on the water, compete, learn new things about fishing and hang out with a great group of people. And then, when I’m on the water with a clock ticking down in 30 minute increments, I try my damnedest to create a situation where luck and skill intersect and it all comes together.

For guys like Clint Packo, Luke Bever, Scott Demoss, Cody Muchow, and Tyler Steward (second and third place teams) who bring and overabundance of skill to the table, it is a great thing to watch on the water.

And as the old saying goes, for me, sometimes it is better to be lucky than good. Till next time... 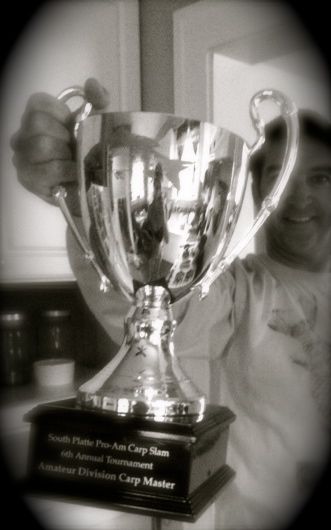