Cold Hard Truths Part II: Why you should give a sh%# about freeing the Snake 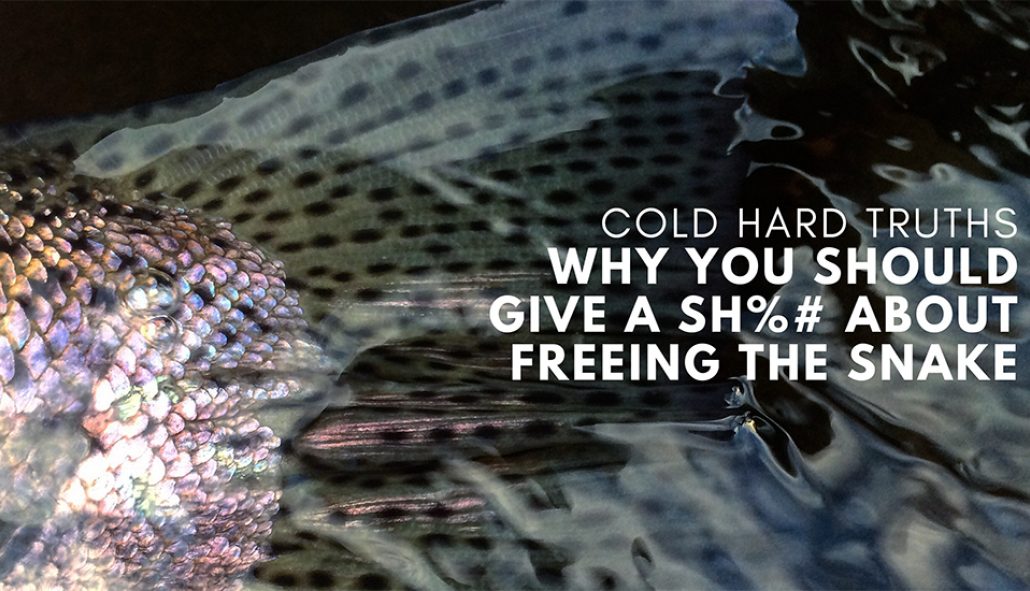 And so it begins. Depending on how much you follow news and fly fishing media, you may have heard about a growing initiative that emerged in the first week of February that, at first glance, may have warranted little more than a headline glance, or double tap on an Instagram post. It may have read something to the effect:

It may have just been a grip-n-grin post of a salmon or steelhead, a fish you may not ever fish for, and on some river you have not even heard of. It would likely be followed by an entirely too long caption with buzz words like “special” “unicorns” “#freethesnake” etc.

And if you’re a reader from Colorado, you might not give it much more thought than that and scrolled on down the feed.

But the cold hard truth I am writing today is you should absolutely care about removal of the lower four dams on the Snake. This is the start of what could be a watershed moment in conservation- every bit on par with Pebble Mine. And judging by the numbers of “No Pebble” bumper stickers I’ve seen over the last 10 years, I’m sure plenty of you took notice of that particular issue.

The importance of this issue outweighs region or target species interest. I would even go so far as to say it outweighs anglers or sportsmen and women. But a river’s greatest protectors will always be the people who have experienced it firsthand. So, with that in mind, here are a few points to consider, which I hope will inspire you to take a little time to help the cause—even if you are many state lines away from this river’s bank.

Without a doubt, Pebble Mine’s ongoing fight is incredibly important. That is about protecting a vibrant and essentially untouched ecosystem from being irreparably disrupted. The fight for the Snake is about restoring a drainage that is already disrupted, hopefully not irreparably, and its severely depleted wild fish stocks.

The Snake River is the largest tributary of the Columbia River System. This system was once the greatest salmon and steelhead super-highway the world will ever know. There are legends of paddle boats in their era literally becoming choked by fish, slowing the craft’s journey upstream (the fish too, I suppose). But today, many wild anadromous fish populations, especially in the Snake’s tributaries, are down as low as 1% of their historical numbers.

The cause of this depletion is complex, and certainly not due to one single factor. Habitat degradation, oceanic changes, long history of over harvest and hatcheries all contribute. But the impacts of dams halting these fish’s journey that requires upwards of 1000 miles and 7000 ft elevation gain in some scenarios is especially daunting in enabling their successful reproduction.

“Fifty percent of the wild salmon and steelhead spawning habitat in the Lower 48 is in the Snake River drainage. And science suggests these fish’s populations might be beyond recovery within the next 16 years… that’s four generations of salmon.” says Kirk Deeter, Editor-In-Chief of Trout Unlimited Media and Editor of Angling Trade. “There’s real urgency here.”

It’s a bit like these fish have been circling the drain for decades, and only right before the ultimate flush we are trying to pull them back from literally the brink of extinction.

Buckle up, this won’t be easy.

The fight for dam removal is far from new and has always been highly contentious. Whereas Pebble and Bristol Bay directly touched a smaller community from a population perspective, the Snake impacts multiple states in the Pacific NW, offers irrigation and shipping that supports a regional economy, and provides hydroelectric power to dense population centers. And it is going to be expensive to undo. Like tens of billions expensive.

Getting over these hurdles will not be easy and will require a coming together of all sorts of interest groups: conservationists, environmentalists, anglers, and non-anglers from all over the country. Think about those scenes from Braveheart, Lord of the Rings, or Game of Thrones when different factions come together before the war. Time to heed the battle cry.

“I’m also in Colorado,” Deeter continues, “but if someone told you that 50 percent of the spawning habitat for wild fish in the Rockies were in peril, you’d hope that other anglers from all over the country would care and help out.”

Kirk’s point: If we want any chance of saving these fish, the time is now, and it’s going to take a whole community rallying, just like with Pebble Mine.

First off, the fight for Pebble is far from over. But with recent big wins, this is the perfect time to recognize that our community can make a difference.

The good news is that this project seems to have support from both sides of the political aisle. Mike Simpson is a Republican Representative and the current tip of the spear in what represents a growing bipartisan coalition of congressional leaders and state governors in supporting Simpson’s call.

“The good news is that—like Pebble Mine—this campaign is winnable,” Deeter continues. “Congressman Simpson taking the lead from the Republican side will be joined by many others from his party and the Democrats too. The results will be tangible.”

Additionally, a win given this initiative’s magnitude will provide a windfall for dam removal and become a litmus test for the benefit. The four proposed dams on the Snake are very much functional, but the EPA estimates there are over 2 million dams in the US and of those between 75-90% “no longer serve a functional purpose”

When I would guide and talk to clients about this issue, I could often sense Colorado or Rockies centric anglers struggled to wrap their heads around the problem with some dams. Afterall, many of our best fisheries are tailwaters. But the cold hard truth is there are parts of our country where dams are playing a major role in fishery decline. Nothing encompasses this issue greater than the Snake River.

“If you take away these dams, these fish rebound. If you don’t they go away,” Deeter concludes. “It’s a matter of working together to figure out how to avoid the latter.”

One thing is certain. One day there will be a fight in your backyard, and when that dust-up happens, you are going to hope someone from several states away stands behind you, regardless of if they plan to ever fish your home river.

Here’s how you can help:

Blue Square: Join a conservation group, such as Trout Unlimited, and volunteer your time to local, regional and broad-based efforts. If you’re already a member, we encourage you to be active. Small daily acts in your community matter too!

Socialize the cause at your next campfire, happy hour, family BBQ or water cooler chat. Take the time to tactfully educate and evangelize—even non anglers.

Black Diamond: Immerse yourself in the important history, science and impact of salmon and steelhead recovery. There is no shortage of books, documentaries, articles, and studies on the subject. Get involved with organizations within the region of the PNW. Stay after it!

Some other organizations/sites to look into: Save our Wild Salmon, American Rivers, Sierra Club, Wild Steelhead Coalition

If you’ve never traveled to the region to fish, go do it. The most passionate advocates for a river are those that have experienced it firsthand.

These rivers are pretty magical.

Reid Baker is a front range weekend warrior, PTO destination angler, dedicated conservationist and a dabbling writer whose work has also appeared in The Flyfish Journal. When not fishing or planning his next trip, Reid also serves on the board of Denver Trout Unlimited.

If you missed Part I of Reid’s new series CLICK HERE.