Come Get Your FRESH CO SLAB!

Here is a random sampler of some of the photos that caught our attention so far. The contest ends tomorrow so there is still time for submissions. Thank you and enjoy some great fishing sights and stories from the great state of Colorado! 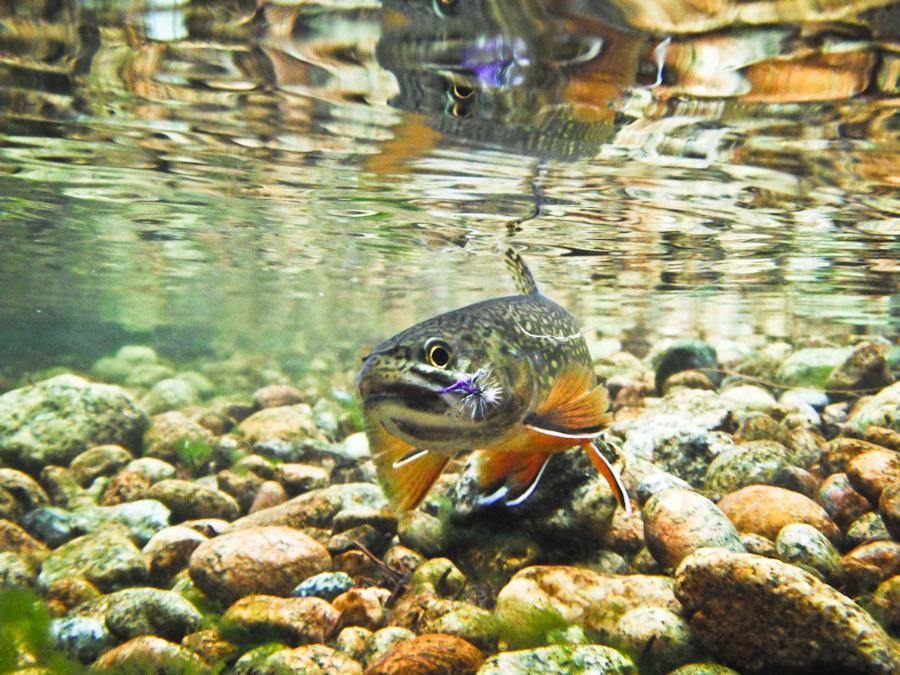 Photo and words by Kevin Fricke: “This fish was caught by one of my first attempts at tying my own flies. It's a purple body Parachute Adams that worked great for me - Fujifilm XP10 point and shoot digital camera for my photo gear.” 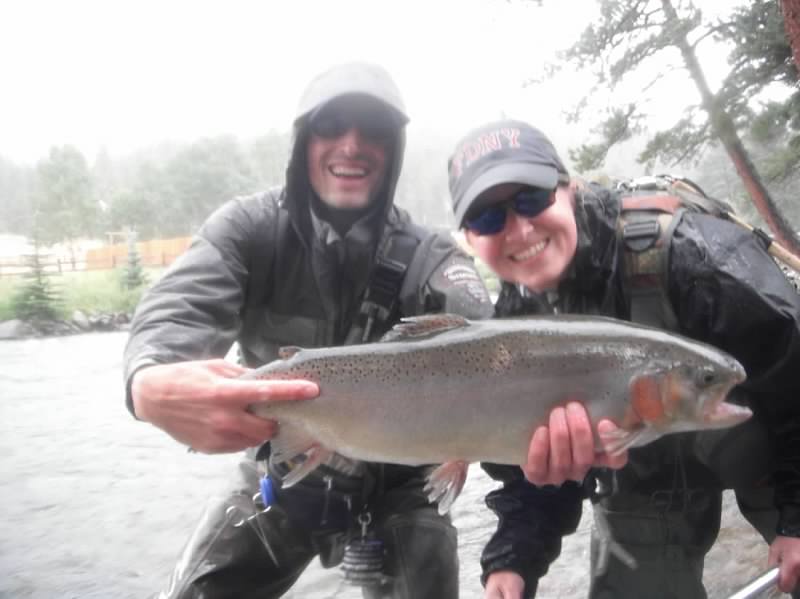 Photo and words by Jennifer Rieske: “This fish was a shock when Jeff, our guide, netted it. The clouds just opened up on us and the rain was coming down in buckets. I was allowing my line to float down to a small waterfall and as I pulled up to recast, my Sage rod bent almost in half. I thought I was snagged but then the big guy started to run. He didn't go far and I was able to get him to the shore pretty quick. Jeff started yelling as got the trout in the net. I ran down to him and couldn't believe what I saw. We took a few pictures, then let him swim away for the next angler to have another once in a lifetime moment.” 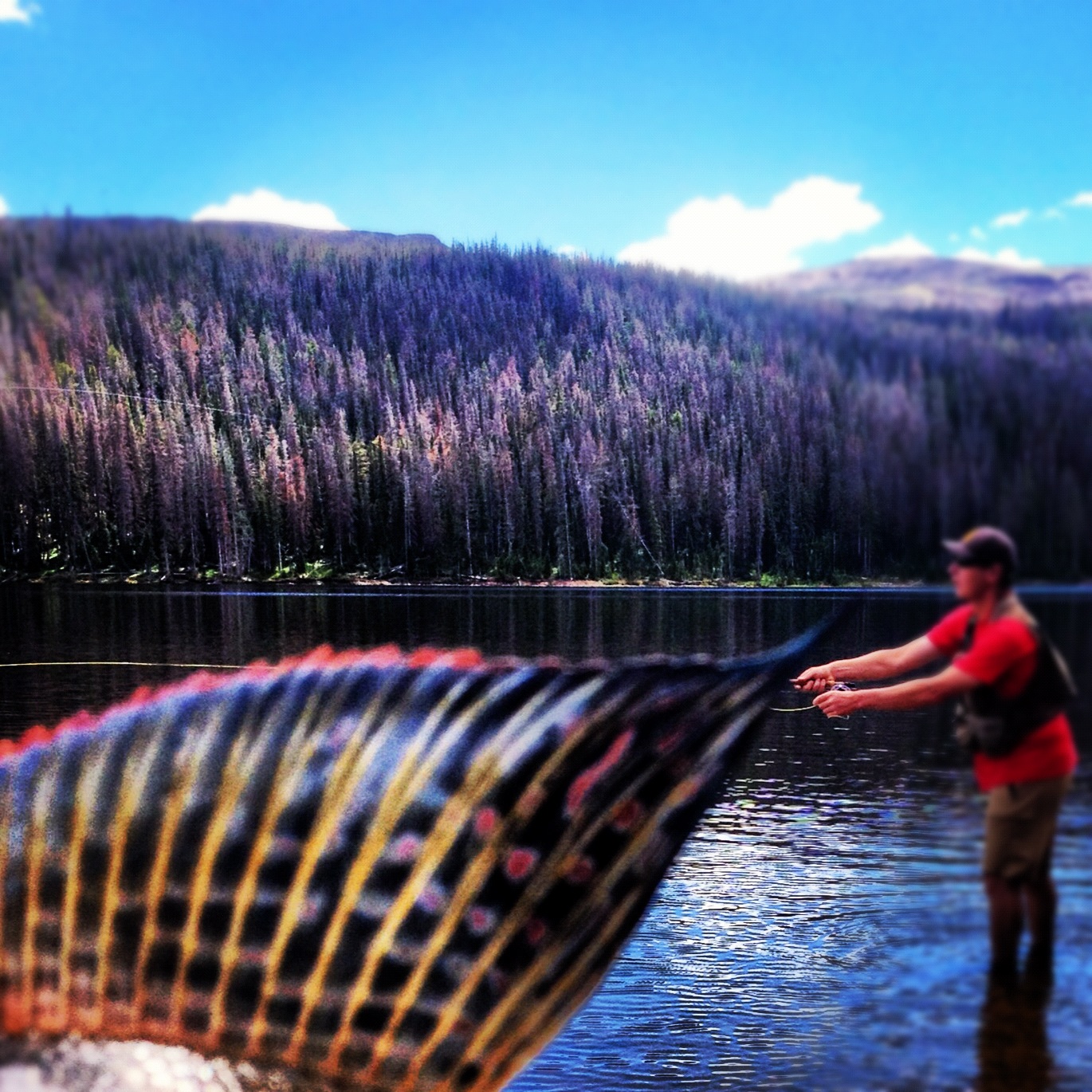 Photo and words by Steve Tatarchuk: “The attached image was taken this past week here in Colorado. My friend Bryon had never caught nor seen a grayling before. Colorado offers several opportunities to catch these eager-to-eat fish, so away we went on our quest. I was casting a pair of dries including a sz 22 grey Griffith's Gnat and a sz 16 parachute Adams--flies found in nearly every dry fly box. To me, this photo represents the myriad of beautiful views, fish species, varied waters, and ways that anglers can gain new experiences fly fishing in our state. All fish were released without harm and are available to the next anglers who visit this lake, whether it be a parent and child, a couple, or just two friends getting out and enjoying the mountains and some good times."

Photo and words by Jeff Johnson: “two reasons for this carp being a good one:

1) first carp on a fly rod (i felt more a part of Denver Trout Unlimited after i got this guy).

2) i caught this fish in a completely different manor than everyone was telling me in how to fish them. Truly caught on my own. It wasn't a fluke because i got a couple that night.” 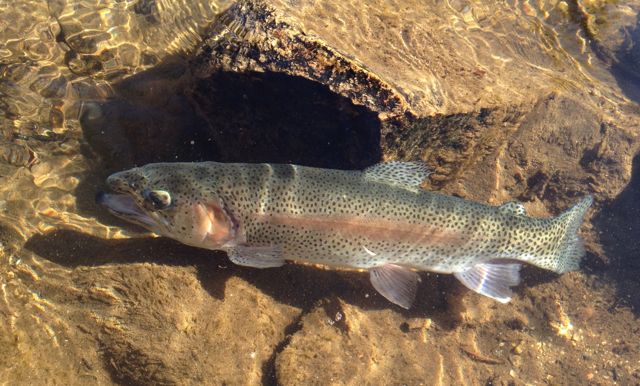 Photo and words by Darren Marshall: "The rainbow in the water is a fish I released for my father during last month. It was 23" and just over eight pounds - one of the largest rainbows we've ever caught in Colorado. We were lucky enough for it to hang around for a few seconds in the landing pool in front of us so I could snap a few shots."

Photo and words by Derron Fricke: "My brother and I got out today and tried new water - always good to get out on a ht summer day to the cool mountains and try and fish water not known to you. Caught with a Sage ZXL 486-4wt and an Abel Super 3N Reel. Photo taken with an Olympus Stylus 550wp camera.”

Photo and words by Martin Politte: "I wanted to enter a kokanee salmon picture from the fall into the picture contest. We nicknamed this 'the Vampire Salmon', and is one of the best and toothiest transformations I've ever seen. My buddy Darin caught this during the salmon run in late September on an orange egg pattern. Darin was just learning to tie his own flies and had purchased a very inexpensive starter kit. After just a few hours of landing salmon his hooks looked more like beat up, bent paper clips with orange fuzz on them than egg patterns any more, but the kokanee still took them just the same. " 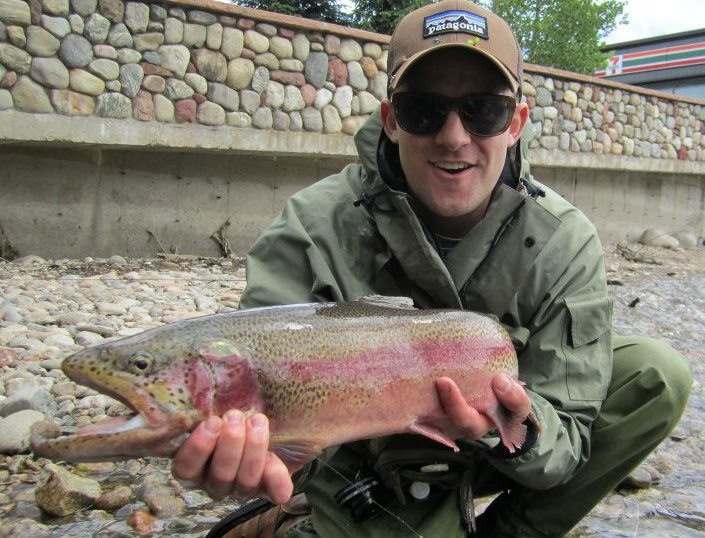 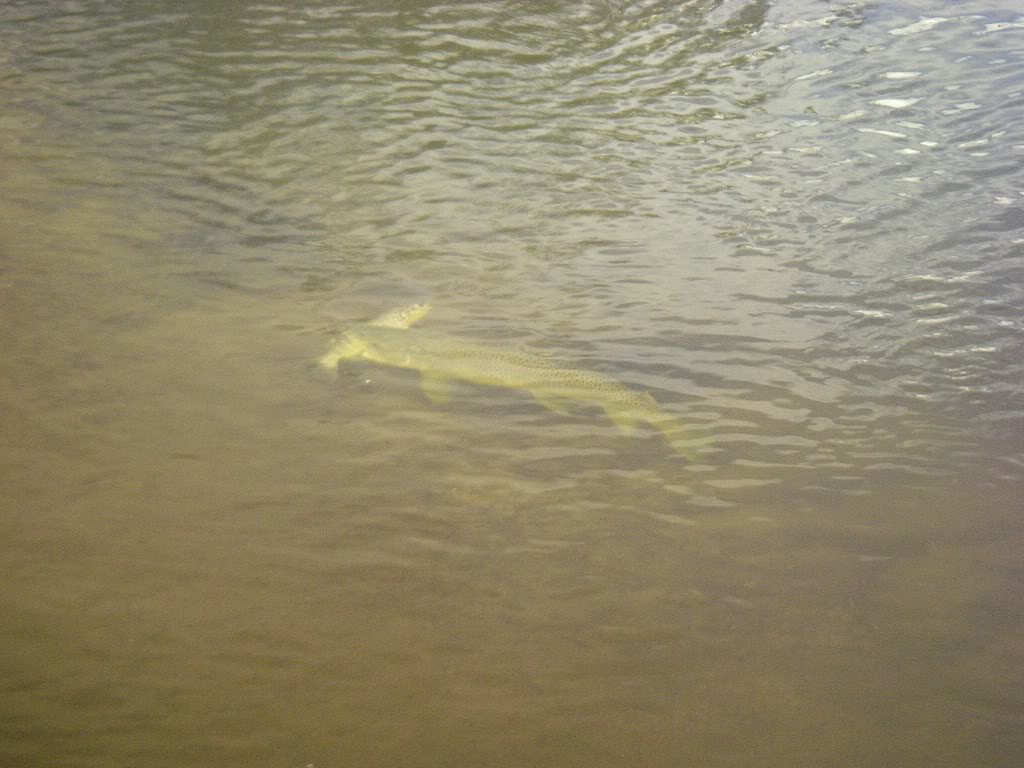 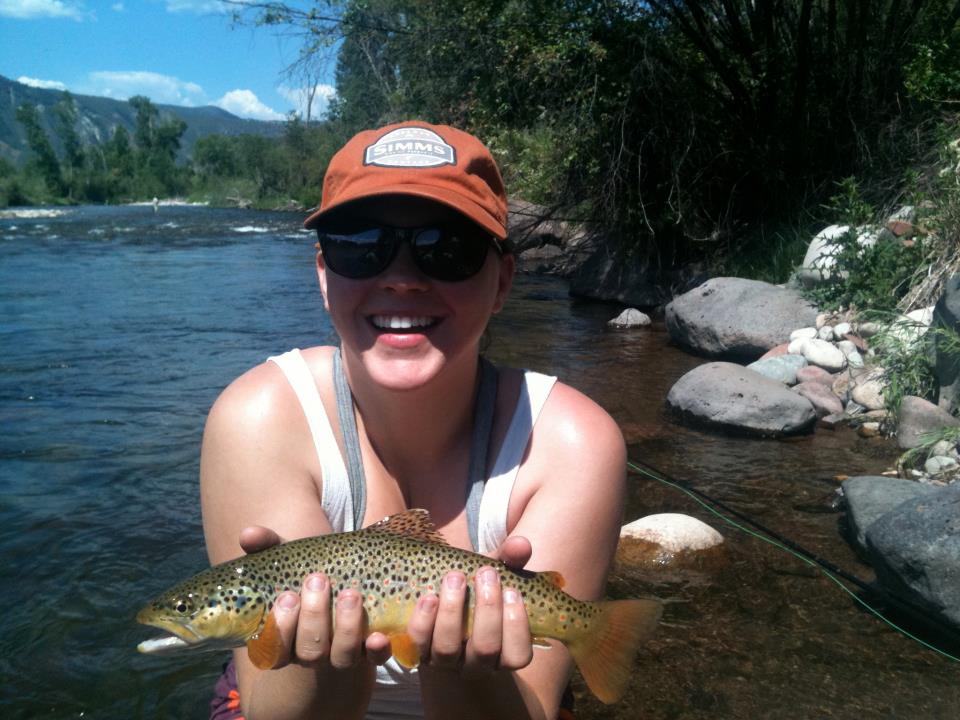 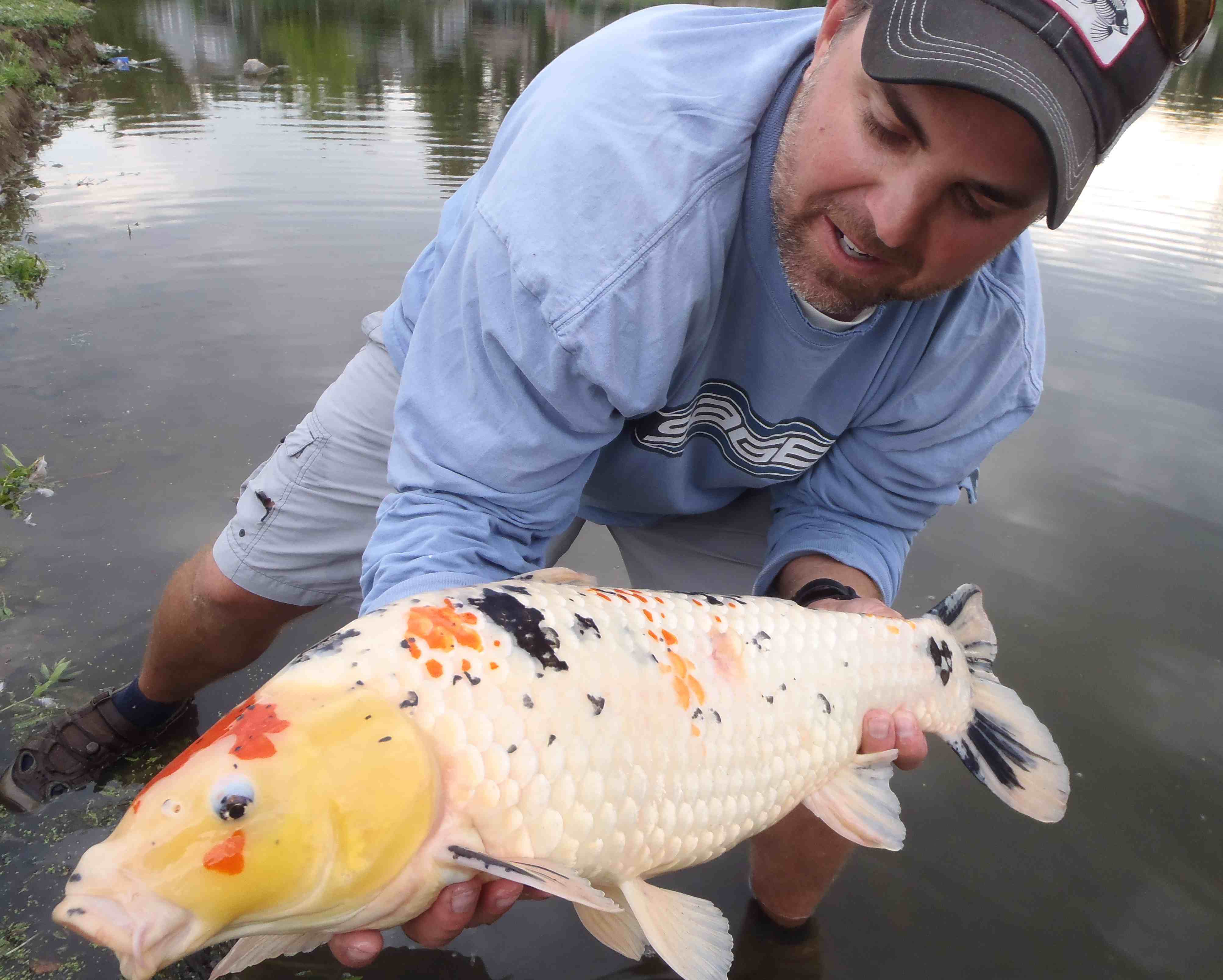