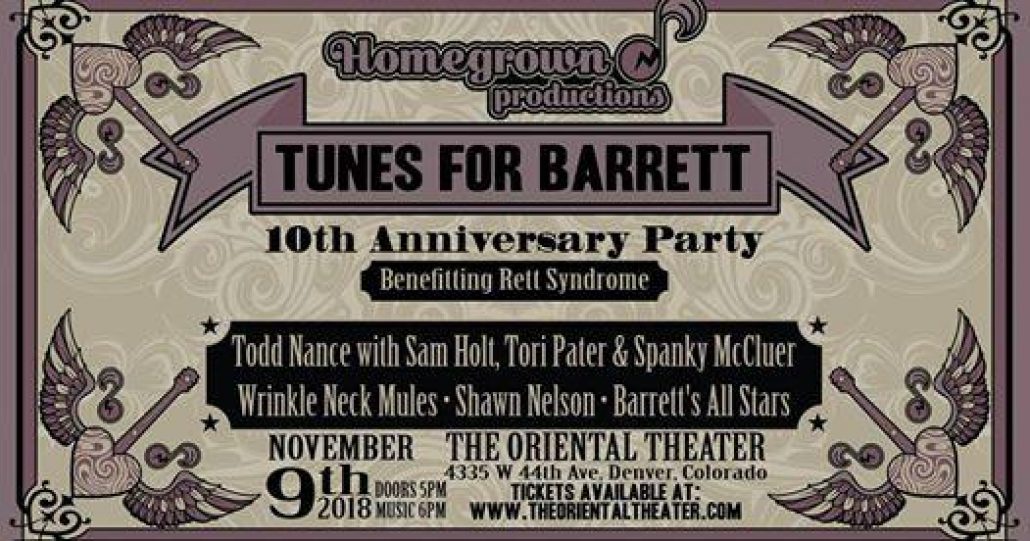 Ed, a friend of the shop, reached out to us about the 10th Annual Tunes 4 Barrett fundraiser that he's throwing on November 9th at the Oriental Theater. Barrett, his daughter, was born with an A-Typical Rett Syndrome called CDKL5 variant.

Rett Syndrome (RTT) is a unique neuro-developmental disorder which begins to show its affects in infancy or early childhood. It is seen almost exclusively in females, although it can occur rarely in boys. The disorder severely disrupts the development of gross and fine motor skills as well as robbing girls of their ability to speak and communicate with the outside world. Seizures and breathing problems can also be prevailing symptoms.

For the 10th year in a row, Barrett's family has organized the Tunes 4 Barrett fundraiser. Performers for this year's event include Todd Nance (of Widespread Panic) & Friends With Sam Holt & Spanky McCluer, The Wrinkle Neck Mules (of Howler Brothers fame), and the Shawn Nelson Band. Music starts at 7:30 PM, but come early because the Maine Shack will be serving Lobster Rolls and RMZ Colorado will be presenting about CBD and Cannabis products that help children with seizures among other things.

All the proceeds will benefit Rett Syndrome!