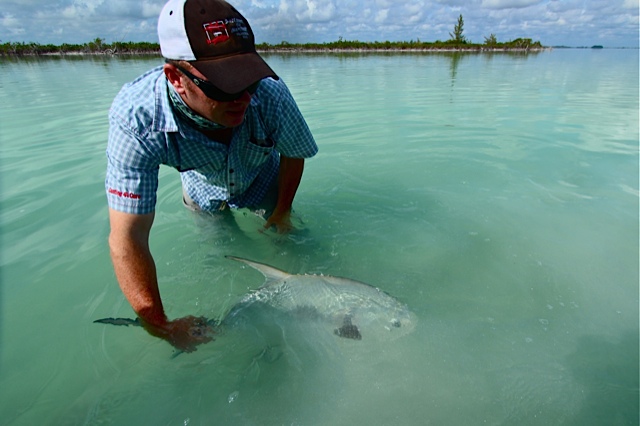 Tom Bie releasing a permit - courtesy of the Drake Magazine

Tom Bie from the Drake Magazine just stopped into Trouts to get geared up for his trip to Christmas Island. He’ll be chasing giant trevally and probably seeing a ton of other exotic saltwater species. We thought this would be a pretty good time to share the Drake’s latest photo contest with the Trouts contingent. The contest is called The Big Year Contest. Here’s how it works, courtesy of our pals at the Drake:

“Since the 1930s, the world of birding has held an informal contest to find out who can see or hear the largest number of species of birds within a calendar year. They call this contest The Big Year, and we thought it was time flyfishing had its own Big Year. Our contest will be run through Facebook, Twitter, and Instagram. It is open to anyone, and the rules are simple: Post a picture of you with your fish on The Drake’s Facebook page (there’ll be a special spot/app for entries). Whoever posts the most different species of fish, that they caught between April 26, 2014, and April 25, 2015, on a fly rod, will lay claim to the Grand Prize loot.” – drakemag.com

Knowing the Trouts crew the way we do, there is a very solid chance we have customers and clients that will be contenders in this contest. You have an entire year so get out there and get after it. For all the rules, fine print, sponsors and prizes CLICK HERE.