Embrace the Skunk: A Belize Recap 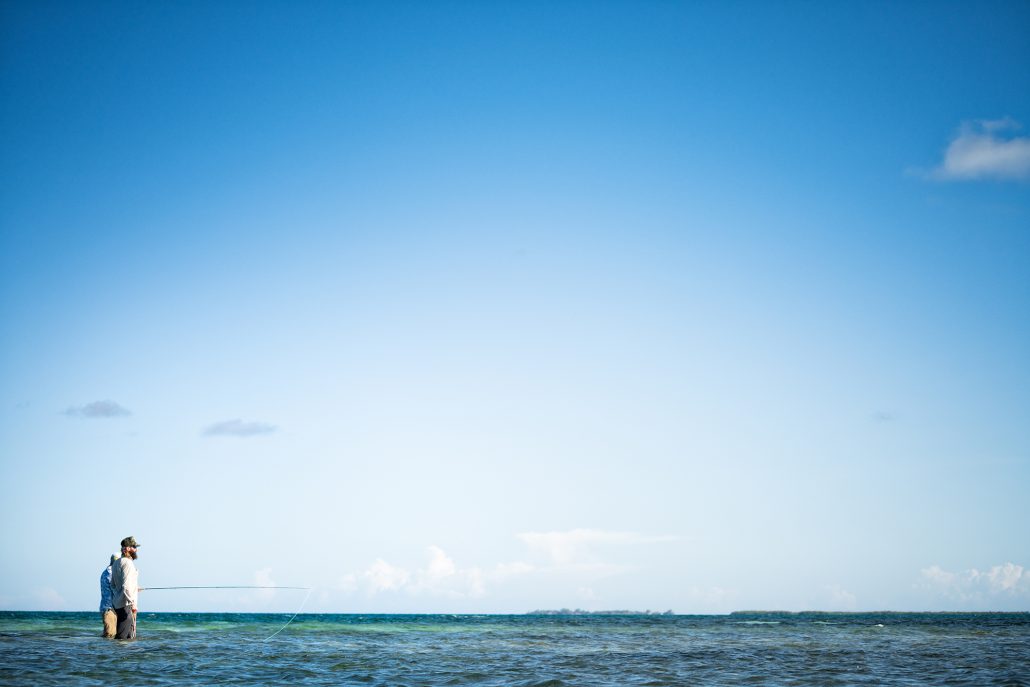 Little did you know, but Ole Blue Eyes wrote that about me and permit fishing. It's been a couple of weeks since I got back from Thatch Caye in Belize and I've been avoiding writing this here little recap for a little longer than I'd like to admit. Why? Because I wore the permit skunk pretty hard and it wasn't for a lack of chances. Which means, I suck. I don't know many anglers who like wearing the skunk, especially when presented with a countless number of shots over the course of our five days on the water. Especially when every flat we stopped at seemed to have tailing fish. Especially when you feel the line come tight as a permit tails on your fly and you come up empty.

Prior to the trip, I talked to a whole mess of experienced permit anglers who had gone through long permitless slumps. So, I wasn't expecting much. I was certainly prepared. I landed in Belize with leader setups and presentation tips from all sorts of damn good anglers. But, in the back of my mind, I kept thinking - "Permit are permit. I probably won't catch one."

Friend of the shop, Chuck, and I landed in Belize City and jumped on quick 15-minute puddle jumper to Dangriga. Clouds, rain, thunder and lightning all present, our puddle jumper flight didn't feel that quick. After a quick boat ride to Thatch Caye, we settled in for the night. Glancing at the forecast, our first day on the water looked like it was going to be a wet one. It was. Before we were forced off the water, we caught plenty of bonefish AKA dock rats. Lunchtime was spent on a random dock waiting for the lightning to clear. That's when Marlon asked us if we wanted to go fish for permit in the afternoon. Chuck and I said, "Well, yeah."

When we cruised up to the first flat, we weren't expecting to see more than one or two permit. But, four shots and one hour later, we realized this was going to be a different kind of party. As our first day on the water wrapped up, I remember thinking to myself, "Damn, this might actually happen. We might catch permit. Hell, we might catch a bunch." Ole Blue Eyes Frank Sinatra and his crooning were getting the best of me. High hopes.

I was wrong. We didn't catch a single one for the next four days. So, here I am, embracing the skunk. I learned a lot about permit fishing. I got a lot of practice and was able to present to a ton of fish. I even managed to get a couple of eats. It was legitimately one of the coolest five days I've spent on the water and I'm super thankful for that. I'll catch one next time...or not. Probably not. But, maybe.

Our guide, Marlon, was great. He put us in a position to succeed time after time. But, as the old and over-used accurate saying goes, "Permit are permit."

Enjoy some photos from our trip.

Interested in taking a trip to Thatch Caye and fishing with Blue Horizon, look no further than our good friends at Yellow Dog.

A look at the dock and the rod shack.

Ready for anything. From the new Scott Sectors and Loomis NRX+ S to the "old guard" in the Sage X and the Orvis Helios 3D. We were hoping to run into some big tarpon...but the tides weren't in our favor.

Chuck likes long walks on the beach...to the boat to fish.

Marlon whips his panga to pick up breakfast, lunch, beer, and our gear.

Chuck shows off one of the many dock rats we pulled in the first morning on the water.

Then the rain showed up. Someone cue the Charlie Brown Sad Walk. Good Grief.

After the rain cleared, we headed for the permit flats.

tailers. 90% of the fish Marlon fishes to are tailing.

Small bauer crabs were the name of the game. 6s and 8s.

We managed to take bonefish breaks every once in a while, to keep us sane.

Chuck could work on his fish holds.

Siesta spot. Marlon fished us hard. 6AM to 5PM everyday. When slack tide was in effect, we stopped here for drinks, food, and a nap or two.

Trying to wade one out.

Marlon points one out.

One day five, Chuck connected with one.

But, it wrapped itself around the coral. From top of the world to bottom of the barrel.

It wasn't long until Marlon was scheming up another plan get us a fish...

Belikins taste real good after a lot of failure.

So do the family-style dinners.

There are worse places to drink rum.