IT'S THE FIFTH SEASON | Four Rivers To Fish This Weekend! 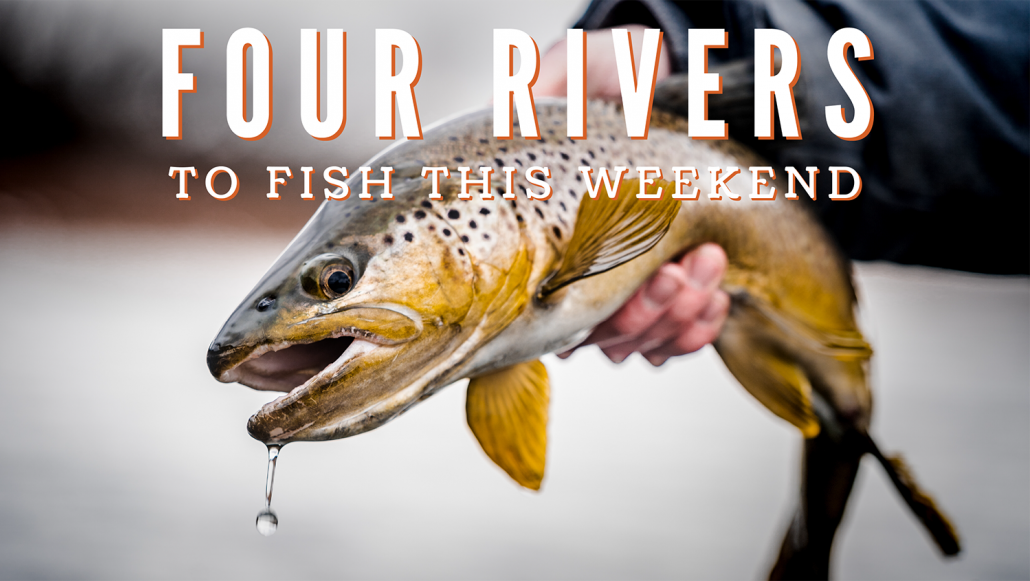 Fly fishing for trout doesn't end when winter comes, especially here in Colorado. However, there's nothing like the change that comes around this time of year as the days get longer and the temperatures get consistently warmer. It's a time that we've affectionately dubbed "The Fifth Season." Sure, it's technically still winter, but with midges, blue-wings and even caddis starting to wake up and move around, it's not the winter that we've slogged through for the past couple of months. Think of it as pre-spring or sprin-ter. It's a time of year when fishing a nymph rig, casting dries to pods of risers, and banging banks with streamers are all on the docket for your typical day. That kind of variety is music to our ears.

I took a quick look at the forecast around the state for the weekend and combined with some primo "sprin-ter" flows, this weekend is shaping up to be a great one to spend on the water. What's not to love about wearing your down jacket in the morning and your short sleeves in the afternoon. I've done a little research for you guys and here's where I'd recommend fishing this Fifth Season weekend.

Cheesman Canyon
If the South Platte is fishing well, we'll never not talk about it. We're lucky to have such a productive and scenic fishery so close to home and with the recent warming trend, Cheesman Canyon (and Deckers) have been fishing very well. With highs in the mid-to-upper 50s over the weekend and a mix of sun and clouds, fishing will continue to impress in the Canyon. We're starting to see Blue-Winged Olives and big Spring Midges play larger roles along the Platte and fish are starting to become more active. Additionally, more and more fish are holding in the seams adjacent to the swift water and they're focusing on those BWOs and Midges. I think we're still a week or two out on seeing fish consistently rising to Blue-Wings, but if conditions are right (AKA clouds and water temps) I wouldn't be surprised if a pod or two would pop up on the South Platte this weekend. As always, bring your leeches, eggs, San Juan Worms and stoneflies.

Middle Arkansas River
What's not to love about the Banana Belt this time of year? Great weather. Great flows. Great bugs. That's a lot of checked boxes for the old Arkansas River when Fifth Season comes rolling into town. Take a mix of sun and clouds, stir in some temperatures in the mid-to-upper 50s, and squeeze out a flow of 214 cfs at Salida. That's a recipe for a damn good weekend on the the Arkansas. I fished it last weekend and saw midges on the surface all day long with a wayward blue-winged olive mixed in here and there, as well. By the time late afternoon rolled around, there were fishing plucking emergers and slurping dry flies off the surface. Soft hackles and Griffith's Gnats were the tickets. I found the most success swinging soft hackles and working downstream. Those plucky, but surprisingly strong Arkansas browns were "no doubting" a swung size 18 soft hackle PT. Subsurface, you'd be doing yourself a favor if you tied on a psycho prince, rainbow warrior, small stoneflies, and a biggish zebra midge.

11 Mile
The Fifth Season and 11 Mile go together like coolers and beer. For whatever reason, the fish in that canyon are more willing to rise to a dry fly than your average trout and they tend to do so in the spring with great vigor. With not much of the old evil "W" word forecasted to show up and more of that pleasant Fifth Season mix predicted for this weekend, I'd lay good money that you'll find rising trout in the Canyon this weekend. Be prepared with midge and blue-wing dries (because you never know) and a longer leader and a little bit of dry shake. Of course, the standard sprin-ter subsurface fare will do the trick (midges from size 18 to size 24, attractors, and blue-wings) and even a small flashy streamer will do the trick as you get further downstream from the dam. But, go to 11 Mile for the opportunity at rising fish.

Colorado River
It always takes the Colorado a little bit longer to wake from it's winter slumber, but if you catch it as it starts to free and warm up....oooo weee. Blue-wings (especially in the middle section) are pretty far off, but as the old saying goes "if you give an inch, Colorado River trout will take a mile." If those middle Colorado River fish get a glimpse at warmer weather, they get super active in those longer, deeper runs. I've typically had success this time of year in what you'd typically classify as winter water (big, deep, slow water), but fish tend to be feeding very actively in that water. Chartreuse eggs, stoneflies, soft hackles, bigger zebra midges, rainbow warriors, and small BWO patterns will all produce fish on the big C. Throw streamers deep and slow. You can put a gang of fish in the net this time of year on the Colorado. If you find one, you've probably found a whole lot of them. So, be patient and precise.