Fightin&#8217; Lunkers: How To Play And Land Trophy Trout 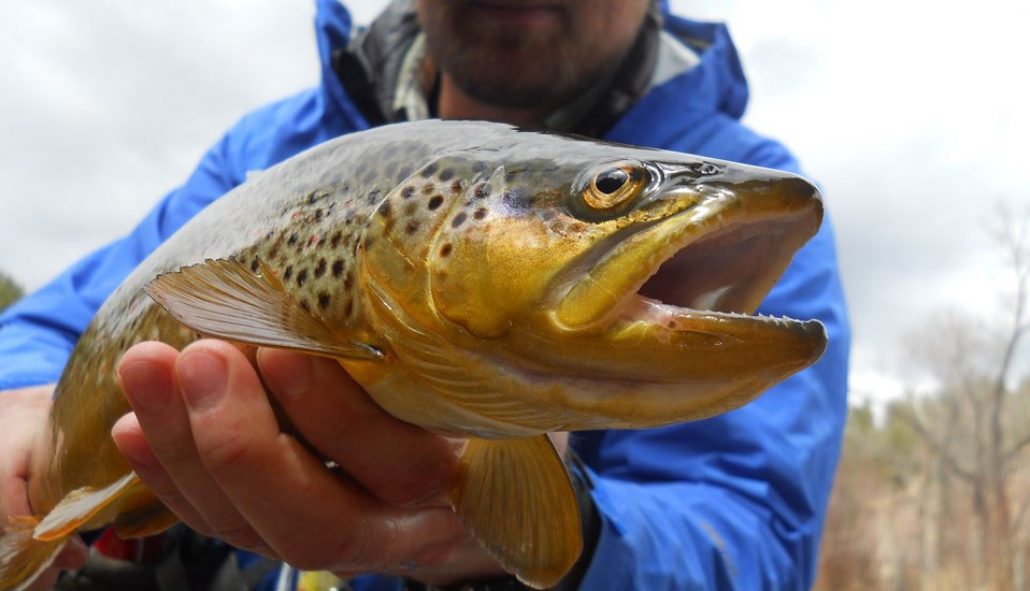 Big trout are truly something special to me. Not that all trout aren't, but there's just something about those really big ones that has forever fascinated me. I find myself thinking about their lives, how many years they've spent in the river, where they're favorite place to be in the river is, how much of the river they've explored, what they're favorite thing to eat is, how many times have they been caught....I could go on, and yes, I realize that probably sounded a little weird to many of you but I don't really care. Big fish fascinate me. Like has been said about any trophy game species, "They don't get big by being dumb" and perhaps that sums it all up. So when I have the opportunity at first hand experience with a large fish, whether I caught it or whoever I may be on the river with, those moments mean alot ot me. As soon as you return that trophy to the water and it slips out of view, the clock starts over again. The clock I'm referring to being, when you'll get the chance to repeat that event. The great thing about fishing is that we don't know. It could be the next cast, it could be the next year, it could be 5 years down the road...we just don't know. All I do know, is that every single one of us who calls themself a fly angler has one thing in common...with every cast we make, we're one cast closer to that next big one. That's motivation enough for me.

But I realize you all aren't here to read about my sappy feelings regarding trout so let's move on to the good stuff...what the hell to do once you hook a big one and it's going ape sh!t down the river and peeling line off your reel like you've tied into Nascar. Fighting big trout is totally different from fighting their smaller counterparts and so should be your tactics for getting them in the net. Below I'll list out the top mistakes I see people make when fighting big trout.

We'll start at the top, literally, with this.

1. Be prepared- This starts between the ears for me. The number one thing I try to focus on (or get my client's to focus on) when a large trout is on the end of the line is to stay calm! Whether it's what you're watching on TV or seeing firsthand on the water for yourself, I'd swear most people can't fight a big fish without being vocal throughout the entire fight. "Oh man this is a GIANT!" "Oh come on baby, don't run don't run!" "Holy crap this fish is HUGE!" or my personal favorite "Big Fish! Big Fish! Big Fish!" I'm sure you can picture what I'm talking about. I firmly believe as soon as you start psyching yourself up after realizing you have a big fish on, you're no longer totally paying 100% attention to fighting the fish. Big fish are exciting don't get me wrong, however there will be plenty of time to celebrate once it's landed. Staying cool, calm and collected throughout the fight is one of the biggest keys to success in my opinion. Start experimenting with this next time you're on the water with your smaller to medium sized fish. Really try to hone in on exactly what that fish is doing every second of the fight. With a little practice, I think you'll start to land fish much faster and more efficiently. (which we'll discuss later on below)

2. Stay with the fish- I think this might be the number one reason the majority of big fish are lost. People let them get downstream of them. This can be especially detrimental to success in Colorado where some of the biggest fish landed each year come on very tiny flies. Once a fish is well downstream, the amount of pressure on your hooks/knots is only amplified by the force of the current now working against you. Staying even (or as even as possible) with the fish will help immensely. Take an angry 20+ inch fish, add the pressure of a couple hundred cfs of current, paired with 5x tippet and size 18 fly....it doesn't take long to figure out the typical outcome. Staying even with the fish will sometimes mean covering quite a bit of ground during the battle. I've had even average fish in the 17"or 18" category take me 50 or 60 yards downstream when they get the current behind them. Be prepared to get moving once the fish is hooked and you're chance for landing it will increase significantly. Once a fish of any size is downstream, it's rarely going to willingly swim back upstream towards a 6 foot tall pile of Gore-tex with a 9 foot long arm.

3. Know your angles- This is as important as anything. The angle at which you're holding your fly rod when fighting a fish makes a very big difference. Throughout the fight, you want to be exerting the maximum amount of pressure as possible on the fish. The way to do this is to keep your rod at an angle, as opposed to straight vertical. Picture the statue of liberty holding a fly rod....now don't ever do this in your real fishing. Except for in an instance where the fish is making a large run (where holding the rod high and vertical can be acceptable), you're rod should always be held slightly "off vertical" and in the direction opposite the way the fish is facing. You may have never noticed this, but if you watch an experienced angler fight a large fish, he or she will constantly be moving the rod from one side to the other. If the fish is moving right, pressure is being applied to the left. If it's moving left, you can bet that rod will be tilted off to the right. Not only does angling the rod add more physical pounds of pressure to the fight, I also believe it will mentally wear down the fish faster if every time it goes one direction, it gets pressure from the opposite direction. Holding the rod vertically adds very little pressure to the fish and will take much longer to wear them down. My fish fighting mentality is to wear them down mentally just as much as physically. The bigger the hook you've got in the fishes mouth, the more "down and dirty" you can get.

4. Keep your tension- This may be a no brainer but it is a mistake I see made over and over. Big fish will give you some of the wildest and most rewarding fights of your life, but no two are the same. You have to be prepared for anything. One minute the fish may be charging downstream, only to make a 180 degree turn and fire back upstream. Othertimes, they may bulldog around in front of you for a bit and never make a big run until you have your net ready to land them. I could continue on with these scenarios but the point is, be prepared for anything and keep proper tension on the fish throughout the entire fight. Perhaps the biggest way I see anglers fail to do this is with a fish that makes an immediate run downstream after being hooked. The angler will begin the chase downstream and either a) not be prepared for a direction change the fish may make or b) actually chase too fast and create slack when the fish slows up without warning. Tension can also go the other way during the fight. If a fish comes up to the surface and begins violently shaking its head or rolling/flopping agressively, back off with the pressure slightly. Now, I'm not talking to the point of "bowing to the king" like when your tarpon fishing (i.e. when a tarpon goes airborn you physically bend over to give the fish some slack in the line to jump with) but slightly relaxing the pressure can really help keep a small hook in place during these intense, and often short lived moments.

5. Have your drag set properly- This somewhat ties into the last comment of being both a no brainer and maintaining tension, but is something I check constantly throughout the day. It doesn't take much for your drag knob to get bumped when your scrambling through willows, trees, laying it down to handle fish, etc. Even a slight bump to the knob may take a pound or so of pressure off your drag that could easly go unnoticed while your stripping out line to make casts, etc. Taking 5 seconds periodically throughtout the day to make sure your drag is exactly how you want it can pay dividends.

6. Plan your landing- I'm really big on this. In fact, I'm huge on this. As soon as a big fish (or even a decent fish for that matter) is hooked, immediately- or as immediately as possible- figure out your ideal place to land the fish. This will often be an eddy, shallow shelf, or softer pool close to the bank. Landing a big fish can be tough, and landing it in rough, fast water can be even tougher. By identifying the softest water available, you will have much more of a purpose to your fight. Every move you make should be geared towards getting the fish into that predetermined "safe" landing zone. There will be times, I can assure you, that this zone may be 20-30 yards downstream. There's nothing wrong with this. Having a good, soft water zone to finish the battle in will help immensely. Aside from the fact that getting the fish out of heavy current will be helpful, it will also give you a solid spot to stand during those last crucial moments. 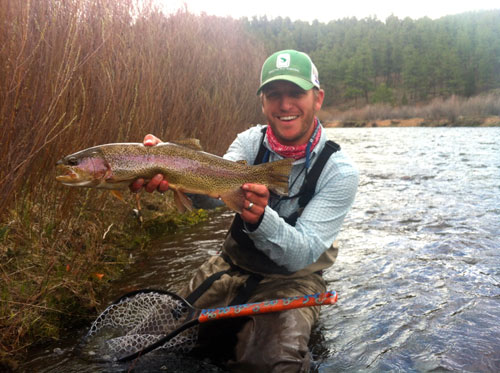 7. Net the head- This can be very important especially when netting a big fish alone, where there's almost always a guarantee it will be making some last minute attempts at escape. Once a fish is within landing distance, trying to scoop it up by the tail makes for an all too easy opportunity to turn on the afterburners and head back towards deeper water. Getting the fish head first in the net makes it much tougher for a quick turnaround and another run.

8. Don't rush the final moments- I can't stress this enough. Just because the fish may be close enough to land and showing signs of tiring, always be prepared for another big run. Avoid doing the full fisted clamp down of your fly line against the cork. I've seen countless big fish lost right at the net because the angler got too excited and let their guard down for a split second when the fish decided to make a final run. Don't get impatient or assume the fight is over just because the fish is in close. Until that fish in the net, you should always be prepared for another run.

Catching big fish is something we all hope to do countless times over. The good news for us living in Colorado is that we have the chance to do this nearly everytime we step foot into the river. With a little preparation, seeing a big fish on the line should bring you nothing but confidence that you will be able to land it!