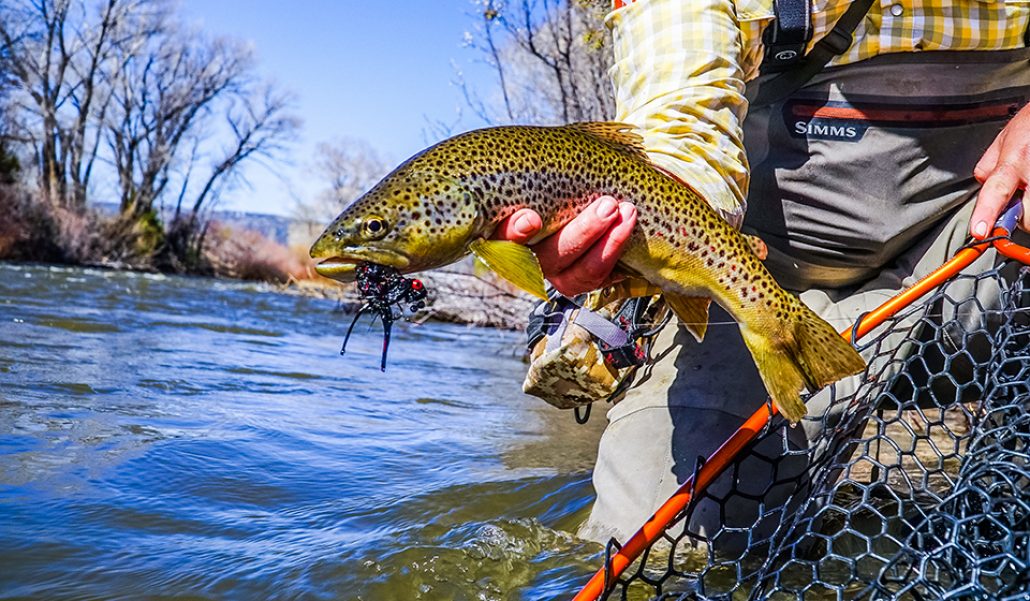 Runoff is beginning to show itself around the state and high muddy water is something we are all going to have to deal with for the next few months. It is easy to feel lost and intimidated when fishing high water and for that reason many anglers shy away from fishing during runoff. However, if you are willing to work a little bit, fishing that muddy water can be some of the most productive fishing of the year. Here are a few tips that will help you fish during the runoff season

Being confident when approaching water is a factor not many people talk about, but really plays a huge role in your success, especially when you are fishing out of your comfort zone. It’s simple if you don’t believe you are going to catch fish, chances are you won’t. You will be quicker to give up, continually question if the bugs you are using will work, accept that it just wasn’t meant to be and head home. Trust me, fishing water that looks like chocolate milk intimidates everyone, it is easy to feel lost and not have any idea where to even begin. The most effective way to combat those issues are by being prepared. Have plenty of flies that make sense (think big), start in spots you have had success at when it’s not runoff, and most importantly believe you will have success. Remember most of our rivers in Colorado are home to THOUSANDS of fish per mile and trust me, they don’t just stop eating for the 2-3 month period during runoff.

This is another huge factor when fishing during runoff. When you pull up to, let's say, the Colorado River and it’s a massive raging mess, you are immediately going to think “Holy S***” Tanner had no idea what he was talking about. When fishing high water, you have to face it, there is going to be tons of water that is unfishable for the simple reason that you won’t be able to get to it. Therefore, you are almost forced to “make it simple.” You should live along the bank hardly ever casting more than 5-10 feet out from the bank. The fish want a break from the high water more than anybody and for that reason they will be pushed to the edges looking for big easy meals that will be getting knocked loose in the big water. So again don’t over think it; the river during runoff forces you to keep it simple so fish it that way.

When fishing during runoff, leave the 5x or even the 4x tippet and anything smaller than a size 14 at home. I’d say leave anything smaller than size 12 at home but, by now I know quite a few of you and I know the crazy looks you all give me when I say try that size 8 Pat’s Rubber Leg. However, I am dead serious, this last week flows on the river I was heading to went up from 250 CFS Thursday to 700 CFS by Monday when I got there. When I wasn’t fishing streamers, my rig was literally 3 different colored Pat’s Rubber Legs. Bug selection goes hand and hand with keeping it simple. Fish the big stuff, fish aren’t eagerly going to expend energy moving to a size 22 midge pattern because it is was too much work and honestly with the low visibility won’t be able to see it even if they wanted to. Lace up a combination of your favorite stonefly and crane fly patterns with enough weight on some 2x or 3x tippet and get after it. Streamers are another great way to fish during runoff. This time of the year I fish predominantly big black and yellow streamers that will grab the trout's attention.