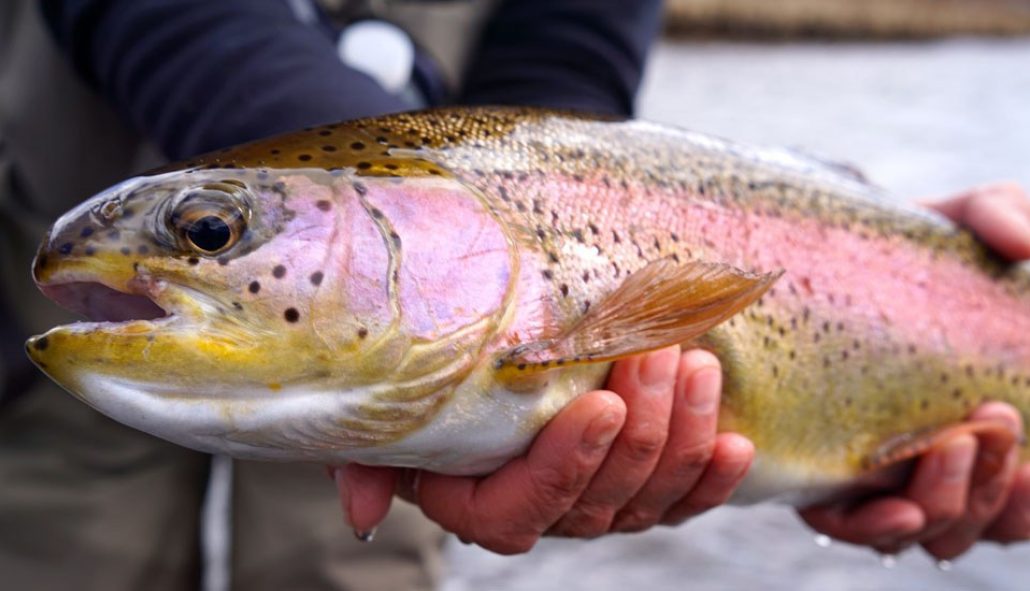 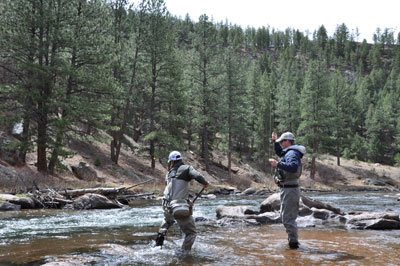 As I sit here writing this, wearing shorts and flip flops, I can see that both weather.com and Weather Underground tell me in just two days we’ll most likely be looking at snow again. This will then be followed up by another warming trend that will most likely have the flip flops back on by next week. This could also be summed up by saying “Welcome to Spring in the Rockies”. As is seeming to become a trend, it seems like just yesterday I was sitting down to write ‘Fly Fishing In March’. It’s been a busy past month around the shop. The favorable weather that accompanied the 3rd month of the year had a lot of people on the water and for good reason- the fishing has been REALLY good. The guide season has definitely kicked off and we've had multiple trips out the door every week. April is proving to follow this trend and I expect the next 4 weeks will provide some of the best fishing we’ve seen since fall. As could be expected, the majority of my time lately has been spent up and down the South Platte and I can say with certainty- the fish are SOOO happy Spring has arrived. For the first time in many months, I’m actually seeing fish do more than just sit tight to the bottom, opening and closing their mouths eating whatever drifts by within a couple inches of their face. They’re really starting to spread out and roam the riffles, shallower flats and buckets and in general, just get in a much better mood. The Baetis are starting to show up with more regularity and the fish are taking note of this as well. If you happen to be on the river and see some little mayflies buzzing around A) make sure you’ve got a Baetis nymph tied on (a jujubaetis is my go-to) and B) keep an eye out for noses breaking the surface. A recent guide trip last week was what I consider to be a textbook example of how this month will go. There wasn’t much bug activity in the morning and most of our fish came on little midge patterns. Then, from mid-morning through mid-afternoon there was a sparse, but steady enough to get the fishes attention, Baetis hatch. The fish got super keyed into this emergence and we saw multiple trout actively hunting these little guys as they left the safety of the river bottom in their quest to turn into adults, mate and then head to the big river in the sky. Around 4:00pm the hatch had pretty much wound down and the fishing slowed noticeably. On the contrary, Dave from the shop was fishing this past Sunday and got into an afternoon Baetis hatch that lasted until after 6pm and had good fishing much later than we had experienced just a few days prior. In general, I’d say the biggest key to success this month will be paying attention to what you’re seeing from a hatch perspective and react accordingly. The trout will be seeing considerably more bug activity than the past 3 months have provided and will be feeding most actively during these hatches. Otherwise, nymphing with an egg pattern/san juan worm followed by a midge pattern or two should produce from sun-up to sun-down on most days- particularly if you’re not seeing much going on from a bug life standpoint. The Rainbow trout are still doing their spawning thing so please be mindful when wading and always take a minute to look around your immediate area before stepping into the river. If you happened to miss it, we recently put up a great article on trout spawning that is definitely worth the read.

From a shop perspective, barring any freak winter storms that might decide to (but hopefully won’t) show up, things will most likely be humming along quite nicely here. We’ve got a handful of events on the books including an in-store presentation from TenkaraUSA founder Daniel Galhardo on the 9th, a couple spots still remain for our “Learn The Basics” class on the 15th, our first Casting and Cocktails sponsored by R.L. Winston Rod Co. is on the 16th. Additionally, Tucker and I are taking a 10-day road trip through Montana which includes a hosted trip to the Bighorn River, a stop by the Simms headquarters in Bozeman, and wraps up in Missoula for the Orvis Guide Rendezvous….all while still finding some time to get a bunch of Guide Trips out the door. Yes, it’s certainly looking like April is going to be another busy month here at Trouts Fly Fishing- and you know what, we wouldn’t have it any other way.