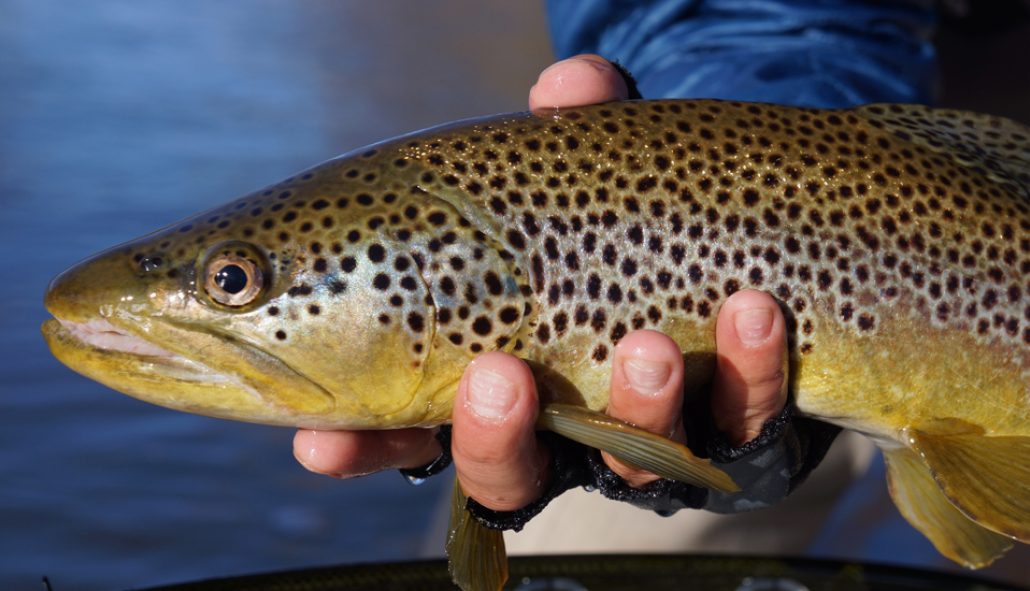 While it’s hard to believe we’re staring down a new season already, my confidence is strong that I don’t stand alone welcoming Fall with an ear-to-ear grin. While I realize this means the days that require the hopper boxes are waning, the fact that there is even more reason to remember the streamer boxes more than makes up for it. On a guide trip yesterday we got a few big fish to eat the streamer and man did it feel good to have a big hook in a big fish on big tippet. I’m not going to lie, seeing a customer with a 20” fish held on by a size 18 beadhead and 5x isn’t always the best thing for my blood pressure. But enough of that for now.

So here we are. October. And like I said last year during this monthly rant…it just feels good to say. It also just feels good to feel. These cool mornings (or cold, it was 29 degrees as I rolled through Fairplay the other morning on the way to the Dream Stream) have the fish on the move and feeling good. I’ve said it a handful of times in some recent rambles that we’re staring down the best fishing conditions we’ve seen in months and all of my recent trips to the river have only further solidified this sentiment. While the high flows we cursed for the majority of the summer may have gotten old to a few of us, it did phenomenal things for the health and condition of our finned friends. It would be interesting to know during the course of a normal water year, the average number of times a fish in a stretch of river gets caught. By the nature of it all, I’m sure some go the majority of the season hook-free, while some of the others utter the phrase, “ah dammit not again” multiple times a month (if not a week). And while this average number is something we’ll never know, I would place a bet on it that the average was down this year. All that water gave them a lot of places to hide from the gore-tex army and live out the warmer months in relative peace.

But guess what….that game is long over at this point. All of our home waters around here are in prime condition and the fish have the least amount of real estate to practice angler avoidance we’ve seen in 6 months. It’s really the perfect scenario if you think about it. Fish have become easier to find and their appetites are on the rise with the changing of the season. Game on.

Speaking of the changing of the season, it’s impossible to talk about Fall fishing and not mention Brown Trout. I realize not a fly-angler exists that doesn’t know it’s spawning season for these guys, but that still seems to be forgotten from time to way-too-many time out on the rivers. I recently interviewed well-known Colorado fly fishing guide, Landon Mayer and one of the topics we touched on was this very subject. If you missed the interview, click HERE to get caught up to speed. He makes several very simple suggestions to follow that will no doubt lead to more fish for all of us in the future. I won’t go into any further at this point. Just read the interview.

Let’s move on to the fishing though for now. With the changing of the season comes the changing of what you should be tying onto the end of your tippet. On all my recent trips it’s become increasingly clear that the fish are really getting keyed back into the midge, and particularly Baetis game. Additionally, the San Juan Worm that usually hold the pole position on my nymph rigs has become replaced by an egg pattern with more regularity. (hint hint: because the fish have been hammering eggs lately!) Lastly, as I mentioned in the first paragraph, don’t leave home without your streamer boxes. While I’ve certainly had some very productive days throwing the big stuff under blue bird skies, it’s the nastier/colder/cloudier days that I’m keeping my fingers crossed for right now. That might be the epitome of Fall fishing for me if I really think about it. Those first real days where not bundling up truly isn’t an option and you find yourself thinking for the first time in a long while, “You know I wouldn’t mind if it warmed up a bit”. I’m sure a few of you can relate.

Long story short, it’s going to be an incredibly fun month to be on the water and I hope you all get the chance to enjoy at least few days with a bent fly rod in hand. Thanks again for keeping an eye on this blog and as always, let us know how we can make your time on the water more enjoyable and productive. Have fun out there.