The Colorado River was flowing clear – clear enough to easily follow a streamer as it was retrieved from the bank towards our boat as we floated lazily between the massive red sandstone walls. Sometimes the strips were short and fast, other times slow and deliberate. And when a fish followed from a deeper hole or recess in the river, we could watch that as well.

The only problem was – the fish wouldn’t commit. They’d poke and punk at the smaller streamers we were casting but we could not get a solid take and set. After a few missed fish I changed up flies – moving from a lighter colored Belly Dancer to a smaller green crystal bugger. My thinking – maybe my fly was too big.

This didn’t fix the problem. These fish just were not connecting and eating the fly.

“Maybe it’s just early in the season and their fish killing and accuracy skills aren’t honed yet,” joked my buddy Mike who was on the oars. 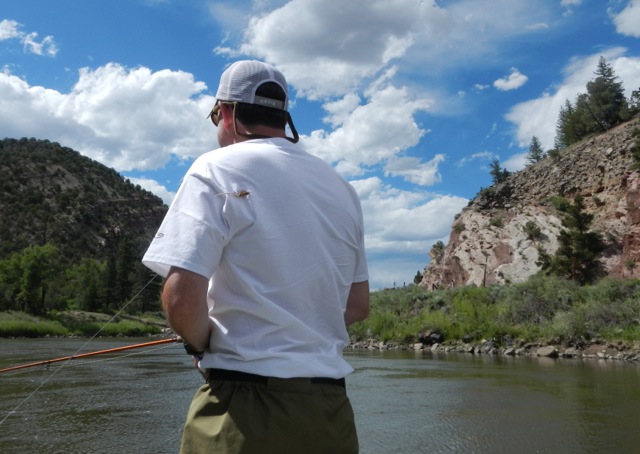 Another good reminder why you should always crimp your barbs

I switched up my rigging again, this time throwing a double streamer set up – larger fly in the front with a smaller streamer as a trailer fly. We continued to move fish from the banks – some would swim along with the two intruders, giving them a thorough inspection. It was fun to watch all of the activity from the deck but it was getting a bit frustrating.

So, I did what I often do at times when gill-bearing aquatic animals with small brains are outsmarting me – I cracked a beer and opened my fly box… again.

The Colorado River is the principal river in the Southwest United States – making its way from the peaks of Rocky Mountain National Park all the way into Mexico.

It is also one of Colorado’s most popular rivers from an outdoor recreation standpoint. This includes both angling and other river sports like commercial white water rafting, kayaking, camping, picnicking, and just about every other river recreation you can think of.

From a fly fishing perspective, the Colorado can basically be broken into three fairly distinct sections. The Upper Colorado begins high in Rocky Mountain Park before flowing out through the reservoir system in Grand County (Grand Lake, Shadow Mountain Reservoir and Lake Granby). From there it moves through Windy Gap Reservoir and past the towns of Hot Sulpher Springs, Parshall and Kremmling. This upper sections offers some great walk/wading and easy access options.

From there, the river plunges through Gore Canyon after taking in the Blue River near Kremmling. Access to Gore Canyon is extremely tough and there isn’t much fishing to speak of due to the drastic drop in elevation. From there, the river changes from a walk/wade fishery to one with great options to float a raft or drift boat. From the Pumphouse put-in all the way through the Dotsero there are a number of great float trips at varied degrees of difficulty from a rowing perspective. In addition to easy to find put-ins and take-outs on public land, there is also great access for wade fishing throughout this middle section of the Colorado River.

Most anglers consider the Lower Section of the Colorado to run from Dotsero and the confluence with the Eagle River all the way through to about New Castle and beyond. This stretch is roughly 30 miles of river bank and also offers many wading and floating options with significant stretches of public access.

Each section of the Colorado has a unique feel and the sections fish quite differently at different times of the year. Flows can be fairly dynamic on the Colorado depending on run off. In 2011, peak flows reached nearly 10,000 CFS. This year, flows peaked in mid May under 2000 CFS. When we floated the river at the end of June, flows were right around 500 CFS at the Kremmling gauge, and the water was skinny even for our two man cataraft which is fairly low profile.

Back on the water, I perused my streamer box. At last, I did what I typically do when I’m faced with the situation I was in. I grabbed the biggest, baddest, meanest looking fly in my box: the Boogeyman. 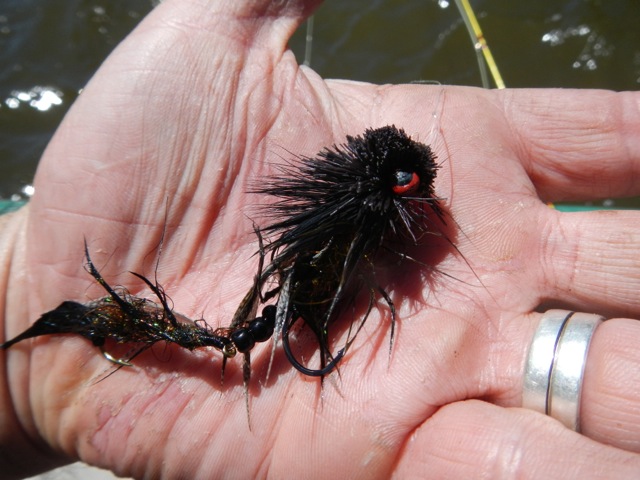 This specific fly had been hand tied by our in-house fly tying instructor David Luna. The Boogeyman is an articulated fly and is extremely “swimmy” – it looks like a wounded rainbow in the water. It is a really fun fly to fish, especially from the boat because you can manipulate its’ movement in the water and it is highly visible. Having a streamer that you can see helps because it also makes you focus your vision on a fairly small piece of water which then makes it easier to see fish move at your fly.

Which… in the case of the Boogeyman they did.

They just didn’t nip at the fly, they tried to murder it. Gone were the nudges, prods and pokes. The Boogeyman immediately triggered massive takes. We also noticed a change in the size of the fish that we were moving. Instead of the smaller cookie cutter brown trout that we were watching earlier, we were now seeing bigger browns and the occasional hard charging rainbow (the less densely populated species on the section we were fishing). 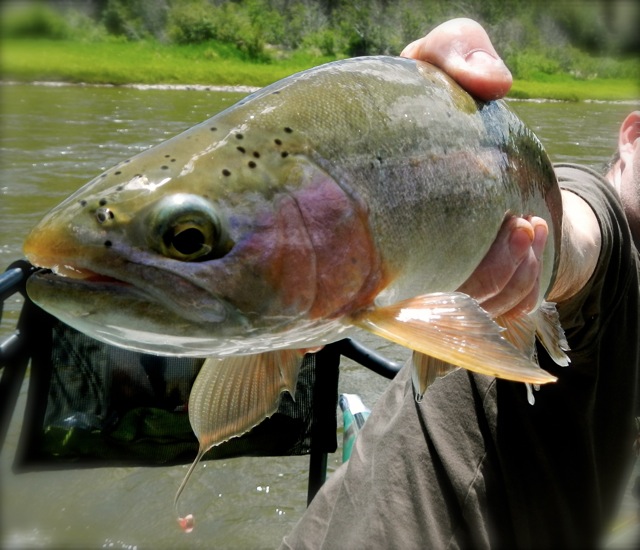 Over two days on the Colorado, this chunky rainbow put on the biggest show

At one point a big brown came off the bank and swam directly next to the Boogeyman as I made long slow strips back to the boat. He followed… and followed… and followed….but didn’t take it. My buddy Mike slowed the boat in effort to give me another shot. I put out another big cast, gave the fly a second to sink and began stripping. The big brown immediately showed itself again – this time, after the second strip it ate the fly, paused for a split second and turned to head back to the depths. I set the hook and the fish exploded on the top of the water before making a big run. Mike and I had watched the entire drama play out. 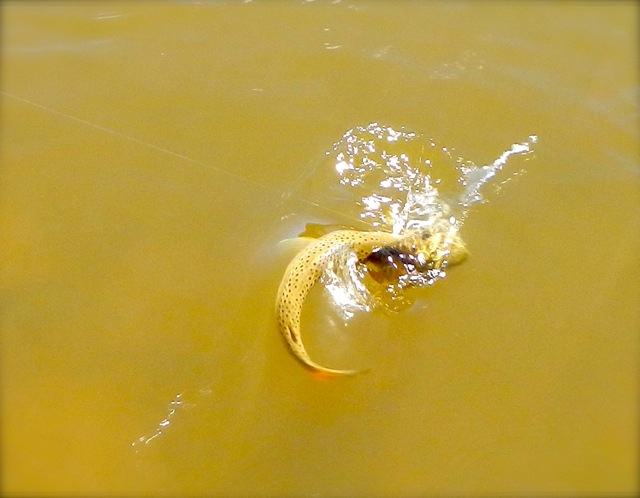 “I think the first time it was thinking about whether or not it wanted to mate with it,” said Mike. “Then the second time around, it decided to kill it instead.” 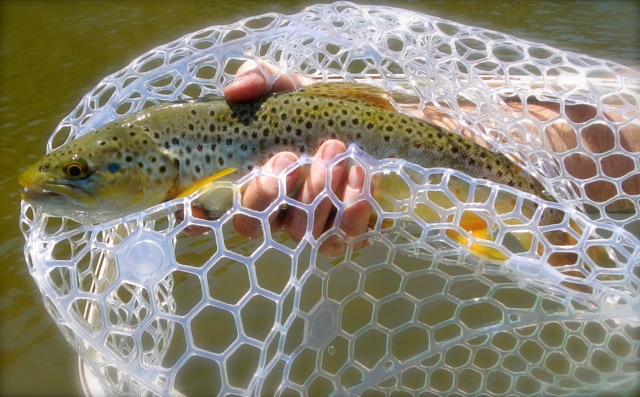 We both had a good laugh. You have to love streamer fishing on the Colorado River. 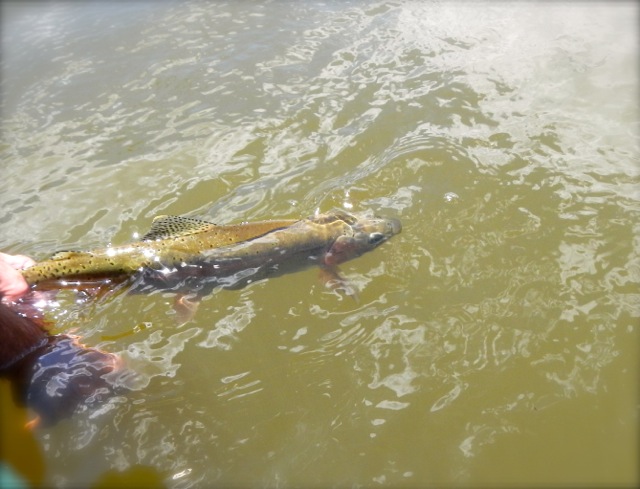 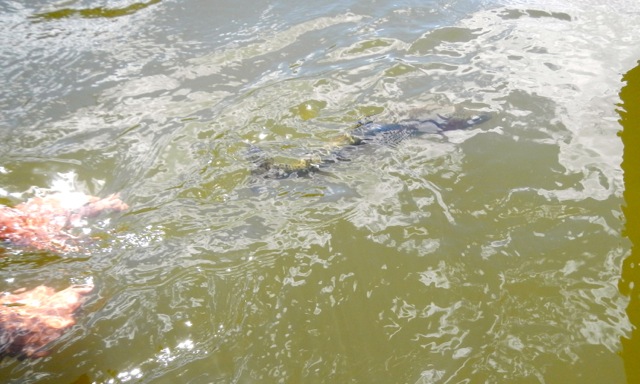 If you have any questions about fishing the Colorado River, check out our Stream Flows and Fishing Reports pages. Or, stop in the shop or give us a call at 303.733.1434.