I always tell people: to be a successful carp angler on the South Platte, it often means stacking the cards in your favor. Knowing where fish reside, knowing how fish change behavior with different flows and weather temperatures, knowing where NOT to fish… are all factors that can help the cause.

With this year’s Carp Slam event just about a month away, I need all the help I can get. That means getting out on the water.

This past weekend I had a chance for a solo trip to the Denver South Platte and I took it. I knew that the conditions were not ideal. For starters, the night prior to my outing we had tornado warnings for the Mile High City and a massive storm rained enough to flood the streets, dropped tennis ball size hail in some areas of the front range, and spiked the Denver South Platte past 3000 cfs.

Who likes sight fishing in chocolate milk? I don’t.

Always being an optimist, I decided to check a section of river where I’ve had luck after a big spike in the past. Even when most of the deeper areas of water are completely opaque, when an eight pound carp decides to opportunistically forage in 4” to 6” of water, clarity doesn’t really matter that much. You can see the fish in skinny water. What's on the menu?

In the course of ~4 hours I had three great opportunities to hook and land fish… and I blew all three.

Fish #1 – the first real “player” I came across was moving from a deeper section of water up onto a very sandy shelf flat. The fish was coming in my direction, had his head down and was obviously on the feed, rooting around with his head in the sand. I put a ~25 foot cast off to his right. The fish didn’t spook and I swung the fly four feet in front of him and let it sit. Once the fish closed the gap I stripped the crawfish imitation in short bursts. The carp moved on the fly like a fired-up redfish. I felt him eat the fly and I strip set the hook. Whether he spit it or I pulled it out of the fish’s mouth… who knows? The fish turned 180 degrees and disappeared back into the deeper water.

Fish #2 – I found my second really great opportunity downstream from the first. This fish had its back sitting out of the water a good 2” and was stirring up quite a bit of mud. I switched flies to a much smaller, lighter leech pattern – no chain, no beads, no weight. I got down low and closed the gap on foot. Before I cast the fly I dropped it into the river and crushed it into the sand with my boot. This fish was not really moving and was in a part of the river where there was not much flow. I put my first cast off to the right and quickly realized there was no chance that the fish would see my fly. My second was just behind the fish – and it did not like being “lined.” It was a short yet terrible cast. The fish blew out like a shot. 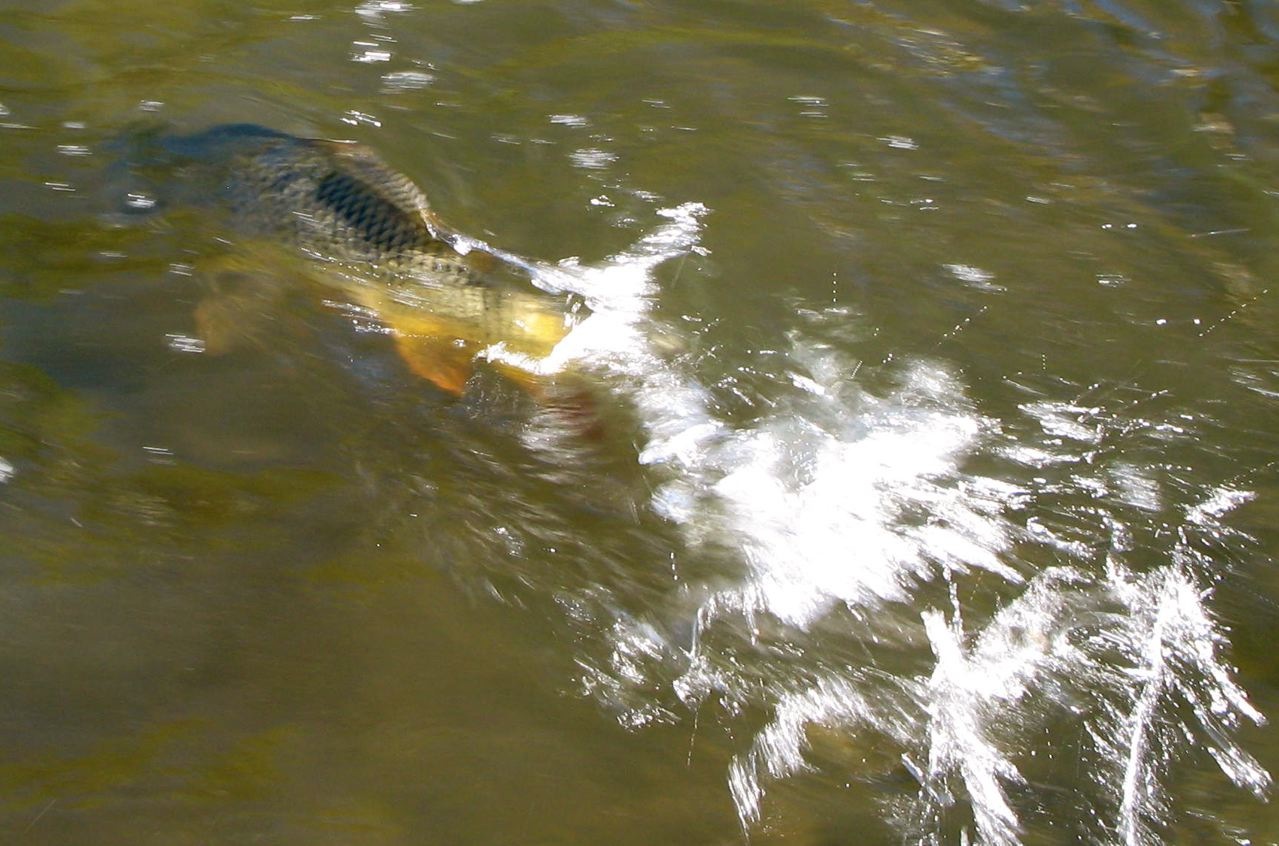 With a more accurate presentation, I’m fairly certain I could have had this fish eat.

Fish #3 – My third and final miss happened about 30 seconds after fish #2. Before I had a chance to kick myself in the aXX for a bad cast, I spotted another carp moving up onto a sandy flat. It was similar to fish #1 but this was a ~60 foot shot. The fish was moving from a deeper, dark channel to a very shallow light colored area of the river where I could see him well. I made the cast off to the right of the fish and then let my fly swing into position. I couldn’t see the leech pattern but I could make a good estimate of its location based on my fly line’s location. Once the fly was in proximity of the fish, I made one long slooooow strip. About three quarters through the strip I felt the fish… my line went tight, bounced off the water and the carp gave a massive head shake. The surface exploded and for the briefest second I was connected. 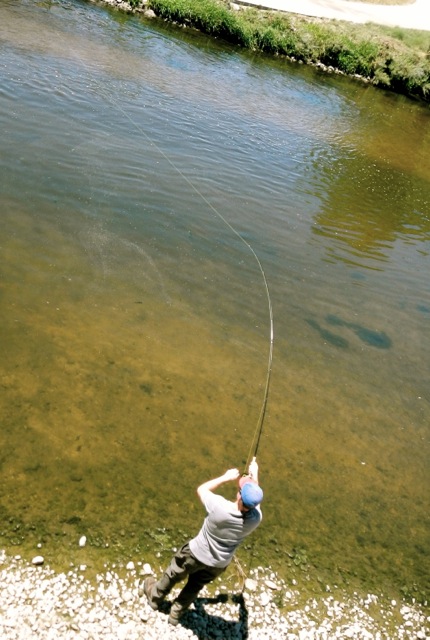 Most of the carp I hook are less than 20 ft from my rod tip so making a long shot like this felt really, really good.

Then… the small fly popped and my fly line came firing back at me – collapsing in a downtrodden heap at my feet. This… felt really, really bad.

I decided that this section of water that just produced three legitimate opportunities needed a break. I pulled up stakes and marched to another similar piece of river but didn’t see any fish – just a lot more chocolate milk.

I’ve had quite a few days fly fishing for carp end up in a similar fashion. Am I getting worse at carp fishing? Not spending enough time on the DSP? Are these fish getting smarter? Spookier? Warier of flies and fly anglers? Who knows. 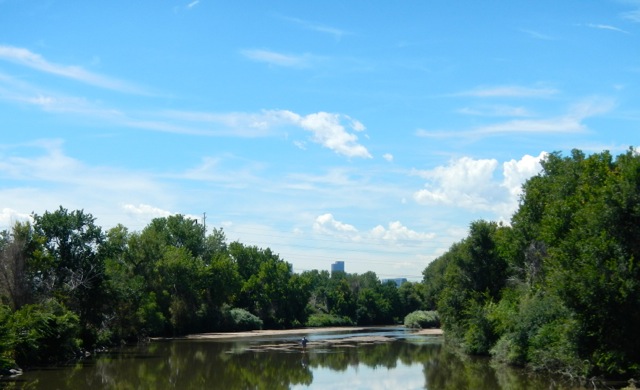 A lot of people ask me why I’m so fascinated with carp fishing and the Denver South Platte. I think these three interactions personify why carp and the DSP can become an obsession for some fly anglers: carp are a challenging, big fish in variable, shallow water conditions – presenting sight fishing options close to home.

Carp fishing on the DSP has never been easy – but it’s always a lot of fun.

The river always has an interesting story to tell and I’m sure this will prove true once again at this year’s annual carp slam event. CLICK HERE to see how you can support this year's Slam.