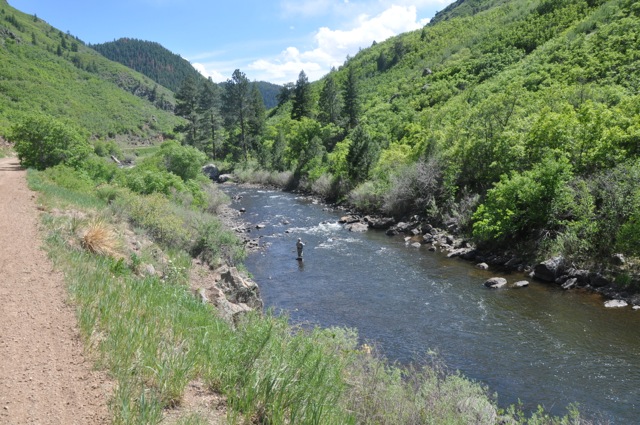 I have a love/hate relationship with fishing in canyons. I hate ‘em because I constantly find myself hung up in overhanging branches, slipping on scree, and twisting my ankle between boulders. I love ‘em because I get to scramble around on large rocks and crevices like an eight year old, I can always find areas to fish where most other people won’t go, and I love fishing small zones of technical pocket water.

I love and hate canyons because they are challenging.

The first fish I hooked after a six mile bike ride up Waterton Canyon was a 13” or 14” rainbow that ate a red tungsten rojo midge. The fish took the fly in a small section of slower moving water right in front of a two foot waterfall. It first came toward me and then turned downstream just as quickly. I knew that if the fish went into the faster water and over the small falls it was game over – there would be no chase due to the large and loose rocks that surrounded me. I held the fish as best I could – it finally came up with a big head shake and spit my hook.

The experience was quick and jolting and the first thought that came to my mind was: ‘well, at least there are still fish up here.’

Waterton Canyon is one of the lesser known and frequented stretches of the South Platte River Drainage. It is a tailwater and dam controlled much like its sister sections – Deckers, Cheesman Canyon, and 11 Mile Canyon. It is also one of the closest stretches of river that holds brown and rainbow trout located just 25 miles from Downtown Denver.

Waterton Canyon itself runs roughly six and one-half miles from the parking area to the Strontia Springs Dam. Fishing in the lower section of the river is open to all anglers and gear. The upper half of the river, above the Marstom Dam is restricted to flies and lures only. 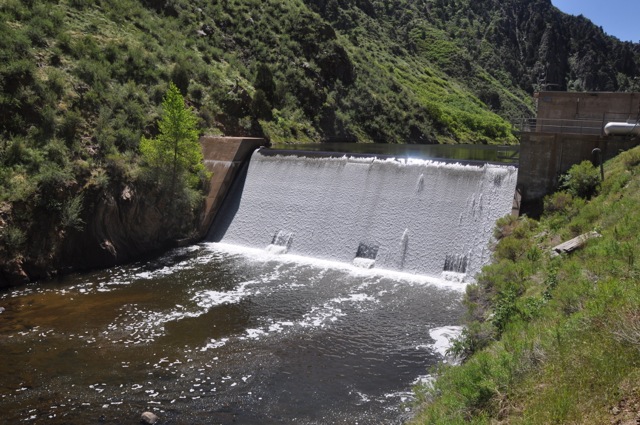 Above Marston Dam is fly and lure only fishing.

One nice thing about this section of river: it is inaccessible by motor vehicle. You can access Waterton by foot, or more efficiently by bicycle. The road itself is a fairly well maintained dirt road. A geared mountain bike is probably the best option.

Make no mistake, if you head into the canyon get ready for some pretty spectacular scenery and some pretty challenging fishing. The day we fished Waterton in early June the stream flow was right around 70 CFS. The water was clear and the temperatures were in the high 80s. I was pretty bummed when I arrived in the parking lot and it was PACKED.

We set off on our bikes with our gear strapped onto our backs. With the water as low as it was I decided against wearing waders. I packed up my wading boots and wading socks, kept my fly rod in the tube, packed a single box of flies in a waist pack, made sure that I had a liter of water. Then we hit the trail. The ride up is a pretty moderate one – but when we arrived at the top of the canyon 40 minutes later my shirt was soaked. On the way we passed a ton of folks enjoying the outdoors – hiking, biking, picnicking, packing in backpacking gear – but very few anglers. I was pleasantly surprised to see fairly few people fishing and a lot of open areas of great looking water. 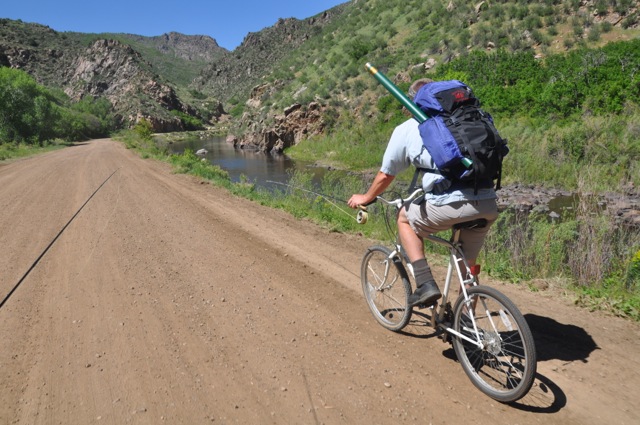 We spread ourselves out and went to work. I immediately went to a rig that I’ve found effective on many other areas of the South Platte – a San Juan Worm and small midge pattern. My buddies and I had agreed to try out as many different patterns as we could to see if we could crack the code – and find fish. I had not fished this section of water in five or six years and the reports I heard since then were always meager at best.

Right off the bat I noticed grasshoppers – both on the bank and drowned in the river. My one buddy had some luck with a Chernobyl and other foam patterns. It seemed that only the browns were going after the big bugs on the surface. If the grasshopper population continues to pick up into the summer this could be a great pattern to experiment with in Waterton in June and July. 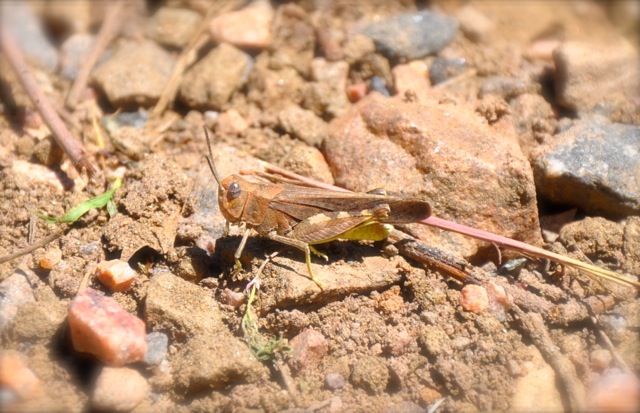 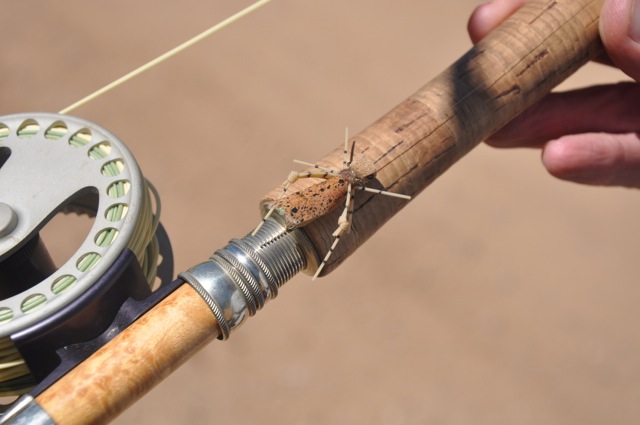 The other predominant bug that was hatching: caddis. There were quite a few bouncing around but the fish did not seem keyed in on them, at least not with any consistency on the surface. We saw a few random fish rising but nothing prolific or sustained.

The most effective pattern sub surface was the San Juan Worm - go figure.

I will say that although I’d rate the fishing a 5 on a scale of 1-10 the entire experience was a blast – especially understanding that this fishery is about a 30 minute drive from my front doorstep. With all of the rain and precipitation we’ve received this spring the Canyon was absolutely emerald. It almost glowed. At the top of the Canyon we saw a herd of big horn sheep and a ton of different bird species. For the short car ride and even shorter bike ride, it felt like I was miles and miles away from the big city.

One species I was happy not to run into that is resident in the Canyon: Mr. Rattlesnake. 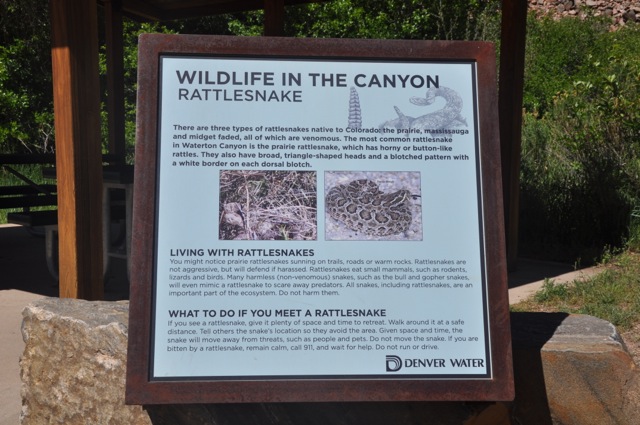 So what’s up with Waterton Canyon? The fish are there – but probably not in as great of numbers that some might remember from years past. The fish that we did hook were very healthy and proved challenging on a number of levels – the first challenge being just finding them. The fishing did seem better higher up in the canyon vs. the lower stretches (we fished the upper ~2 miles). There was a ton of great looking water that we hit lower down in the afternoon that just did not produce. I even tried throwing streamers to see if I could move fish out of some of the deeper holes - to no avail. 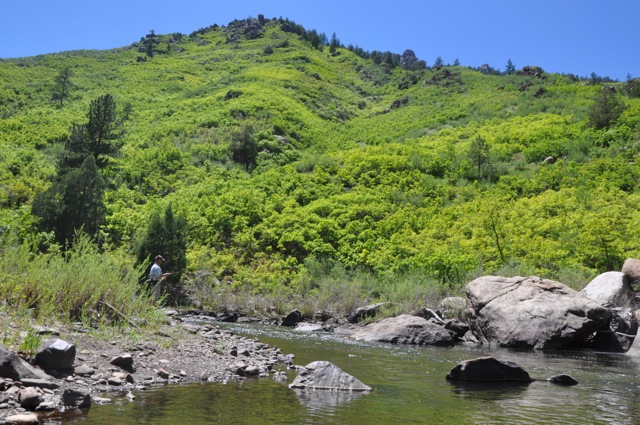 If you haven’t fished Waterton Canyon since it reopened and if you are looking for a close to home adventure, this is a pretty fun fishery. Adjust your expectations accordingly – and enjoy the ride and the scenery. Make no mistake, a trip up into this Canyon will have you working for fish – and hopefully loving it.

For more information, rules and regulations on Waterton Canyon from denverwater.org CLICK HERE. If you have any questions about taking your own adventure to this section of the South Platte and have questions stop in the shop or give us a call at 303.733.1434.