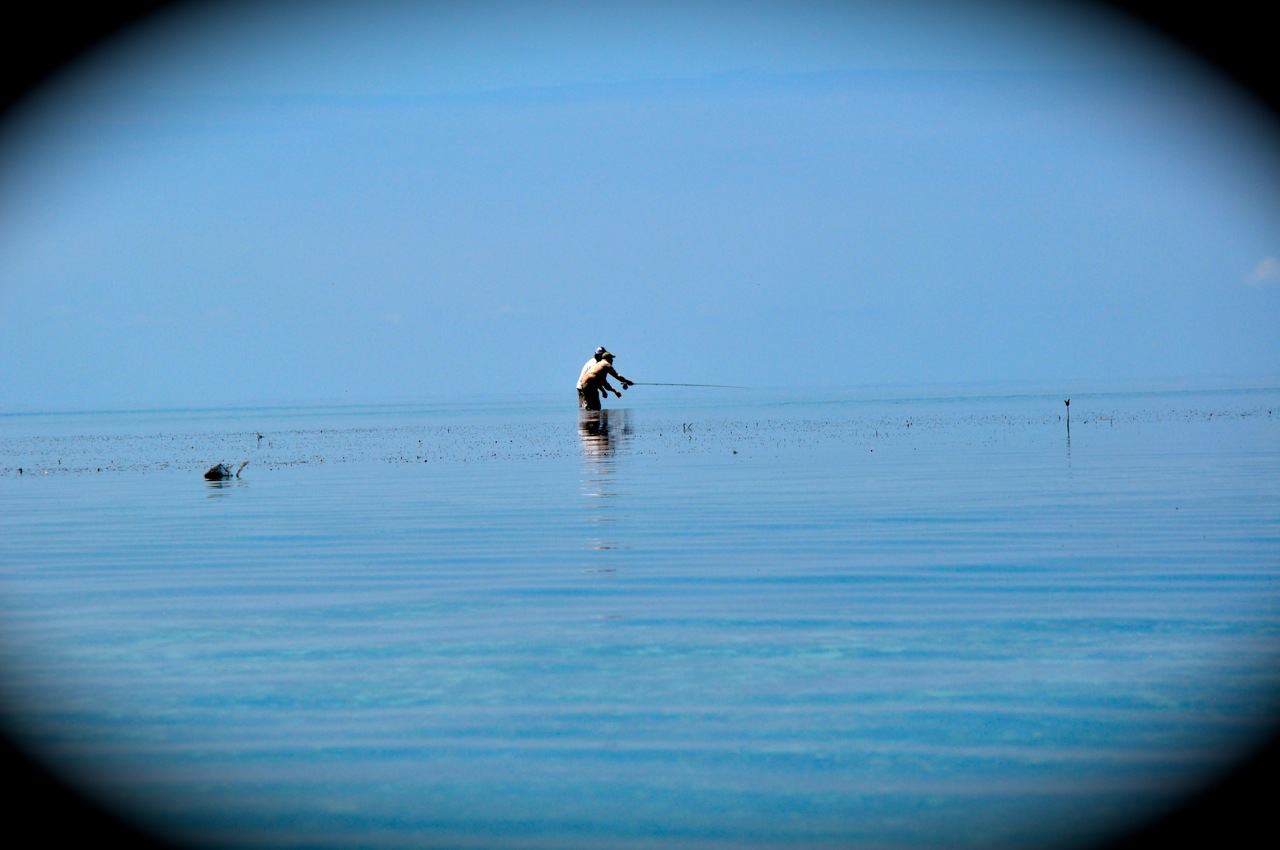 I could see the big tail standing straight up out of the water from almost a quarter mile away. The fish had to be huge.

“You see the fish now?” asked Julian Cabral, our guide and host at the Whipray Caye Lodge in Southern Belize.

“I can see it,” I said. I could feel my heart rate picking up already. I tried to take a deep breath.

“OK, we’re going to pole over there and then get out of the boat,” said Julian. He was cool as ice. I was not. I kept my vision locked on the tail and continued to take deep breaths.

“You know what you guys need?” asked Julian. “All you guys. You need to take some Valium. Relax man, keep your eye on the fish.”

I was not relaxed. It was our third morning hunting for permit around Whipray Caye. The fishing had been hard and the conditions variable. Our first day started around 6:00am. When I awoke I heard the tell tale sign of a rough day to come: rain pelting the tin roof of our island cabin. 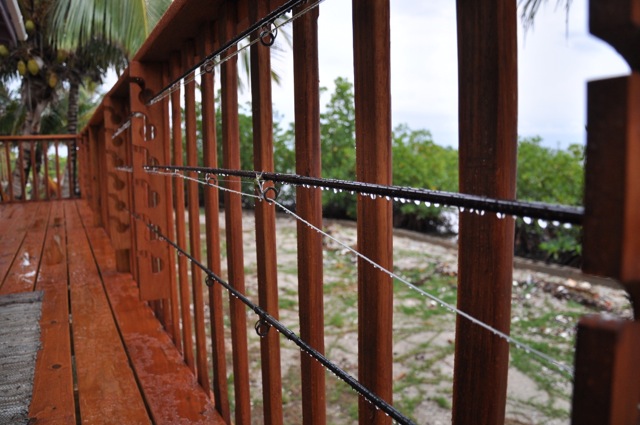 We spent the morning and early afternoon casting at rolling tarpon in a torrential downpour. Later in the day the weather cleared and a few guys on our group saw permit. We wrapped up our day around 6:00pm with skies starting to clear and high hopes for our three days to follow. 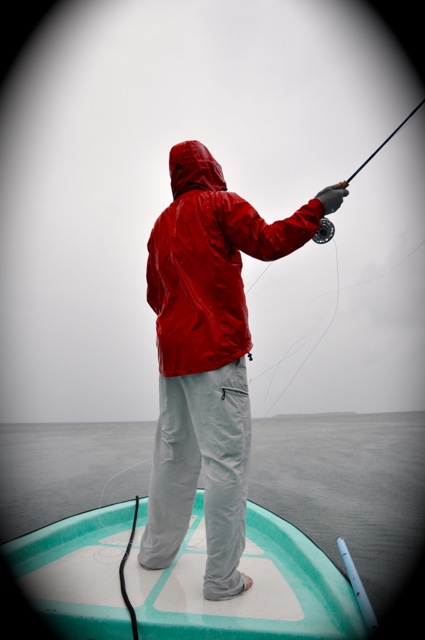 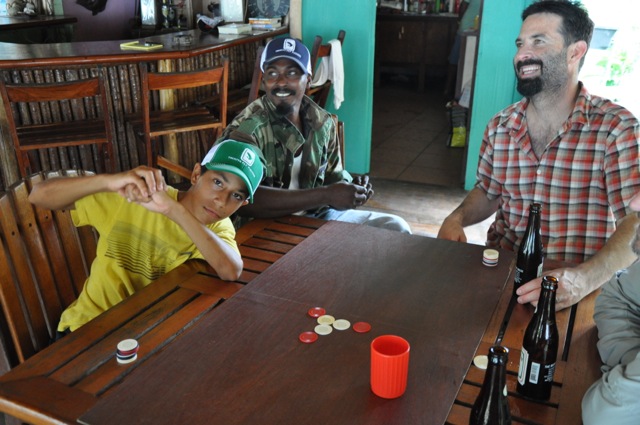 Day two started at 3:45am. We had coffee and breakfast and were skipping across the Carribean Ocean under the stars and a quarter moon by 4:15am. The plan was to fish for tarpon as they ambushed bait at sunrise. After that, we’d look for permit as the tide went out. We’d then continue to look for fish until the next tide at 2:00pm. Then, the plan was to wrap up fishing around 5:00pm.

We were on the permit program. 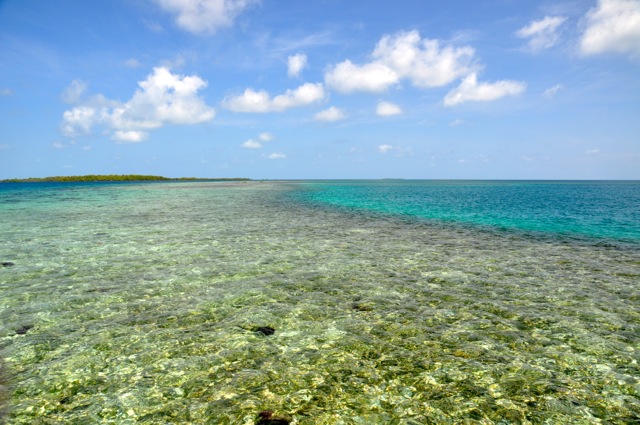 The flats that surround Whipray Caye to the north are expansive. We spent a lot of time poling and walking flats that ranged from two to three feet in depth. We carried 9 wt. rods with 16 lb. fluorocarbon leaders and tippet. For the most part, we threw small green crab imitations. One thing about the permit program became apparent pretty quickly: when the tide was high and the fish had enough water to move onto the flats, the fishing was explosive. When the tide was low and there was not enough water – you could hear the chirp of crickets.

Looking for fish during the slack tide

The only permit that came to hand over our four days happened on our second day. Phil and our guide Dermin picked up a small school of permit cruising in deeper water. Dermin called out the distance and trajectory, Phil made the cast, and one ate the Bauer Crab - the show was on. Then after that, Phil put another fish on the board. 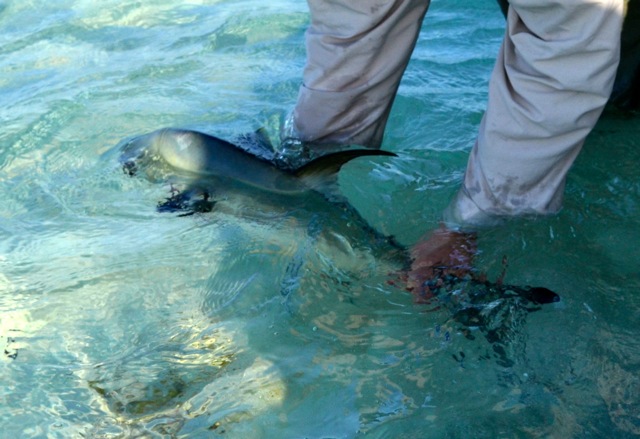 Day two and three provided our group with the most shots at fish. On day four, the tide never seemed to come in and we saw very few fish. Ian Davis from Yellow Dog Flyfishing Adventures summed up how our expectations should be set before we left for the trip.

“If you can get six or seven shots at tailing or cruising permit, that’s a good day. If you get one or two who follow your fly – that’s a great day,” Davis said. “Then, if you get one fish to eat during your trip – you did it. Mission accomplished.” 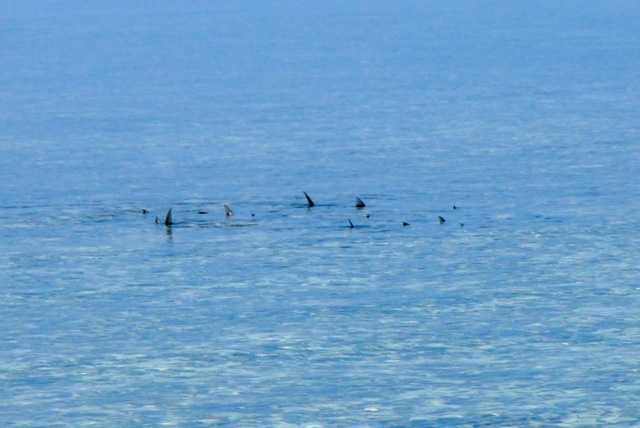 That was a pretty fair description of the permit program we experienced. But when the tide was right and the fish were in, the permit fishing was pretty amazing. I feel like we just scratched the surface and received a small glimpse of what fishing could be like in this area of the world when all the right conditions converge. In a single 90 minute window I had more solid shots at tailing permit then I’ve ever had in a single day. Ever.

Back on the flat with Julian we were still looking at that big tail as the permit worked its’ way on a deeper flat for crabs. I was literally melting the sunscreen off my face I was sweating so profusely. The fish was methodically bobbing in the calm water, every few seconds the giant black tail would disappear as he chased a crab out of the coral only to tip back up again as it went face down to gorge on other crustaceans.

Crabs are on the menu for a reason

We both slipped into the water and approached the fish. At sixty feet Julian stopped and eyed the big permit.

“Can you make this shot? Be honest,” he said.

As I launched my first cast I cringed – expecting the fish to explode and spook off the flat as soon as my fly and fly line hit the calm water two feet to the left of him. The fish held.

“Too far away. He’ll never see it,” said Julian, accurately critiquing my presentation. “Strip it in and put another one in there. Closer.”

I dropped another cast in.

At this point, I’m not sure I was actually breathing.

The fish slipped below the surface again. I made small strips waiting to connect – nothing. Julian and I sat in silence. I was fairly certain I spooked the fish.

After five seconds or so the giant tail popped up again, ten feet further away.

“Cast again, closer this time,” commanded Julian. “Put it right on him.”

On my third and final cast I put the fly between 12” and 18” off the fish and it blew up. The fish raced off the flat towards deeper water. I stood in a daze as the big wake moved away from us. I was expecting to get an earful from Julian but he was stoic about it.

“Well, that fish was either going to eat… or it wasn’t going to eat,” he said. “Let’s go back to the boat, there should be more permit right around this next corner.”

I stood there slack jawed. I didn’t know what to say or do. My shirt was absolutely soaked through. My hands and legs were shaking.

The permit program was taking its toll on me.

I’ve started to think of destination travel a bit like high stakes gambling. You do your best to learn about the game, you plan and prepare, you talk to experts, try your best to minimize variables and then you simply go for it. You take the shot. Fishing for permit at Whipray Caye might be a bit like rolling the dice. You might not always come out a winner, but with the overall experience you are never going to lose. And if you are lucky enough to get everything just right – welcome to permit city.