There is something to be said about starting out a new fishing season. Out with the old – in with the new. In my case, 2013 was a pretty terrible year for fly fishing for carp in the South Platte River. My biggest problem: I didn’t get out enough. A secondary issue, we had a lot of big and off color water last year that made sight fishing difficult. Thirdly - and this is just a working theory at this point - the fish in the Denver South Platte have become really spooky and skittish over the last few years.

Fast-forward to late January 2014 – the start of a brand new carp season. As I headed out with carp slayer and fellow Trouts employee Rick Mikesell and a client of ours - Kyle Wilkinson - we discussed what possible changes we would find on the river. As most folks who fish the DSP know, we had some massive water level spikes at the end of 2013. At some points, the CFS in the river hit over 5000+ (in some places river gauges were blown down the river and peak flows were never recorded). Our theory was that with flows that high, the river most likely has changed – significantly. With significant changes to the water direction, silt and sand deposits, depth etc., there was a good chance that the usual places where we would find fish… would no longer be holding fish. 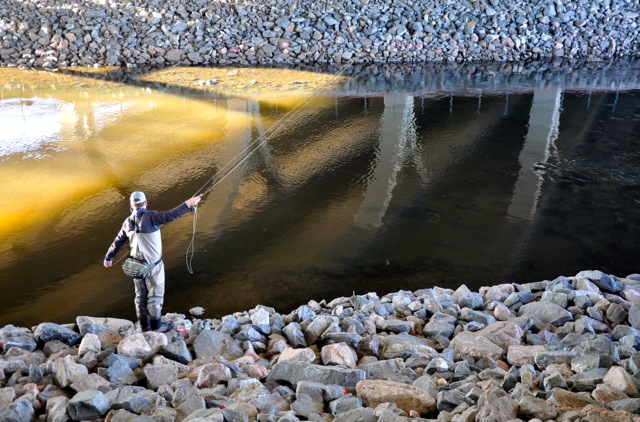 Looking for fish in all the right places

This presented a good and bad thing. The bad part, we would most likely spend more time looking for fish than in the past and less time casting. The upside: everyone else would be in the same boat – ultimately giving the common and mirror carp that reside in the DSP a much needed break. Relaxed carp – are happy carp. Happy carp eat flies – spooky carp who feel a lot of angling pressure… not so much.

On the day we set out our plan was to investigate two fairly different sections of river. The stream flow through Denver was right around 130 CFS. I decided to fish a #8 McTage McLuvin’ with a 3X Rio Fluoroflex Plus Tippet. 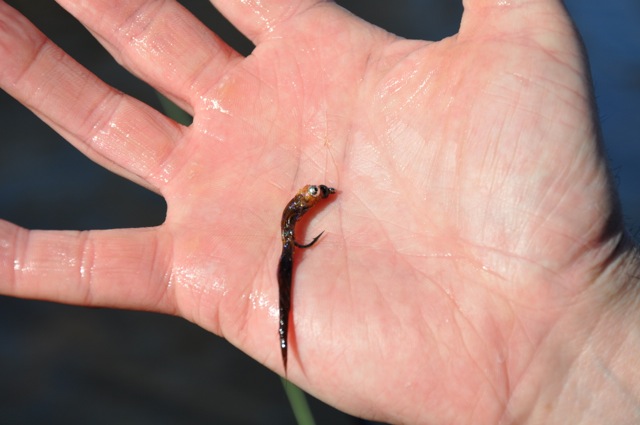 The first section we checked out was north of I-70 and South of Clear Creek. The water flow in this section was almost non existent do to water diversions and we quickly moved on. We continued north checking a few usual spots… nada. There was no one home. One section of river was almost unrecognizable. 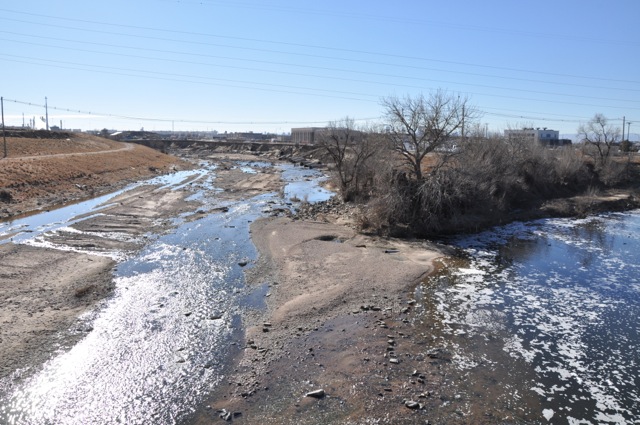 We continued further North and finally found a large pod of very large fish. We saw multiple fish that I would estimate broke the 20 lb class. We tried approaching them from a number of different angles and the outcome seemed to be the same – we were spooking fish. As often happens with carp fishing, once you spook one fish, the pack quickly becomes aware of your presence. After awhile, we decided to change strategy and back track up river.

After a short 15-minute drive we were at another well know carp hang out. 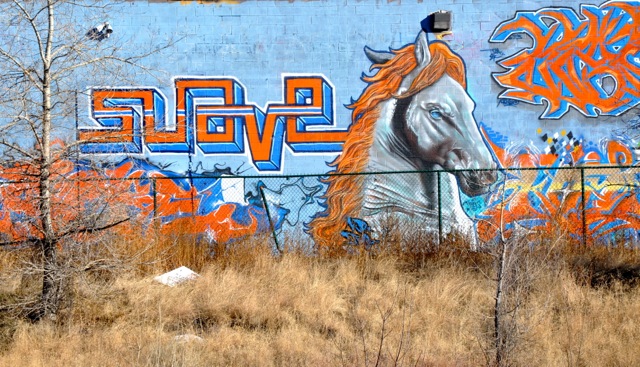 We looked for fish and things were eerily quiet. The first hint of discouragement started to set in. ‘Where the hell are all the fish’ I thought to myself – maybe out loud. Kyle and I scrambled across some riprap and got positioned on a short cement abutment and looked for fish downstream – hopefully on the move upstream. Most of the time, fishing for carp requires patience, which I normally lack. We just stood and waited… and watched. 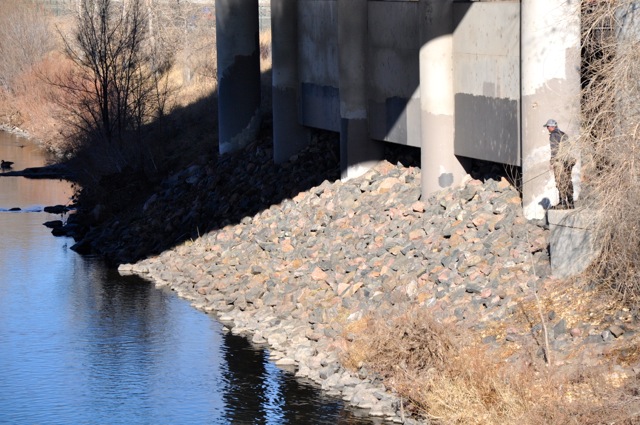 “Yup. Sometimes they move up this bank like it is a chow line,” I said. “One after another – shot after shot.”

“Huh,” said Kyle. He sounded skeptical. At this point, so was I.

After 5 minutes of staring into the water. Nothing.

Rick was across the river – standing – looking.

Then, I made out a slight variance in the water. Something caught my eye. I waited and focused. And then the carp appeared. It moved slowly up the bank. It was a solo fish but it looked happy. It was oblivious to our presence as it poked and probed at the rocks just under the water’s surface. 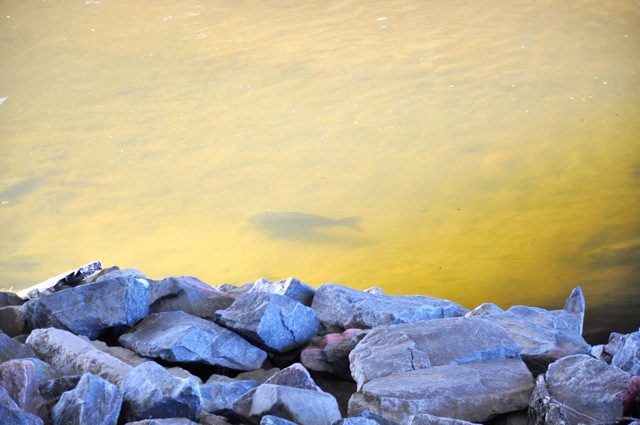 This is a fairly happy fish

It was a perfect shot, an ambush. Thirty foot cast – swing the fly – watch the fly – drop it right in front of the fish – wait for the fish to reach the fly – strip. Watch the fish eat. Textbook.

By this point, I knew I had run out of options. In a few seconds, the fish would be upstream from me making the presentation way harder – and the probability of me “lining the fish” much greater.

On my third shot everything worked. When I stripped my fly the carp was immediately on it. He hesitated and backed off briefly for one second and then just crushed my fly – literally burying his head down into the sandy river bottom.

I set the hook and for the next eight to ten seconds the fish just kind of bull dogged around in circles. It was almost lethargic. But I was not fooled. I had seen this winter behavior before. Rick came across the river, hoping for a quick netting job. As soon as the carp felt Rick’s presence it bolted. It went straight down stream. I tried to put on the brakes but I was determined to hold my ground. The last thing I wanted was to try to chase the fish across 50 yards of loose riprap and boulders. I was steadfast and adamant – I was going to fight this fish from where I stood come hell or high water.

Once 30 yards of backing disappeared out of my eyelet I decided to reassess my position. 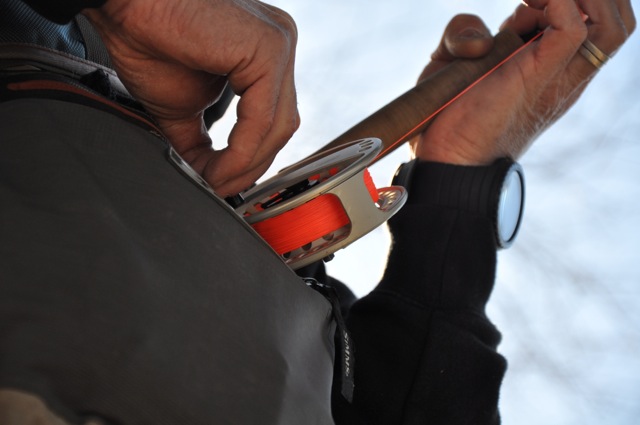 If I didn’t move – this fish was gone. I hop-scotched my way across the sketchy rocks and boulders. I was sure I was going to take a face plant. Rick had already made it down stream and I reeled like a mad man trying to catch up to the fish. Once we got him into the open water with a lower flow we were able to net the fish.

All in all, it was a great way to start the season. The day continued on and Rick brought a nice fish to hand on a glass rod – always an entertaining experience to watch. After that, we tried to get Kyle into a fish to complete the January-cyprinid-trifecta. He had a couple of nice shots, excellent presentations – but the deal would not be sealed. That is the nature of carp fishing sometimes. 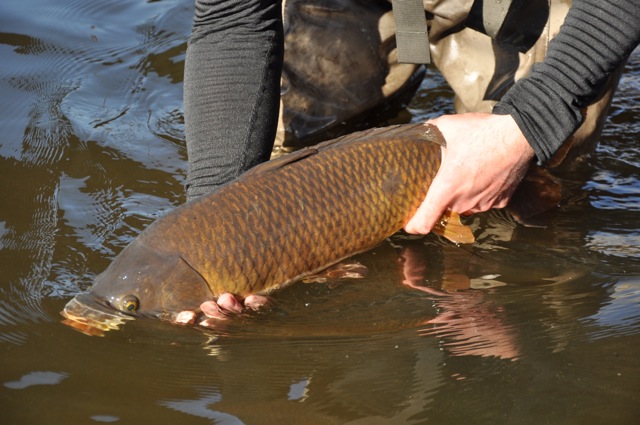 Glass and Gold: you can check out Mikesell's fish being released on our instagram hashtag: #troutsflyfishing

As we headed back to our trucks to wrap up the day, my buddy Kyle summed it up nicely.

“There are still plenty of days in January left,” he said. “I can still get my January fish.” 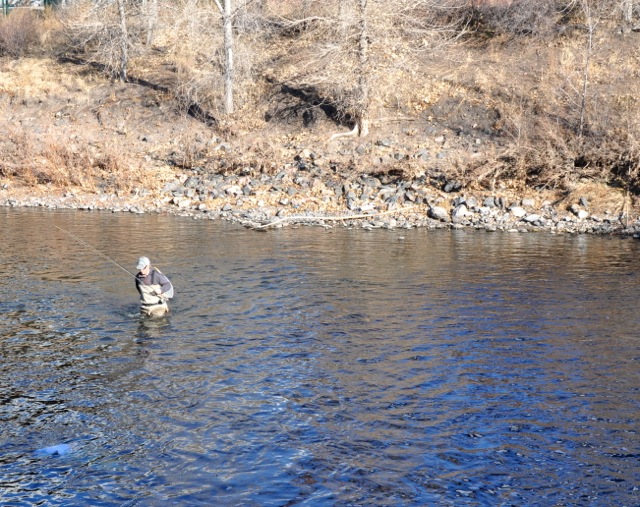 So true and well put. The season is young.