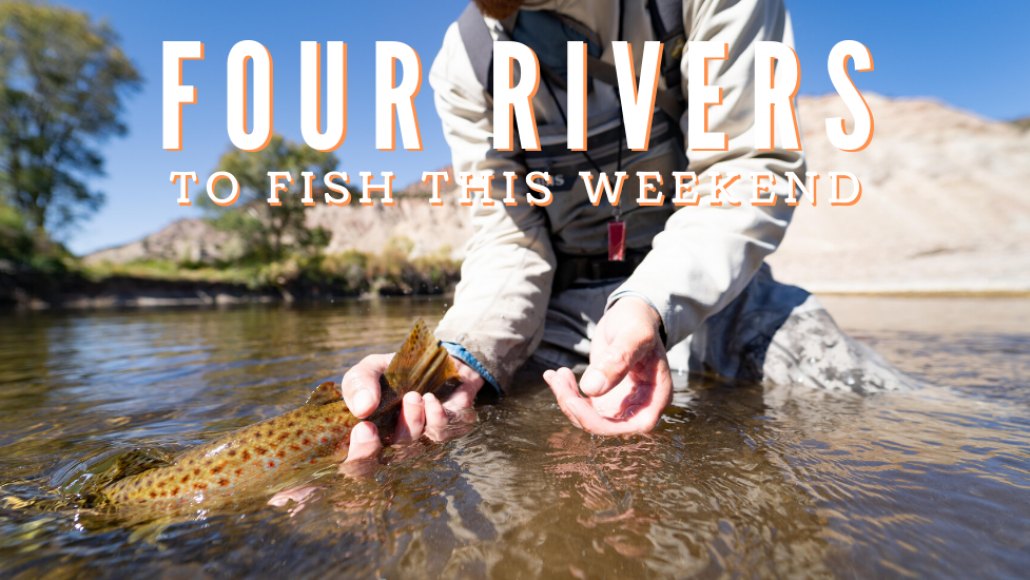 As we type, Colorado is sending October out in the most Colorado way possible, with record cold and impressive snowfall. However, if you look past the snowy forecast for Wednesday and straight into the weekend, you'll be pleasantly surprised. Sun and borderline mild weather is headed our way after this comically wintery start to the week. We're excited about that and it's our humble opinion that you should be too. We've done a little research for you guys and here's where we'd recommend fishing this weekend.

Cheesman Canyon
With temperatures for the weekend expected to be in the mid-40s and plenty of sun to be had, ole Cheesman Canyon should be a beautiful and productive spot to spend a weekend day this weekend. While the sun might keep the blue-wings from really making a strong appearance, midges and small blue-wing nymphs should be productive subsurface. Right about now is when brown trout start their annual spawn along this stretch of the South Platte. There are times of the year when matching the hatch can be very productive and this time of year, rainbow trout on the South Platte start to hone in on those orangish brown trout eggs that tumble downstream. Some might frown upon fishing eggs, but if you aren't one of those anglers, consider throwing a egg of any variety on your rig this weekend.

Middle & Upper Colorado River
As the first signs of winter start to show up along the Colorado, this can be one of the best times to throw streamers. No matter if you're fishing at Pumphouse or you're fishing at Hot Sulphur Springs, streamers can get the job done and we've had some banger days throwing small flashy streamers like the Kreelex. It's going to be distinctly colder along the Middle Colorado, Sunday would be the day to go with highs getting into the 40s. If you're not throwing streamers, small BWOs and midges below schmedium-sized stoneflies and general attractors will get it done.

Middle Arkansas River
When cold strikes in Colorado, go to the Banana Belt. Temperatures in Salida for the weekend are projected to be in the upper 40s and into the 50s and noticeably warmer than some of our favorite haunts. While there are no clouds in the forecast if you're looking to experience a little more fallish weather while enjoying some quality fishing, the Middle Arkansas is the spot. Expect fish to move into some of the slower water with the recent cold. Subsurface midges and blue-wings below smaller stoneflies and your go-to Arkansas River attractors will put the fish biscuit in the fish basket.

Eagle River
While winter arrived along the Eagle this week, it hasn't hit it's full on winter pattern yet. Sure, we're seeing more and more fish in the deep pools and they're picking off more and more subsurface midges and small mayflies. However, there are still fish holding in runs and riffles and it's one of our favorite times to throw streamers on the Eagle. Brown trout are looking to pack on pounds after their spawn and a gaudy streamer can do just the trick. Equally nice are the afternoon BWO hatches that occur, especially on the lower river, when the sun starts to drop.