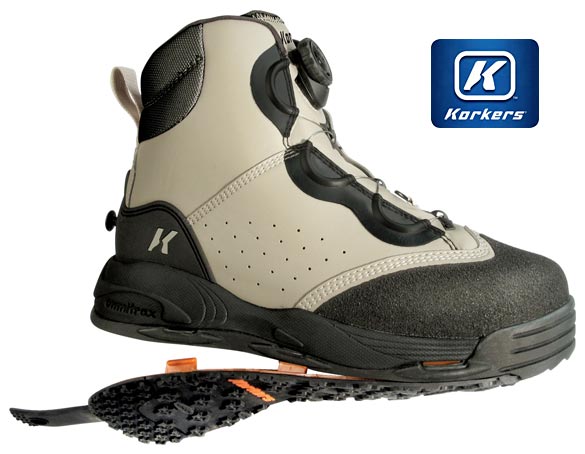 When I heard Korkers was going to come out with a new line up of boots for the 2011 season, I was super excited to finally retire my old Korkers Guide Series boot and get into the new Korkers Chrome! Even though I was mothballing my Guide series, they were still in great condition even after being worn for two years - clearly a testament of the quality of Korkers. I did have some complaints about the old interchangeable soles, which either tended to come loose at inopportune times, or worse...get gravel shoved in between the sole of the boot and the sole itself. Thankfully, Korkers eventually did solve the latter problem via their OmniTrax 3.0 interchangeable soles. That sole covers the entire bottom of the boot and allows you to change those soles with ease. Korkers also improved the BOA system, which makes it much easier to tighten your boots than it did with the old laced Korkers series.

But what really made me fall in love with this boot is how light-weight they are. The Chrome boot is constructed of whitewater rafting material, which is very lightweight and very water resistant. The Toe cap on the boot is made out of a strong rubber composite that adds protection without unnecessary extra weight.

When you buy your new Korkers Chrome boots they will come with two pairs of soles Rubber Kling-On soles, and Kling-On Rubber soles with Studs. Korkers offers other soles as well, such as felt and felt with studs, large studs on a Rubber Sole, and Korkers new "SVELTE" which is designed to be like felt but purportedly dries 4x faster by being significantly less absorbent than felt to start with. Korkers has really stepped up their game this year, and has a line up of boots than can clearly compete directly with the best of them.