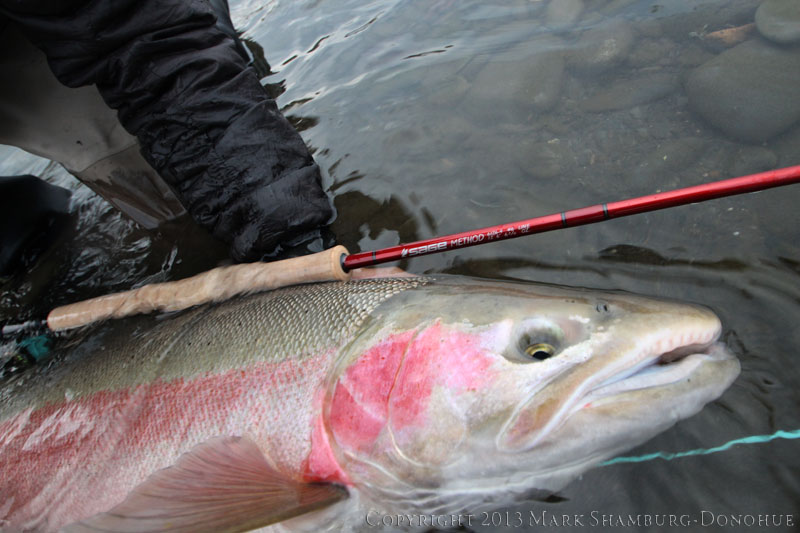 The Six weight with the Heart of an Eight Weight

Over the last several years I have cast a wide variety of spey rods in various sizes, shapes and makes and I had a pretty good idea what I liked or disliked in a 2 handed rod. Spey rods are built for power and if using good--or in my case adequate-- casting techniques, they are the perfect tool for the job when it comes to swinging flies for anadromous fish. At 12-17’ long, they’re going to move some line, so power has always been a term to describe them in almost any gear review or stream side chat. But one term I had never used before and almost never heard when describing two handed rods, regardless of make or model prior to this year was comfort. That is, until I fished the new Sage Method.

On my recent steelhead adventure to the Skeena System in British Columbia I used the Sage Method 12’6” Six weight matched with a 450 grain Rio Skagit Max and Rio ConnectCore Shooting line. I was excited to try out Sage and Rio’s newest equipment and put it to the test. Being a shorter and lighter rod than I typically use in BC, my plan was to use this rod for some of the Skeena tributaries known to have smaller fish on average, and fish my heavier rods elsewhere. What I would ultimately be surprised to find was that this rod had everything I would need to cast to, fish for and land some of the largest steelhead of my life, and it came in a lighter more maneuverable package than any other spey rod I had cast.

Stringing the Method up for the first time it seemed to me like it would be a great rod for smaller to midsized rivers and smaller sized summer steelhead, but it may not have the backbone needed to handle larger flies on heavy sink tips or land large fish in a reasonable time. The Grand Ronde River came immediately to mind, but it seemed a little out of place on the mighty Skeena system and her hallowed tributaries I was hoping to fish. Nonetheless, I was excited to get it on the water, but was prepared to break out my trusty Z-Axis 7136 if I felt under-matched.

It’s a given the first thing you’ll notice when you switch from a long 8-weight to a shorter 6-weight is that it’s going to be more comfortable, more maneuverable, snappy and light. But I was completely surprised that even though the rod is shorter and significantly lighter than an eight weight, it still had plenty of power to get the fly where it needed to be. By my second or third run, I began stepping up my terminal tackle, ultimately fishing with a larger Intruder-type fly on a 15’ Type 6 sink tip. I was pleasantly surprised and impressed at the ease with which the Method was performing. It cast smoothly and turned the large fly and sink tip over with authority, a sign that the rod and line were working well together. Before I touched my first fish I knew that I had a rod with more heart than its label displayed. I would be able to handle whatever this river had in store, yet I could cast this rod all day and I not feel worn out – a definite plus when you’re looking down the line at 2 weeks of steelhead fishing day after day.

The true heart of the Method came to play when I hooked my first fish that afternoon, which turned out to be an impressive 12-pound hen. The Method handled her exceptionally well; standing up to her runs, leaps and head shakes. At no point did I feel she was pushing the limits of the rod’s potential and I knew the rod could handle more. Before I brought her to hand I had already decided that the Method earned a seat as my go-to rod for the trip and it would easily accommodate larger flies, tips and fish. 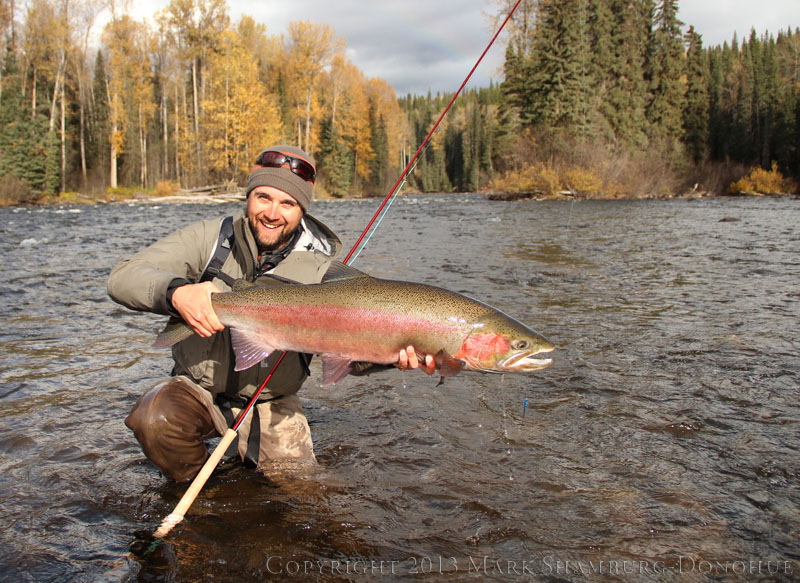 Needless to say, I was impressed with the new Sage Method and I was curious to see just how much it could handle. Throughout my two week trip, I fished the Method almost exclusively and I would have several chances to see exactly what the new rod was capable of. In fact, the 6126 Method would help me land some of the biggest steelhead I’ve ever hooked including two bucks over 20-pounds! At no point did I feel I was under matched against any fish or taking longer than I should to land them. I am fairly aggressive when it comes to playing steelhead; I believe in the strength of 15 pound Maxima and fighting with the butt of the rod. The Method had more than adequate backbone to put some serious heat on fish and I was confident in the rod’s abilities when I would hook into a large steelhead. The new Sage Method 6126 mixes comfort and cast-ability with power to land large fish. From the cast to the swing, and the hookup to the fight, the new Method’s power in a small package had won me over and become my new favorite steelhead stick.

This trip would also mark my rediscovery of fly line style shooting line. For the last several years I have been using monofilament, obviously appreciating mono’s ability to shoot through the guides for easy distance. But handling wasn’t easy and I was always taking time to straighten coils of line due to mono’s memory as I stepped into a run. Essentially, what I gained in distance on the cast I lost in frustration or hand cramps while setting up. Most of all I worried if the stretch of the line was causing me to lose sensation as my fly swung, especially when fishing at distance. 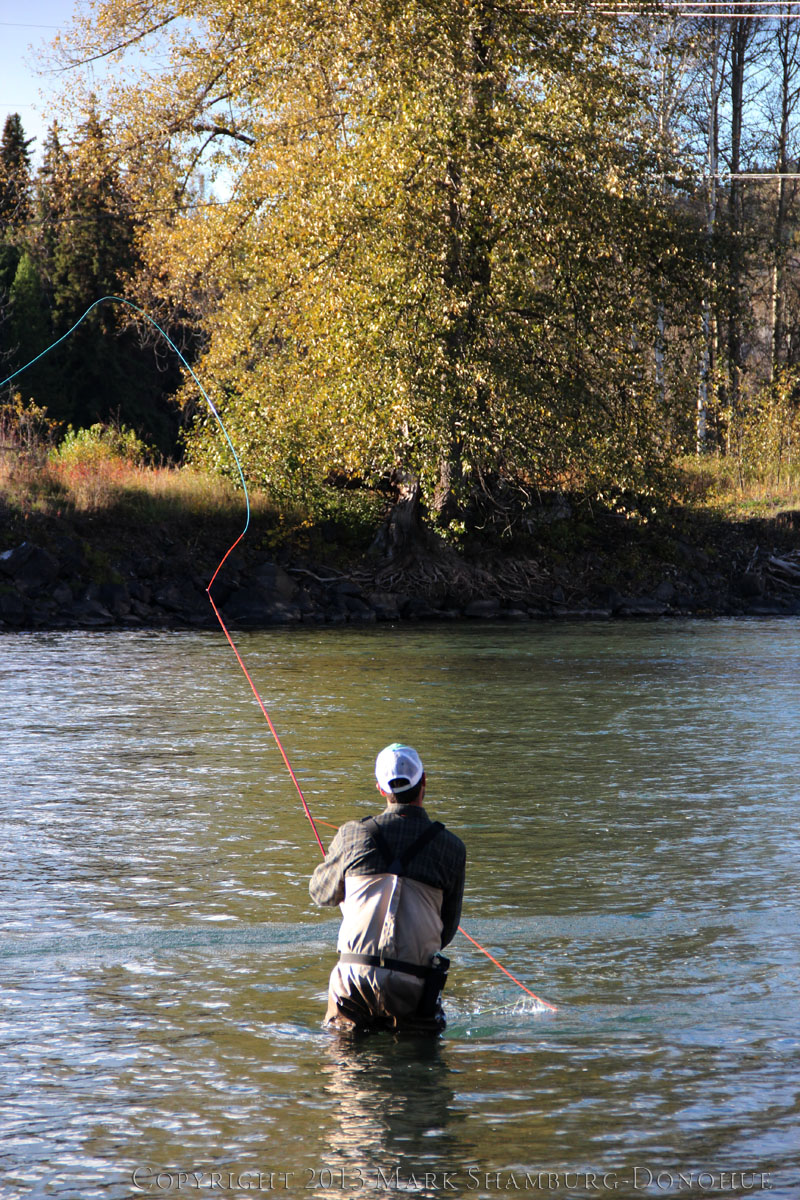 The Rio ConnectCore Shooting Line offered the perfect solution. Still very slick and gliding through the guides on each cast, I found distance was not being significantly reduced compared to mono. A heavier handling section at the front of the shooting line was very nice, and much like the Method, comfortable when casting. But where the ConnectCore really won me over was its high sensitivity, and my grabs were significantly more sensational due to its lack of stretch. Whenever a fish would climb on my fly, I was feeling it earlier, more positively. My reaction time was slashed and I felt keyed into what was happening with my fly, and hook sets seemed stronger. Overall, my land rate on this trip was higher than it has ever been previously, I wasn’t missing nearly as many sets and my hooks seemed more locked into the fish afterwards. As much as I like to think it’s because this Colorado boy is getting better at the steelheading game, I attribute a major part of this to the direct connection of the Rio ConnectCore Shooting Line.

Ultimately the Sage Method, Skagit Max and ConnectCore Shooting Line worked extremely well together and I was very impressed with how well this lighter, shorter six-weight handled larger rivers and some very large steelhead. If you find yourself regularly hooking large Steelhead, I would recommend stepping up to the 7 or 8 weight Method. However this particular model would be perfectly suited as a general well rounded summer steelhead rod for smaller to mid-sized rivers where a steelhead over 15 pounds is the exception not the rule. The Sage Method 6126 is the six-weight with the heart of an eight-weight and I found it could handle all I could throw at it.

Reid Baker is the Guide Manager of the Trouts Guide Service. Questions or comments, email reid@troutsguideservice.com or call the shop at 1.877.464.0034