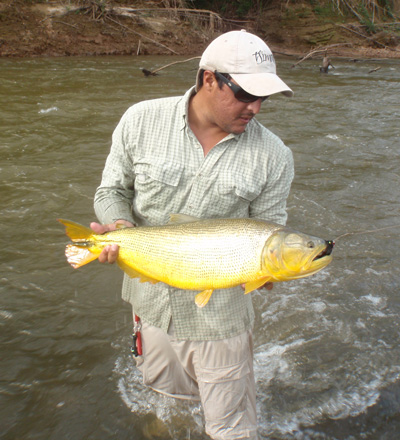 I must start off by admitting that when it comes to fly rods, I have always preferred something with a more moderate action. After a couple days of fishing, I quickly realized that the Tsimane lodge plays host to a variety of rivers, and having the appropriate rod for any given day absolutely gave me a leg up. Some days were all about smaller rivers, smaller flies and delicate presentations. Others were all about distance, accuracy, and the ability to turn over large wind resistant flies. It was on these days that the Sage Xi3 absolutely excelled. The Xi3 was developed as the ultimate saltwater fishing tool, so although I was in a freshwater environment, I found the fast action and fighting power of the Xi3 to be invaluable at getting the fly where I needed it, and muscling the fish away from any obstacles.

With that said, I did encounter some situations where I felt that the Xi3 was a bit too fast and powerful for the situation. On the days when we were fishing smaller rivers with crystal clear water, the Xi3 did prove to be too stiff to delicately lay out the fly, as well as loading at short distances. Yet despite this minor short fall, this fly rod without a doubt allowed me to cast my flies further and with more accuracy than most other rods would have. I would highly recommend this fly rod to any angler looking for a fly rod that provides unmatched distance and accuracy in their casting, as well as the ability to pull on fish like you wouldn't believe. If you're looking for a fly rod with a lot of feel, check out the Z-Axis line of fly rods as they will be more to your liking.

"On the flats, blue water or anywhere in between, your first shot is always the best shot. But, as experienced saltwater anglers know, sometimes that first shot means the bonefish you didn’t see until it was right here, and other times it’s an upwind bait ball way out there.

This increased strength comes in handy when you need to lean on powerful saltwater bruisers. Just as importantly, it gives you the backbone to pick up 60 or 70 feet of line on desperate second (and last) chance casts.

Our G5 construction adds improved line feel for easier, more intuitive casting, and specialized saltwater-specific components complete the package. In other words, the new Xi3 is everything you need to make that first shot count."