Gooned At The Lagoon: Part II 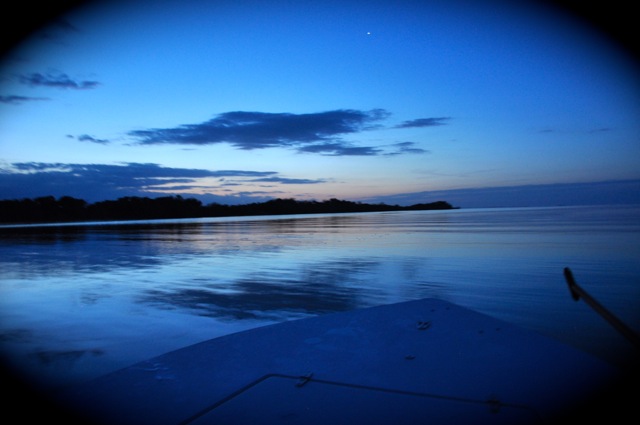 Mosquito Lagoon just a the sun begins to rise

When we left the dock at 5:30am it was dark out – pitch black. My guide, Captain John Turcot had approached from the south of Mosquito Lagoon and I could hear the whine of his Hell’s Bay skiff for a good two minutes before he reached me. As I watched him approach under the stars I could see that he held a hand torch to navigate the small creeks and cuts that riddle this inland waterway. We were getting a “O’Dark Thirty” start to chase redfish.

Mosquito Lagoon is located in the northern part of the Indian River Lagoon system and the Atlantic Intracoastal Waterway. It can be reached from the Orlando International Airport in Central Florida in just over an hour. From a fly fishing perspective, Mosquito Lagoon has earned its acclaim as a productive redfish fishery but it is also a big draw for bird watchers and other nature enthusiasts.

Dolphins are a common sight

As are oyster beds and a variety of birds

It has also picked up the nickname “the Space Coast” for its proximity to the Cape Canaveral and Kennedy Space Station. The day before I fished the Lagoon we saw this rocket launch from the beach. 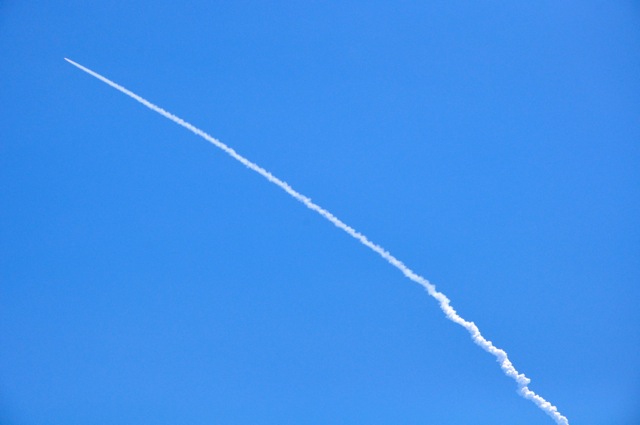 This was my fifth trip to Mosquito Lagoon and my day started much like many others. We found fish right out of the gate. This time, instead of finding a jittery school pushing a big wake we found a fairly good size single red finning and tailing in about 4 inches of water. At one point, his back was fully exposed. I dropped a fly about three feet from the feeding fish and it slowly moved out – not interested. I was quickly reminded that Mosquito Lagoon can be tough.

Later in the morning when the light was a bit flat and the tides were shifting we spent some time casting and picking up sea trout. The largest that came to hand was just over 15”. Later in the day we saw much larger trout that I’d estimate were in the 25” class. These fish proved to be spooky as well. 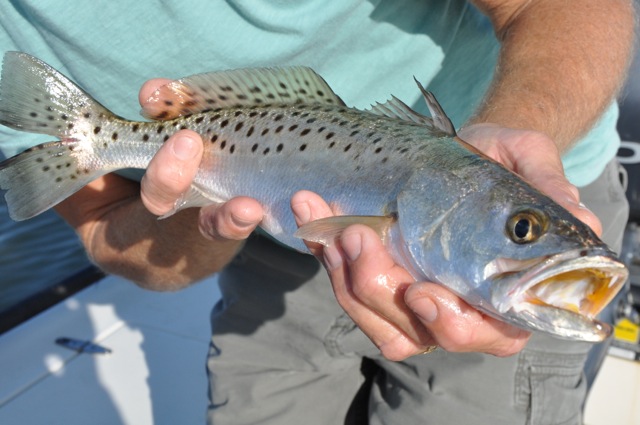 The water clarity throughout the day was often variable – which is often the case in Mosquito Lagoon. It was very clear in some places and it was off color and murky in other sections that were right around the corner. Overall, the weather was great – mid eighties, wind topping out at 10 mph. We did have some clouds that made visibility a bit tough. I’ve seen Mosquito Lagoon turn into a sea of white caps before, so overall, I couldn’t complain. 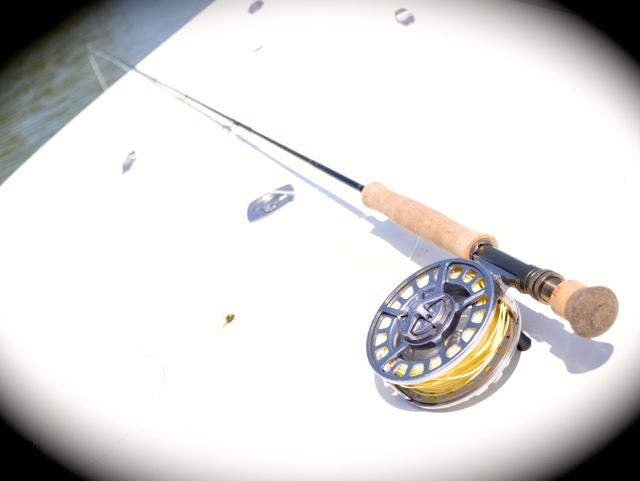 From an equipment standpoint, I went back to my Sage 890-4 and Sage 4280 fly reel. Again, both performed great further solidifying in my mind that this rod/reel pairing is an excellent all-around saltwater combination for a number of species and conditions. From a rigging perspective I fished a weight forward 8 wt tropical floating line, a tapered 12 lb leader and a 12 lb fluorocarbon tippet.

Once the light improved we were back to pushing across flats and shorelines looking for fish. We certainly had our fair share of opportunities. Most of the time I suffered “AE”…. a term I recently picked up in the Bahamas (stands for “Angler Error in case you were wondering). We fished for quite a while with the Kwan in both chartreuse and tan. We then switched to a smaller crab pattern with rubber legs. 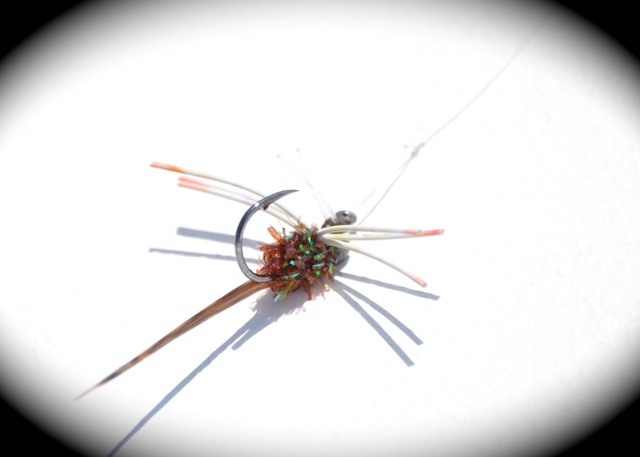 Late in the day we came across two smaller fish in fairly close to the boat. The entire transaction went down very quickly. I made one false cast and dropped the fly about 25 feet off of the front of the boat. The two fish both charged the fly and the smaller fish picked it up. It took off for a good run and I was able to get him back to the boat without much problem. I was just happy to get on the board. 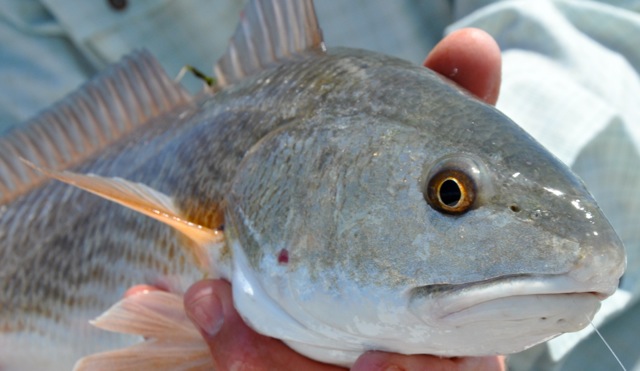 Later in the day I found a nice fish tipped nose down and tail-up in about three feet of water. He looked happy. I had a bit more time to make the presentation and this fish was eager to eat as well. After a nice long run and a short fight this fish popped me off. Again, I was just happy to be able to get a fish to eat.

Don’t let my experience with small redfish give you the wrong impression of the Indian River and Mosquito Lagoon - there are some BIG redfish in this system. On Friday April 11th the Daytona Beach News-Journal reported that a redfish was caught that measured 54.5” in length and a 33” girth before it was safely released. The fish was estimated to weigh over 60 lbs. well eclipsing the Florida State record redfish that weighed in at 52 pounds and 5 ounces. 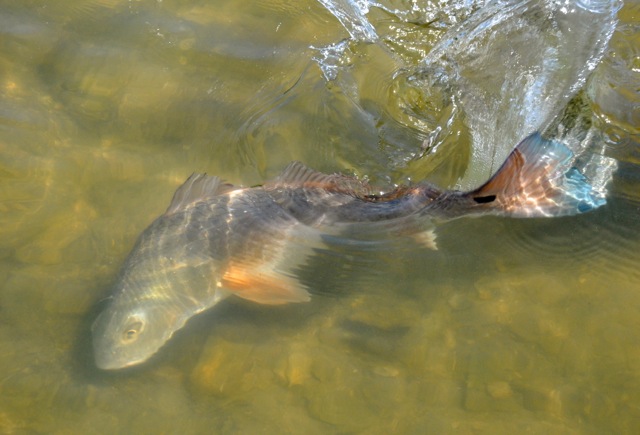 If you plan to make a trip to the Orlando or Mosquito Lagoon area and have any questions you can give us a call at the shop at 303.733.1434. If you would like to fish with Captain John Turcot, you can find his contact information at www.backcountryonfly.com/.