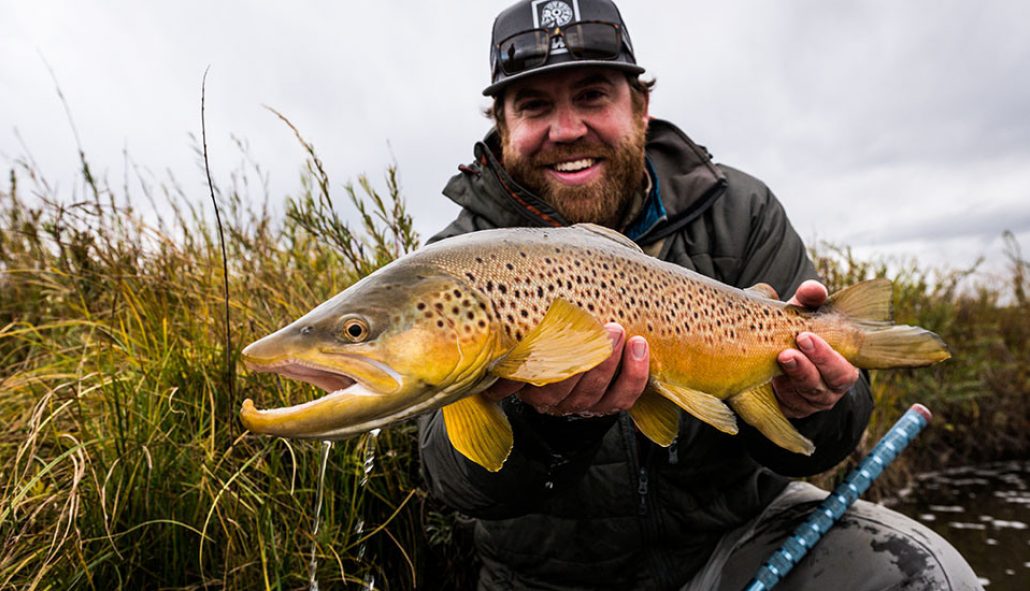 It’s supposed to snow this week? What? Wasn’t it just 85 degrees a week ago? Wait, it’s October already? S***, where are my waders? These were my thoughts this past Sunday night when Ivan and I were talking about where we were heading the following two days. We threw around some ideas, checked some weather forecasts and settled on heading north to fish streamers along a stretch of water that I can’t seem to remember the name of. Conditions looked ideal, and by ideal I really mean horrible. Highs were projected in the upper 30’s and lower 40’s, with sustained wind gusts between 15-40 MPH all day and blowing snow starting around 3 PM Monday, lasting through Tuesday. Great, I thought. Unfortunately, I don’t have the ability to not go, when fishing is what I am going to do. Besides, Ivan had a hall pass from the wife and baby to get out for a few days. So, being the great friend I am, I told him he was driving and that I probably wouldn’t be up when he got to my apartment.

Ivan told me he’d be at my place by 4 AM Monday morning, so I set alarms for 2:30 AM, 2:45 AM, 3:00 AM, 3:15 AM, 3:21 AM and 3:50 AM. Somehow when Ivan pulled up, I still wasn’t ready to go. Maybe, it’s just me, but it’s always a struggle to get motivated that first early cold morning trip after the summer season. As we drove up that morning, I was hopeful the weatherman was wrong. He wasn’t. The last hour of the drive was full of looking out the window and watching grass shake in the wind. When we got to the parking lot it was about 8:30 AM and the car thermometer said it was 28 degrees outside. I looked at Ivan and laughingly told him I probably should have brought wool socks and sweats for underneath my waders. If it sounds like I wasn’t overly excited to be there that morning, that couldn’t be further from the truth. With all the non-ideal conditions of fishing in the cold, there are some perks that a summer day can’t match. When you fish places that see limited amounts of traffic in the summer, it’s a sure thing you’ll have the place to yourselves in the fall. The worry of beers getting warm in your pack is no longer a concern. Oh, and did I mention, you’ll have the place all to yourselves? These are the two best things about fishing in the cold. I just wish I could wake up at 4:00 AM this time of year and skip immediately to being in my waders, on the water fishing.

As we rigged up, we could see across the meadow. There wasn't a soul in sight. There aren’t many things in life that excite me as much as looking out across a meadow and not seeing another car for miles whatever way you choose to look. It was now time to throw streamers and belittle each other for the next two days in a way only fishing buddies can. The nice thing about fishing with your best fishing buddies it that there really isn’t any pressure. We fish slow and alternate runs watching each other work water, while voicing our opinions on what they should have done better. There is always that interesting dynamic with your good buddies. No one really cares who catches the most fish or the biggest fish. There is also that dynamic where you hope your friend fails miserably and also catches a big fish at the same time. I haven’t quite decided which is better, having the opportunity to beat a friend while they are down or enjoying a celebratory beer with them after they land a nice fish. Probably a little bit of both.

With all the snow we got earlier this year, it was really nice to see the river up a little in comparison to what it usually is this time of year. Good water, crappy weather, streamers and brown trout generally make for a pretty good combination. This river has been known to be a little moody. While so many rivers in Colorado are stocked with countless amounts of 12 inch rainbows that provide a lot of us with false confidence as to our skill level with a fly rod in our hand, this specific creek has relatively low fish counts, that happen to all be Brown trout. Needless to say, our bar was set pretty low from a numbers aspect. But all it takes is 1 or 2 fish here to make a day.

As Ivan worked the first run, he got a big chase from a sizable brown that short striked him at his feet. A couple more casts into the run eliminated all hope of him getting a second chance. However, it was a good start that seemed to set the tone for the day. For the first half of the day, action was fairly consistent--about 1-2 chases, grabs, or eats per run with a few nice fish put in the bag. We got to a run that is picture-perfect for streamers. It had a riffle foam line that ran along an undercut bank for about 15 yards. It just so happened to be my turn. Being my usual self I had to run my mouth. I said to Ivan something along the lines of, “Get the popcorn out big boy, it’s showtime.” It was indeed showtime, however not the type of showtime I was looking for. Immediately, a big brown shot out of the bank and exploded on my streamer and just as soon as I stuck him, he was gone. Plenty of cuss words followed. This process was repeated 4 more times through the run, much to Ivan’s enjoyment. JV was my new nickname. Day one provided a handful of nice fish but, not “The One” we were looking for. Combine that with my lackluster effort and it’s needless to say Ivan had a good time sitting around the campfire reminding me about it all night. To start day 2 we decided to hike up the meadow and fish water we didn’t touch the previous day. Something felt a little different that morning. My first run, I looked over at Ivan and told him I was about to catch a nice fish. Sure as s***, a butterball of a hen slowly slid out of hiding and ate my Kreelex on the slow retrieve. Ivan quickly followed suit, tagging a nice one not even 5 minutes later. Fishing was on and off for the next portion of the day, but all the fish committing were really nice fish. The only thing left was to do was get really lucky and find that one.It is funny looking back on trips like these and remembering how you tell yourself that a three fish day would have sufficed, but somehow I wasn’t satisfied in the moment after we had probably put 15 to 20 browns in the net ranging from 16 to 21 inches.

Then it happened, the way it just sometimes does. We know this river well and can relay stories about every run; which ones have produced what, on what, and when it happened. We found ourselves in the middle of a stretch where we have caught fish, but we usually fish through fairly fast because it doesn’t have the holding water where the overly large fish usually hangout. That thought quickly changed. Ivan had been reminding me all day, that I belonged in the D-League or on the C-Squad team. Then, I dropped a cast over a willow into this back eddy. You know those casts. The ones where you basically reach cast and drop your streamer in the pocket while giving it a few twitches with your arm to create the action because you don’t have enough line out to actually strip the fly. As soon as I made the first twitch a big brown decided my streamer shouldn’t have been in his hole. He hammered it and immediately went airborne. “Oh, Bleep,” was the next thing that came out of my mouth. (I’ll leave it to your imagination as to what word that “Bleep” was.) Ivan handed me the net and I began playing the fish into a slower tailout. The nice thing about streamer fishing is, once you hook up and get past the first initial run and headshake, the battle is generally won. The perks of 0x and big hooks. And just like that the JV nickname went away.