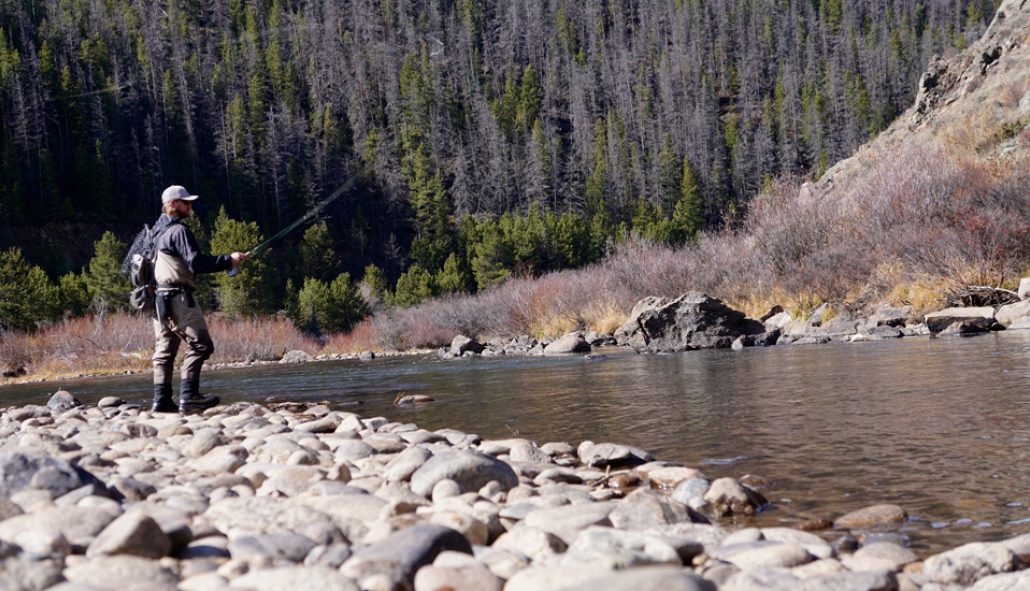 So you’ve stopped by the fly shop (hopefully Trouts) or read a fishing report or two to figure out what flies you should be packing to the river. From the sounds of the reports you just read or heard, paired with the pictures you’ve been drooling over on Instagram and Facebook, the fishing appears to be on fire. The only thing looking better than the stream flows is the weather and you can’t wait to put the workweek behind you and get on the river. You wake up before your alarm goes off and are out the door. You might even have the radio turned a little louder than normal as you cruise down the highway and can already see the picture of yourself holding an obese trout circulating around the social media highways later this evening as you toast a cold Coors and relive the day.

You’re starting to think about lunch and you still haven’t caught a trout- or even hooked one for that matter. You know your flies are right because you’re using exactly what the guy at the fly shop told you to and you’ve seen a few other anglers catching fish. You even went up to one of them (after a healthy swallowing of pride) and asked them what they’re using, only to noticed it’s nearly identical to what you have tied on! So what’s wrong?

Sound familiar? It should to all of you. Whether learning to fly-fish or learning to fly-fish a new river, there is nothing other than time on that particular body of water that’s going give you confidence to consistently catch fish out it. I think we’d all agree that the moment doubt starts to enter your head- it becomes much, much tougher to catch a trout.

So if you happen to find yourself in the above-mentioned position, the reason for this all comes down to the big P-word…..Presentation. Here are 3 things that are likely going wrong with your approach and how to correct them.

Focusing On The Big Picture- When you find a section of a river that you know is holding fish, catching those fish typically requires more than just casting right into it and waiting for your thingamabobber to take a dunk. Sure this will work sometimes, but if you’re A) on a pressured river B) it’s during the middle of winter or C) both , it’s more than likely not going to be your best approach to get consistent results. Rather than just seeing a spot and casting into it (focusing on the big picture), you should constantly be working at focusing on the small picture. Take a minute or two to sit back, observe the location, and really dissect it. Don’t get overwhelmed by the ‘it all looks so good’ mindset and start flailing away. Focus on your area and forget about the rest of the river for the time being. What works best for me is to picture an imaginary grid being placed on top of the run. When it’s time to start fishing, only focus on a small, specific part of the grid and be very systematic about fishing it- even if this means selecting a certain number of drifts to put through it. Let’s call these areas ‘Zones’. Depending on the size of the spot you’re fishing, breaking it down into at least 5 zones should be your goal (for example: close side of the run/middle of the run/far side of the run/top of the run/ bottom of the run). Once you’re confident that you’ve fished Zone 1 thoroughly, move on to Zone 2. Putting a systematic plan into place for fishing a run is going to make you much more focused (because now you’ve forgotten the rest of the river and are just paying attention to one small zone), efficient (because you won’t be wasting time repeatedly casting into unproductive water) and confident (because you’ll know when you’ve worked an area thoroughly and it’s time to move on to another location).

Not Building Upon Your Results- This is another biggie. Let’s say you’ve fished your first spot of the day and managed to catch a fish. Did you pay attention to where EXACTLY you caught it? Otherwise known as ‘which zone did it come out of?’ Now you’ve moved on to location two and managed to catch 2 more. What ‘zones’ were they in? Very rarely will all five zones (if 5 is your magic number) produce fish. Sometimes they’ll be in the fast middle of the run, sometimes on the soft edges, and other times they’ll be in the back of the run. Once you’ve caught two or three fish, you should be able to hone in on where the fish are holding that day. When it comes time to move to another location, you can increase your efficiency by ignoring those ‘zones’ that haven’t given up a fish all day. An example of this would be fishing during winter. Right now you should be focused on the soft edges next to the fast water. While the fast water running right through the middle of the run can be great during the middle of summer, that’s never going to be the ticket during these next few months. (and yes, you’re welcome for helping you eliminate one of your 5 zones before you ever even hit the river) Remember, people who catch a lot of fish are doing so largely due to the simple fact that they're just putting they're flies in the right places! Paying attention to where you're getting results and then only focus on similar areas throughout the day.

Not Watching The Bubbles- Now I know some of you have heard me mention this before, but paying attention to the bubbles is singlehandedly my biggest key to success any time I’m not sight fishing to a particular fish. First off, bubbles on the surface are something you should always keep an eye out for because bubbles=oxygen, and trout love oxygen (particularly right now when the rivers are low and there is less oxygen in the water). When nymphing, it is absolutely crucial that your strike indicator is floating slower than the bubbles on the surface. The trout are going to be sitting right on the bottom of the river and the water flowing along the bottom of the river is moving slower than the water on the top of the river. Therefore, if your indicator is floating at the same speed as the bubbles on the surface then you can rest assured that your flies aren’t getting down to the fish- and if they are, that they’re zipping past the fish at an unnatural rate of speed. Dialing in this bubbles vs. indicator speed ratio is as simple as adding more weight and depth to your nymph rig. It’s an extremely simple concept to grasp once you see it in action, but is one of the biggest reasons I feel people don’t catch as many fish as they should. They’re just not getting down to them.

Interested in learning more about presentation, covering water, and fishing during winter? Here are some recent related articles that tie in nicely to this.

As always, thanks for keeping an eye on the Blog and let us know what we can do to help make your time on the water more enjoyable and productive.

Additionally, got a fishing question of your own? Got an idea for a topic you’d like to see discussed here on the Blog? Feel free to email me directly at kyle@troutsflyfishing.com

Thanks again and good luck out there!