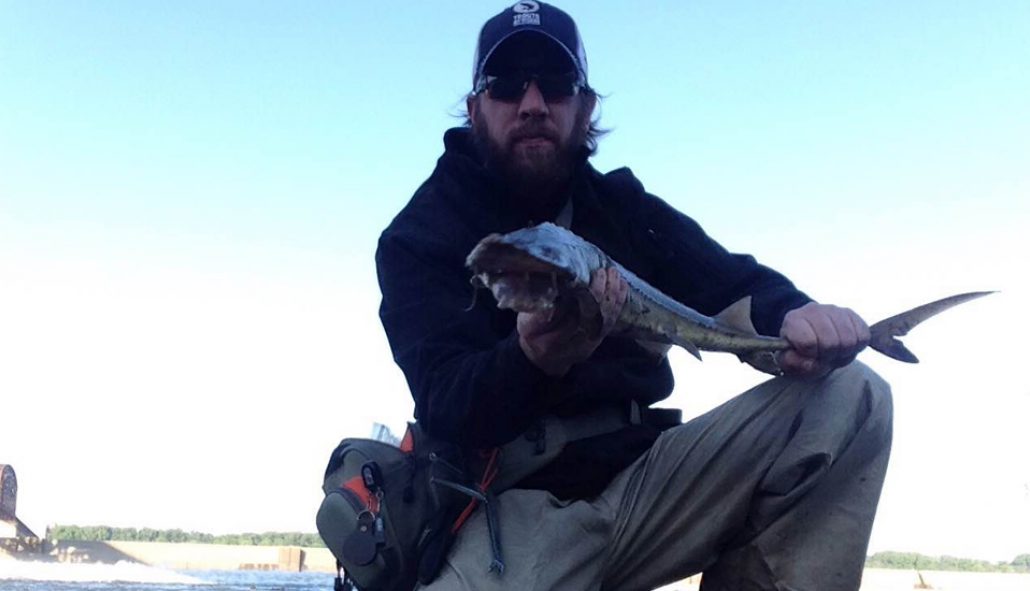 It's a constant goal of mine to have fresh, useful and interesting content up on this Blog. Recently returned from a trip to his former stomping grounds of Kentucky, Trouts employee Doug Gord came back with stories of warmwater bliss sourced with a fly rod in hand. As Doug and I chatted about his trip, we were quick to realize he and I both have a similar soft spot for fishing midwestern waters and that his time in Kentucky, paired with my upbringing in Southeast Kansas, had us both heading to the water on countless humid summer days looking for the exact same species to eat our flies. Doug mentioned he'd do a write up about his trip and had some photos to go with it. Excited for fresh content, I didn't look too much further into it. Once presented with said draft however, I was incredibly impressed. Let's just keep our fingers crossed that Doug doesn't put down the pen anytime soon. Thanks for sharing Doug! -Kyle Wilkinson

The Falls of the Ohio are situated behind a dam on the Ohio River across from downtown Louisville, KY. Construction of dams and locks began in the early 1800’s which led to the current day McAlpine Dam. The landscape embodies urban fishing as the Louisville skyline peeks over the walls holding back its crushing water. Its riverbanks display how it has been hit hard by rampant pollution. Chemical slicks, oil drums, and literal tons of garbage were common sights in years past and unfortunately nothing has changed. Yet if you take time to observe the ground, you’ll notice you’re stepping on fossils dating back 300 million years.

The portion of river below McAlpine exposes a massive Devonian fossil bed with entombed prehistoric skeletons buried in its rocks. One of those ancient creatures still inhabits the river to this day. Close your eyes and try to picture a barracuda with a pterodactyl snout. An odd visual, but it’s a fairly accurate representation of a longnose gar. Gar are a fascinating fish; essentially freshwater torpedoes with teeth. They are some of the hardiest fish around as an evolved air bladder allows them to gulp air and live in harsh environments that would kill most other fish. It is no surprise that they are one of the top predators in the fishery and play a crucial role in balancing the river’s ecosystem. I caught my first gar as a teenager on a flood ravaged day at “The Falls.”

I have a superstition that I developed back then. I would pick a stopping point where I would settle on making 3 more casts before leaving.

To this day, I’ve always made one final cast after that countdown. Perhaps it’s for good luck? I don’t really know. On that day, my line abruptly stopped. At times it can be difficult to judge whether you are tied into a fish or hung up on the jagged rock edges of the fossil bed. That last cast wasn’t one of those times. As a word of advice, I highly recommend jaw spreaders and a long pair of pliers if you ever land a gar. As I learned that day, their mouths contain hundreds of tiny razor sharp teeth that aren’t much fun to pick out of your hands days later.

I arrived into town on Thursday afternoon for the Indy 500 that weekend. It was a familiar tradition marking my 21st race in a row. I was excited as I found myself in another familiar activity while I drove to the river early Friday morning. My main target for the day: some big, bad longnose gar. Getting to the dam, I decided to stop at the first parking lot near the area where water is released from the gates. When the river levels are right, tons of water will rush over a slot on the northern edge of the retaining wall. This creates about a 200 yard channel that meanders all the way to the main river. When flows are up, it forms into a twisting network of rapids, eddies, and mangled trees. Baitfish congregate in the area which creates great hunting grounds for the rivers apex predators.

I made my way down the mud filled bank holding an 8 weight Sage Motive rod paired with a Sage 6010 reel. It was a beefy combo that would get tested if I hooked into a 5 or 6 footer like I had seen on the hot summer days in my youth. The outfit would serve useful in the event I mixed into drum, wiper, or any of the river’s countless other species. I’d learned over the years that you never knew what to expect fishing at The Falls.

I rigged up a 10 lb Rio Fluorocarbon Bonefish/Saltwater Leader and attached a chartreuse/white clouser. I began wet wading close to the mouth of the feeder channel, fishing an 8-10 foot deep seam line below a series of rapids. I had fished it as a kid and knew it was an ideal holding spot for hybrid striped bass to nab baitfish that were swept downstream. On the second drift, my rod doubled over and a fish surged upriver with enough willpower I thought it wanted to smash through the walls of the dam. I got a quick glimpse of its profile and assumed based on the shape that I was tangling with a massive gar. I was abruptly taken into my backing when the fish made a U-turn back to the main river. As it got to the main channel, I was able to get a decent look at the fish as it rose to the surface. It definitely wasn’t a gar. The problem? I had no clue what I had just seen.

As I worked the fish to shore my jaw dropped as I gazed down upon a sturgeon! It was a shovelnose sturgeon which had an exterior more akin to a Sherman Tank than a fish. Its streamlined shape revealed how it had adapted to the rivers fast moving currents over millions of years. Catching a trout is cool. Catching a sturgeon that looked like it should have a SyFy channel movie based around it? That made for one of the more remarkable fishing moments of my life.

I went back to working the same section that held the sturgeon and saw gar breaching the surface. Due to their teeth, I switched to a 30lb 7.5’ Rio Toothy Critter Leader and clipped on a braided needlefish rope fly I had tied earlier. For those unfamiliar with rope flies they are usually tied as a baitfish style streamer pattern. Instead of conventional tying material like feathers, you use unraveled strands of nylon rope tied down to a shorter shank hook like an Umpqua TMC 800s. However, hooks don’t serve a ton of purpose in gar fishing as their mouth is bone and getting a hookset is nearly impossible. Instead, gar attack the rope fly and must be allowed to chew on it which gets caught in their teeth.

I shot a cast upstream at the edge of a rapid and felt slight pressure on my rod in the middle of the drift. I slowly lifted the rod tip to check and see whether I was hung on the bottom or could feel a fish. It was a technique I had learned during many sleet filled winters of technical sauger fishing. At the Falls, I tend to be less concerned with getting good movement out of my fly as I do making sure I am constantly near the bottom as I feel my way through the rivers numerous snags. The current seems to create enough action for the fly to entice fish.

I felt the weight of the fish and maintained light tension before snapping the rod to bury the rope fly. A 30 inch gar shot from the bottom and snaked across the surface before getting airborne. It rushed downstream similar to the sturgeon and made another desperate leap. Pulling its best tarpon imitation, the fish got airborne again and was successful in throwing the fly mid-flight. Bummer.

I moved my way upstream and found a decent sized eddy which held more breaching gar. At the end of one my swings I spotted a tail burying itself into the mud in front of me. After grabbing some carp flies from my box, I began combing the silt bottom. A few casts produced a few smaller freshwater drum. I again pitched the fly upstream below a tiny water fall.

Lifting my rod tip, my hopes were crushed after dejectedly realizing it was a snag. After trying everything to pop the fly out, I resigned to the fact that it was time to break the leader. I set the butt on the ground and began pulling the fly line towards me. However, the fly line decided it was a good time to move about 20 feet upriver. I scrambled to grab the handle and set the hook again for good measure.

I was sure I had a fish on, but couldn’t budge whatever was connected. Finally, the fish woke up and charged with me holding on for dear life. After the initial burst, I began walking the fish backwards to pry him away from the faster current. A substantial amount of redneck-based dopamine filled my brain as a mid-20 lb drum materialized out of the turbid depths. The tail was about the size of my head! It had enough toying around and bolted downstream which put me into backing yet again. I slipped across the fossilized muck chasing down the fish before it had the chance to reach the main channel. Another huge surge and the fly came shooting back out of the water towards me. The hook had bent backwards releasing the fish under the enormous strain. Double bummer.

It was a bumpy stretch losing those fish, but sometimes you just have to find the good in things.

Trying to catch up to the drum forced me to run all the way down to the main river. I gazed out and witnessed about 100 yards of the water exploding with baitfish. There were hundreds of smaller fish trying to escape predators that were chasing underneath. If you’ve ever been fortunate enough to be in the middle of “the jumps” you know how chaotic it can get. I quickly switched back to a clouser and shot casts to the edges of the baitfish clusters. A split second later and I would be hooked up. It was a combination of white bass and skipjack herring that had bunched their prey onto a calm, 2 foot deep section of fossil bed flats. The jumps continued for a little over an hour and I was able to haul in around 20 fish. As is usual with fish in the jumps, the action came to a screeching halt. It seemed like perfect timing.

I prepared to make my final cast, but didn’t even care if I hooked into anything. I had just experienced my most exciting day ever at the Falls. It was hard not feeling a bit nostalgic. I’ve been fortunate to have fished all over North America and will maintain that The Falls is among the more challenging fisheries in the world. Sure, it isn’t the most scenic fishery, but the changing river conditions seem to test a fisherman to their absolute limits. On that day the gar got the better of me.

It’s always amazed me that most people consider gar and many of the rivers other species “trash fish.” Me? I’ve always marveled at the evolution of those streamlined beasts. 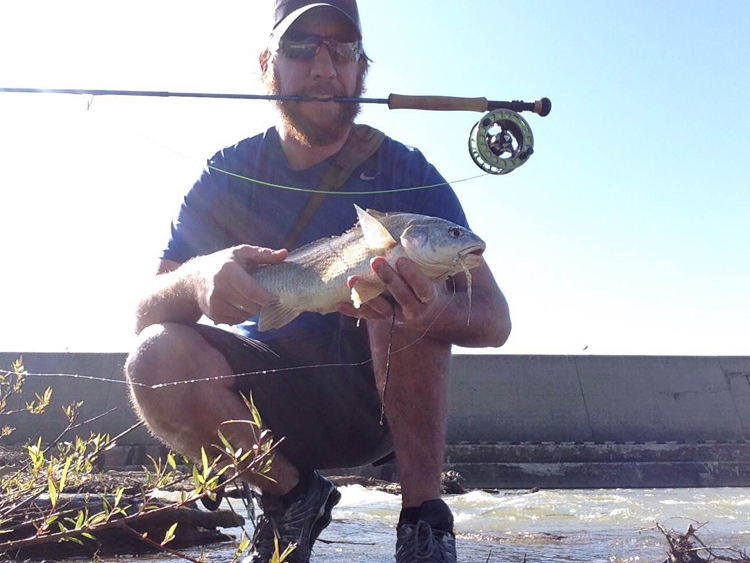 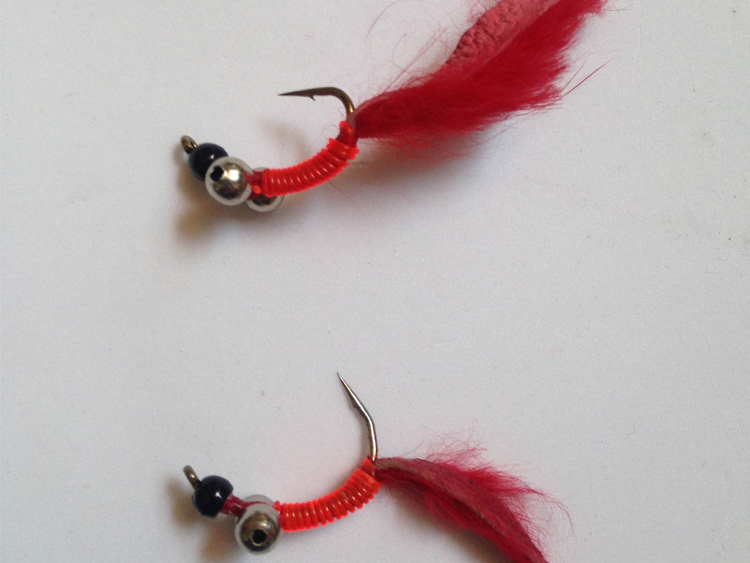 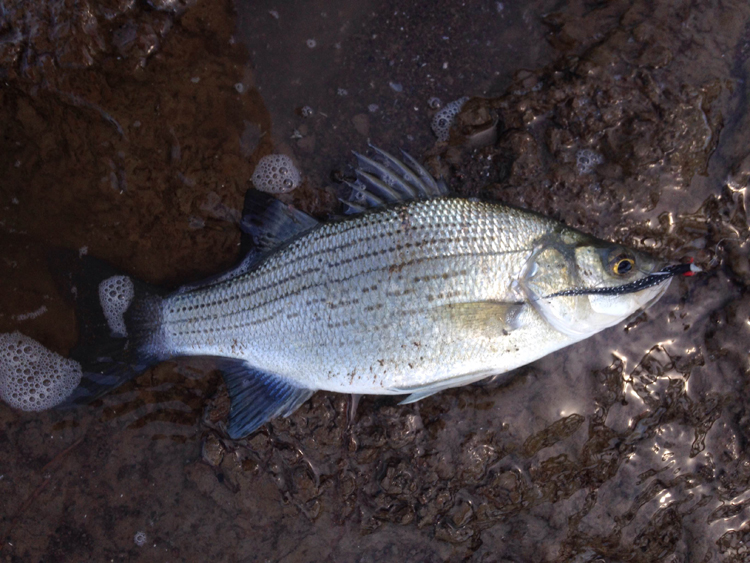 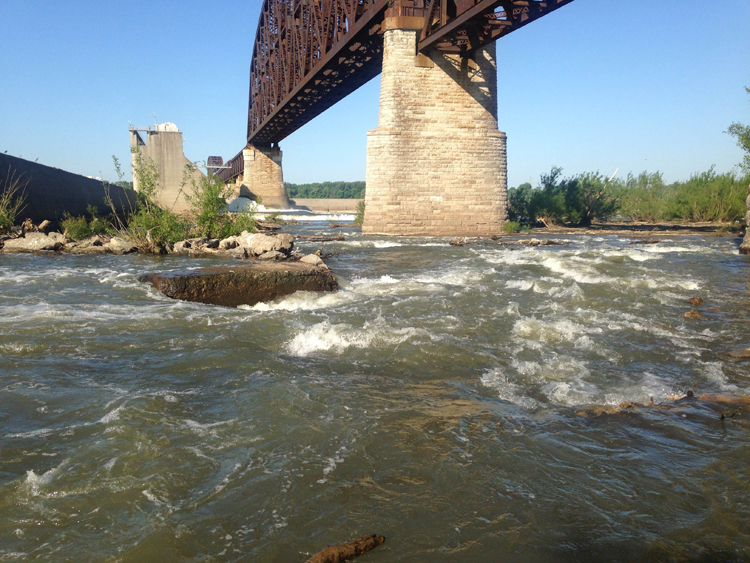 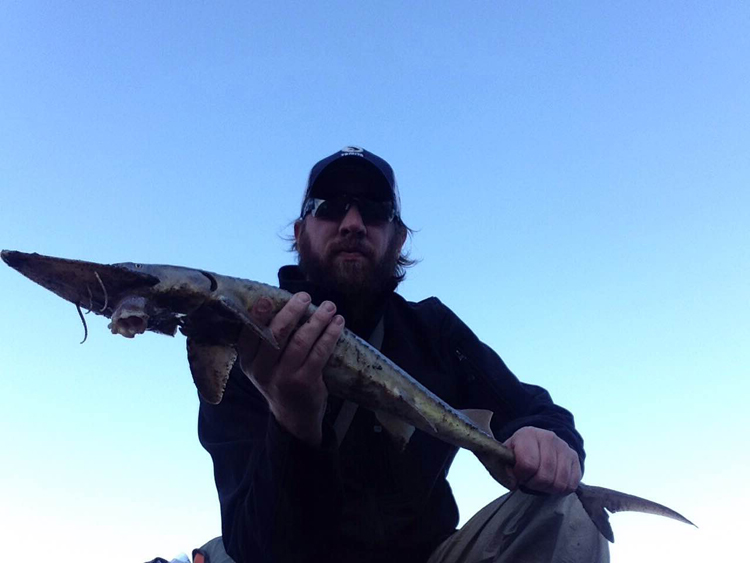 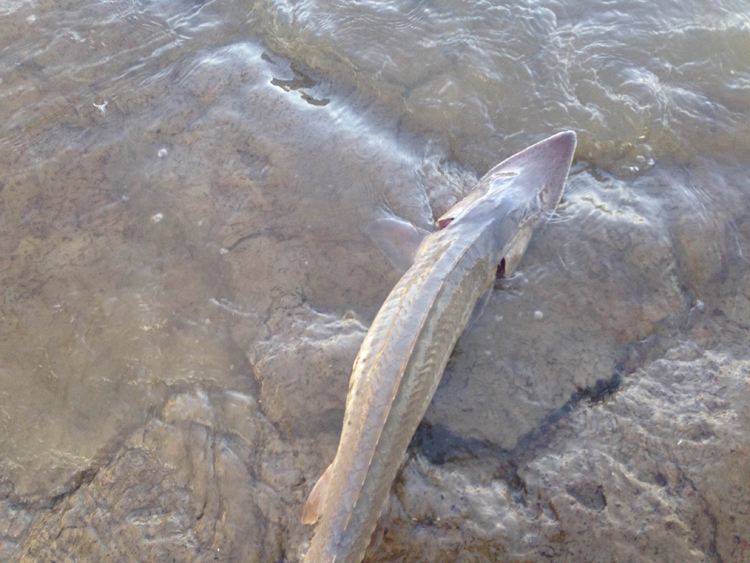