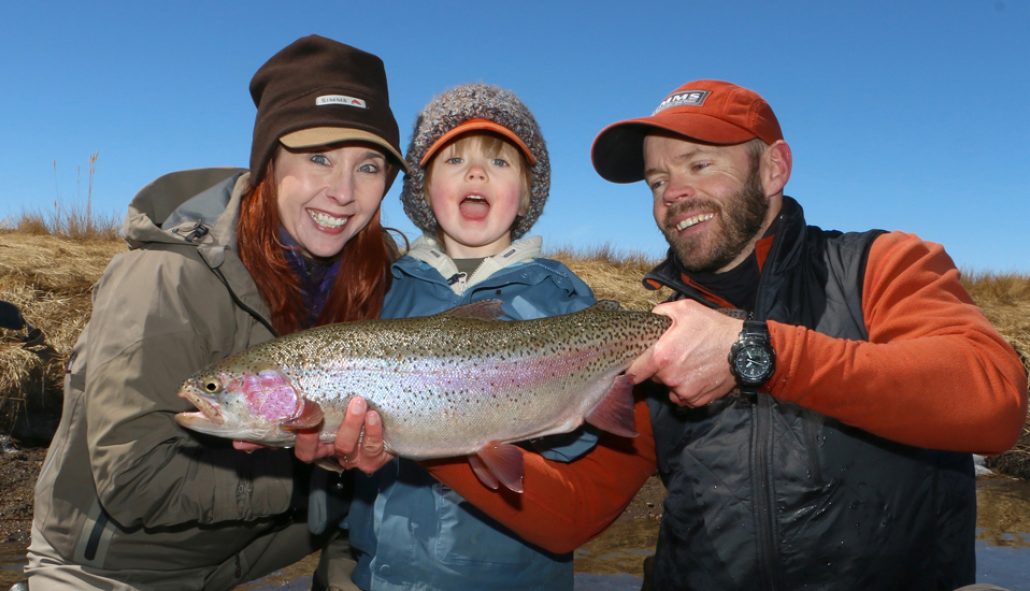 Landon Mayer is without a doubt one of the most recognized fly-fishing guides around. His face has appeared on nearly every fly-fishing magazine and odds are -whether you know it or not- you've likely already learned a thing or two from him, as his how-to tips and articles have graced those same pages countless times. I've been around countless fly-fishing guides over the past decade and I can say with certainty, Landon is as first class as it comes. The professionalism, ethics and love for the sport are something we should all admire and learn from. We recently sat down with him to learn a little more about the man behind the beard and polarized sunglasses-- who always seems to catch bigger fish than everyone else.

Trouts: Let’s start from the top on this- Why do you like to guide? How did you get your start and what keeps you getting out of bed each morning ready to hit the river again?

LM: I appreciate the challenge it brings helping anglers from all skill levels learn how to fool fish, not to mention the knowledge gained everyday by seeing the angler, the water, and the fish, not just the water and the fish. I got my start by meeting Dusty Sprague in 1997 at the Peak Fly Shop. Dusty was the manager of Colorado Fishing Adventures and he was kind enough to let me start that very summer with the likes of other great guides like Ed Engle, Phil Camera, Matt Bynum, and many more. From the moment my feet hit the ground getting out of bed I still feel like I have won the lotto knowing I get to meet new anglers or clients that have become great friends over the years and take them fishing, are you kidding me, it sounds unreal!!!

Trouts: Describe your perfect day both A) guiding B) fishing for fun 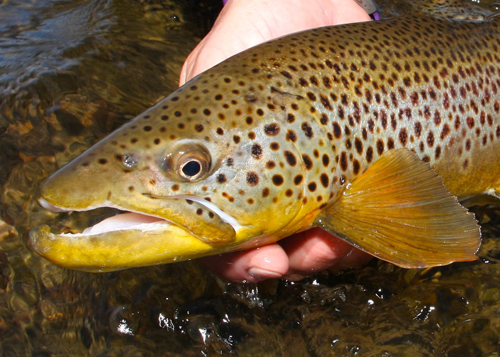 LM: A) For me having anglers perform using all three disciplines, dries, nymphs, and streamers and catching fish with the major three is true a home run. They will leave the river with confidence from that moment forward and gain information that honestly could have taken years to learn, but they achieve it in 8 hours. B) I love the days on the water when you things are tough and you say to yourself “the hell with matching the hatch” and you put on something off the wall like an adult Crane fly and “bang”. Fish are races over to attack the fly. Those moments are a breath of fresh air that remind us we don’t have to over think how to approach every situation on the water.

Trouts: Favorite species to target on the fly?

LM: My favorites are trout because of their ability to adapt to their surroundings. Making us have to be on our A-game everyday knowing we have to adjust with the fish. The coolest species I have pursued on the fly are Roosters in Mexico. Watching that combed fin rip through the saltwater just off the beach in early light was quite a sight!

Trouts: What is the top mistake you see people make fishing that keeps them from catching as many fish as they could/should?

LM: Without a doubt, touching the reel during the hook set or fight. It is stamped in almost everyone’s mind that you start to reel when you have a fish on. I think it comes from the first fishing experience most people have at a young age with conventional gear, when you can reel while line is being released. Sure some fly fishers are skilled enough to line fish to the net, but why take the risk when you know the reel and great drag system of today will apply tension when needed?

Trouts: We’re moving into fall and when it comes to fly-fishing, this season goes hand in hand with the Brown Trout spawn. Moreover, your home waters of the Dream Stream are going to attract hundreds of people in the next month or two looking to capitalize on this. With these crowds comes some undoubtedly unethical/questionable behavior. What is the biggest annoyance/activity you continually see people do during this busy time on the river? I’m sure you’ve seen it all by now. 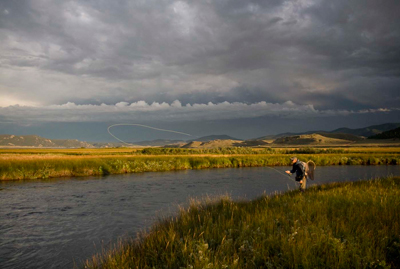 LM: The unethical acts seen every year are: fishing to spawning trout, fowl hooking exposed fish, and walking on redds. I think it is important to remember spawning trout are not feeding trout. They are so intense during the ritual on redds that they are not even concerned about predators from above. Hopefully interview questions like this will help teach anglers who don’t know proper streamside ethics, and change the ways for some who do know.

Trouts: While countless other rivers around the state get a lake run of Brown Trout in the Fall, I think it’s safe to say the Dream Stream gets the lion's share of the pressure and attention. I know this has led many people to say this stretch of the South Platte should be closed during the fall. Where do you stand on this topic?

LM: Instead of closing the whole river, you could close a few sections that are known to host ideal spawning grounds protecting the fish. For example, they practice the same concept on the Yampa River with great success. Some of these gravel areas in mind are only a 100 yards long allowing the remaining river to supply the same great opportunities at large trout while protecting future wild trout populations.

Trouts: What else would you like to tell the angling public about fishing during the fall and taking care of the river and it’s fish during a time that can be very stressful on them?

LM: I concentrate my efforts with clients to deep runs and around structure, clear of cobblestone river bottom and shallow riffled runs. This will prevent interrupting spawning trout. It is also important to try using a no wade policy around riffled runs to prevent stepping on redds and crushing any incubating eggs.

Trouts: You’ve been at this for quite a long time- long before the introduction of Social Media into fly-fishing. The pro’s and con’s of how this reality has impacted our sport are hard to deny. However, you have an Instagram/Facebook, as do I, as does Trouts Fly Fishing, etc. I can also acknowledge Facebook as the sole reason I met one of my personal best fishing buddies many years ago, and I know many other people share similar stories as well. What are your thoughts on how this has impacted the fly-fishing industry- good/bad/both? 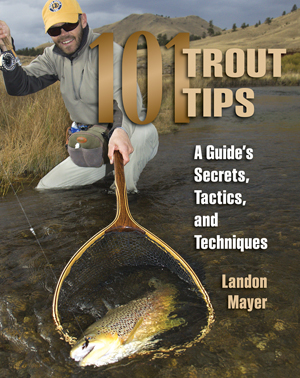 LM: In the past word would spread at a slower pace then now. You had to pay your dues to find great results. Now information and pictures are passed on immediately. The plus side to this is it’s great for business and keeping in touch with so many at one time. The downside can be pressure on locations during peak times throughout the year. I think it is important to follow the same technique used by so many great journalists in the past like Charlie Meyers. Charlie would not hold back information about good fishing, instead he would wait a week or two to pass in the info and do it in a realistic approach. If someone caught one big fish he would note that but also make sure the reader knew it was only one and not every angler was experiencing the same. This gave hope to many while also preventing a mad rush of anglers to the water.

Trouts: Alright, enough with the serious stuff- What’s the best piece of fishing advice you’ve ever been given?

LM: Ha, Ha, Ha, I have to laugh because I will never forget this moment. My first year of guiding I was to truly honored to be around Ed Engle after following his wonderful publications and books over the years. I asked him “Ed, if you can give me one piece of advice for guiding, what would it be? He followed, “Well, if you like to fish don’t guide!” I was blown away. While it was all in fun, there is truth behind it. You need to have the patience of a saint, personality during the good and bad while knowing how and when to give knowledge to others. Yes, there are times when you wish you could grab the rod and catch the fish. But the true challenge is getting someone else to perform as you would in that moment on the river.

Trouts: If you were only allowed to fish one fly in the state of Colorado for the next 365 days, what would it be and why? 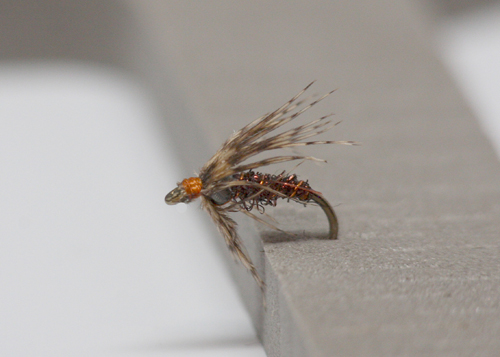 LM: If where choosing one fly for nymphing it would be a #18 Red Copper John, but since I would need to use the fly when dries, nymphs, and streamers might be the best approach: it would be a # 18 Soft Hackle Pheasant Tail. Here’s why: If I were dealing with rising trout I could grease the leader and tippet and shake the pheasant tail dry to drift it in the film. This could mimic an emerging adult that is stuck in the shuck. For nymphing attach it as a trailing fly drifting and breathing in the middle water column triggering a strike. Lastly, if the streamer bite is on I could at least swing the nymph causing it to pulsate and move through a run triggering a reaction strike from the aggressive trout.

Trouts: Got any fun fishing trips on the books?

LM: Yes indeed, this winter I will be targeting Lahontan Cutthroat at Pyramid Lake, and Red Fish in Louisiana. These winter trips help reduce cabin fever and keep the vibe alive!:)

Trouts: Lastly, while most people know you as a very successful fly fishing guide, author, lecturer, etc; what else would you like people know about Landon Mayer?

LM: Hold on, I have to wait for my wife to leave the room. Ok, secretly I to have a crush on Ronda Rousey, ha, ha;) On a serious note my two proudest moments was becoming a father and husband. Behind many successful men is a very strong woman and my children remind me that the simple moments in life are the ones that last forever.