KISS on the Green 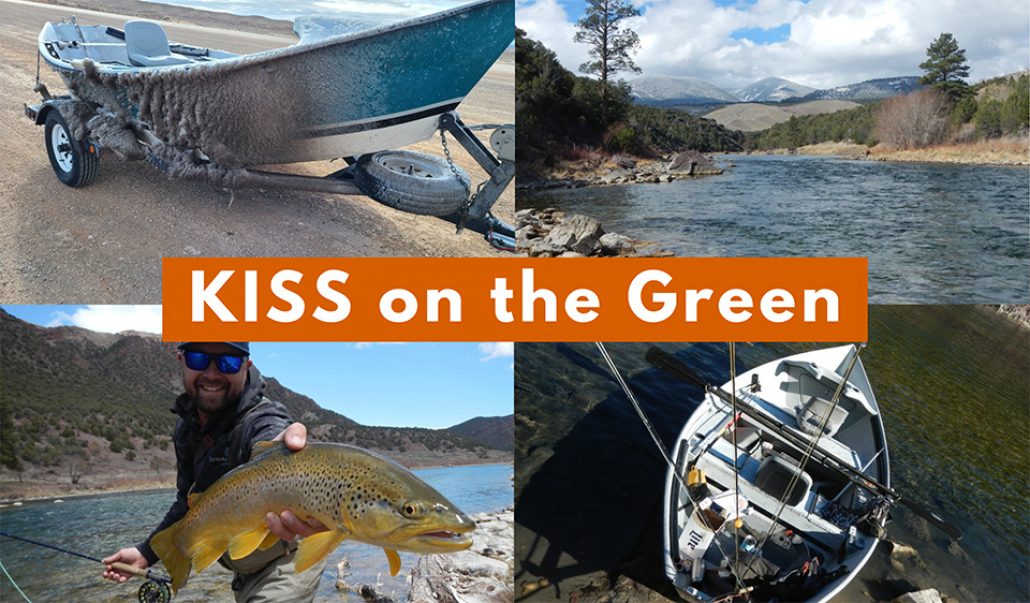 But as things often happen here during the spring months in Colorado, even the best-laid plans can go awry. The first monkey wrench came in the form of a spring snowstorm that promptly closed some of the more efficient routes to the Green River. What was supposed to be a roughly six-hour drive from Denver to the banks of the Green near Dutch John, was basically shut down due to road closures on I-80 and other more rural routes.

After contemplating alternative destinations and fisheries, we decided to stay the course and bunk up with friends who lived about halfway between Denver and the Green. The revised plan was to take off the next morning at oh-dark-thirty. We’d have plenty of time to make it before the blue-winged olive hatch/explosion that we had heard recent rumblings about.

What we failed to consider that along the way our boat would freeze. That morning we had to make a pit stop at a car wash to power blast the snow and ice from the dory. But, after 30 minutes and mountain of quarters, we were back on the road and still confident our plans would not be hampered.

When we finally arrived at the put-in and hopped out of the truck the proverbial monkey decided to throw another wrench. Although the power washing of the boat removed most of the ice and snow, some had remained. It looked like it melted on part of the ride through the desert and then froze again as we climbed in elevation. There was about an inch of solid ice covering the interior of our drift boat.

So, chip the ice we did. After another thirty-minute game delay we pushed off in the Green River for a three-day float and walk/wade fishing adventure.

About the Green River

It’s been quite a while since I fished the Green River – and it was certainly nice to return. The section of the Green we fished are directly below the Flaming Gorge Dam. The Green is a big river stretching over 700 miles and weaves its way from Wyoming, Utah and Colorado before it meets the Colorado River. The river below the dam is broken into three distinct sections:

In the sections we fished (A and B), this river is known for really clear water, a very dense fish-per-river-mile count, spectacular canyon views and a proliferation of wildlife along the banks. In addition to float fishing from a raft or dory, there are other ample options to hike into different sections on foot.

From the moment we pushed off to when we pulled the boat from the take-out, the views and looming red rock canyons that towered above us were outstanding.

I was lucky enough to be invited on the trip by a crew of seasoned anglers who had fished the Green on a number of occasions and who had a well-thought-out plan. We’d float the A section on day one and set up camp at the top of the B section. On day two, we simply took our boat from the camp side of the river to the opposite bank, dropped the anchor, and spent the remainder of the day walking, wading, and casting. On day three we’d break down camp and float the remaining miles of the B section.

Another trip highlight: just sitting around a roaring campfire again. It’s been too long.

Over the course of our three days we caught fish using a number of different methods. I was expecting a lot of rainbows but turned out that we saw more brown trout on this trip. The blue-winged olive hatch that occurred mid-day was the main event. We were able to pick off fish in very technical soft water flats where presentations had to be just about perfect – or you’d put the fish down. We also picked up fish on dry-dropper rigs and a few in very deep runs using a standard two fly nymph rig with split shot to get the bugs down fast. The streamer bite was surprisingly slow but I was able to experience a fantastic grab by a 17” brown that ate a black leech pattern on the swing using a two-handed switch rod – for me that was a day maker.

The peak of the trip came on day three when we found a pod of fish feeding hard in a very fast-moving deep riffle. The fish would reveal themselves by rolling on the surface to eat BWOs – then it was all about head hunting with a single dry sized 18-20. To be successful we had to wade waist deep and make accurate casts. When the stars did align and we’d get a brown to eat, the battles were epic – with some fish coming to hand but many others lost due to a violent head shake or downstream run in strong current.

Funny but not funny, while wading deep in that fast run I was also unpleasantly reminded of a small tear very high up on the right leg of my waders that I’ve neglected to repair. The Green River soaked my underwear all the way down to my sock.

As far as gear goes, I used a 4wt rod with a floating line for the technical sections where we were fishing for rising trout in very skinny water. For the streamer fishing, we used a 6wt with a sinking tip to get the fly down, especially in the deeper “tanks” where we could see fish holding. When we were dredging deeper runs we used a standard two-fly nymph rig with plenty of split shot and an indicator.

From a fly selection standpoint, I deployed my version of the KISS strategy: Keep It Stupidly Simple. My most productive pattern was a good ol’ Parachute Adams in sizes 18-22. Most of the fish I picked up subsurface were on a size 18 Pearl Rainbow Warrior. Not surprisingly, your standard issue pink worm also seemed to be popular fare with the toothy browns. As we’ve talked about in our fishing reports and our recent podcasts, presentation seemed to trump specific patterns once again. Keeping it stupidly simple and using patterns that I had high confidence in really seemed to get the job done.

There are a number of routes you can choose from Denver to reach the A, B and C sections of the Green River below the Flaming Gorge Reservoir. Plan on a six to seven-hour drive if you are lucky enough to have clear driving conditions. If you haven’t experienced the Green on foot or by boat, it should be a river that is on your list to simply explore – and have fun.