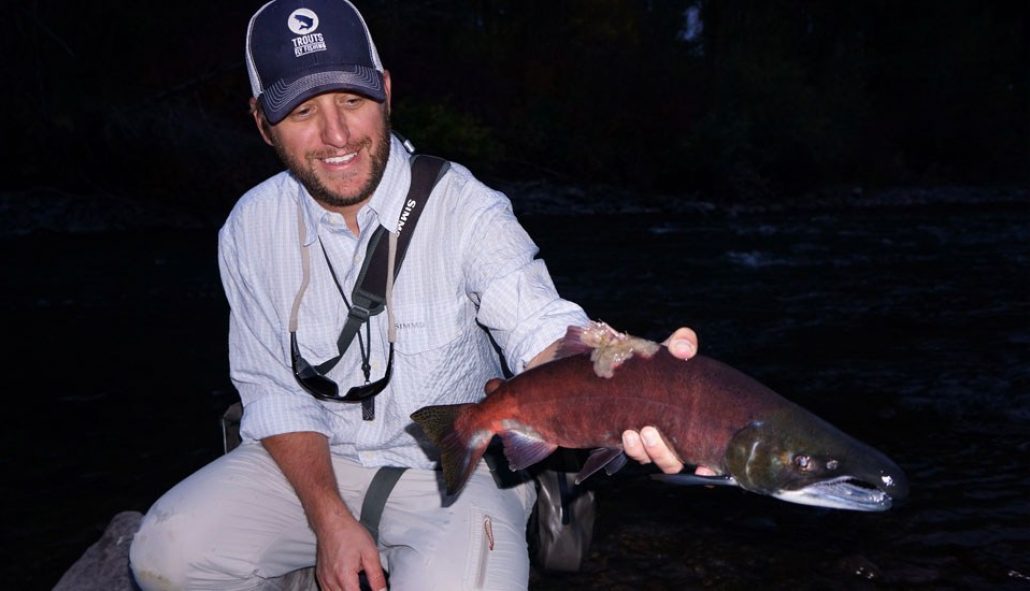 Salmon fishing in Colorado? You betcha! Colorado is fortunate enough to have a healthy population of Kokanee Salmon swimming in many reservoirs throughout the state. Blue Mesa Reservoir near Gunnison, as well as Elevenmile Reservoir in South Park are definitely two of the most popular locations to target these fall-run fish. Blue Mesa also holds the largest population of Kokanee in the United States. If you’ve ever been interested in catching them on the fly, all I can say is head to the river. The time is now!

To give a little background information on these fish, Kokanee Salmon are simply a landlocked version of the well-known Sockeye Salmon. Sockeye spend their first few years of life in the ocean. Kokanee spend their first few years in a reservoir. Once Fall arrives, both return to the river they were born in to spawn, and shortly thereafter, die. Both fish will be a silver color while spending time their respective ocean or reservoir. It is once they begin the migration to a river system that they take on the appearance most people are familiar with- physically changing color and shape. Kokanee will turn bright red with a green colored head. The males will also develop a noticeably humped back and a very pronounced snout with sharp teeth. The shape of their jaw, as well as very pronounced teeth are used as a weapon for fighting (with regards to the spawn), as opposed to for feeding reasons.

But now on to the good stuff….how to catch one. Kokanee Salmon don’t feed once they reach moving water. They have other, more important things on their mind. The way to catch them then is to play into the aggression and territorialism that they develop come spawning time. Male Salmon breed in a hierarchical order, in which some males will assume a “dominate” role and others, a “subordinate” role. Dominant males will fight off subordinate males for breeding rights and locations. Female Kokanee can also exhibit aggressive behavior by chasing off other females, as well as subordinate males, who encroach on their chosen spawning location- called a redd. After breeding takes place, females will continue to display aggressive behavior in protecting their eggs from intruders. Males will not protect eggs and instead move on to find another female.

From a fly perspective, given the fact that they aren’t looking for food, you’re goal needs to be to literally “annoy” the fish. Getting a fish to strike out of reaction/aggression will be your key to success. I’d say the four most popular flies for this are Girdle Bugs, San Juan Worms, Eggs, and big, flashy Beadhead Nymphs. For the Nymphs and San Juan Worms, I personally like to use red. Seeing as how the competition (i.e. Male Kokanee) are bright red, I am of the opinion that red of anything will only add to hopefully being viewed as a threat. Girdle Bugs can also be effective. I think the fish view them as some strange, multi-legged, fairly decent sized critter that might come try and eat their eggs. Finally, Egg patterns can be very effective (and are probably the most popular fly to use) because they also will be viewed as a threat. Breeding Kokanee, particularly females, have the survival of their own eggs as top priority. Any other eggs in the river system could be viewed as competition and thus will often get eaten. If you’re out fishing for Kokanee, there’s no right or wrong way to approach the fly selection. I’d fish a two fly rig and rotate through flies until you find a combination that gets results. The biggest key, no matter which flies you fish, will be getting them down on the bottom. Adjusting your indicator depth and weight until you’re able to tick the bottom with regularity will be key. No matter which fly you choose to fish, it will be viewed as much more threatening down on the bottom near the Kokanee’s eggs, as opposed to drifting through the middle of the water column. 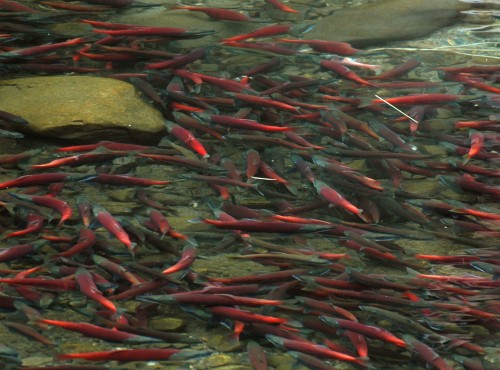 Perhaps the biggest challenge in all of Kokanee fishing is simply finding them. Be sure to cover water and check with local resources as to where the fish are being found in a river system. Seeing as how they are migratory, it can be a “here today, gone tomorrow” type of fishing some days. From a tackle perspective, I typically stick with a 6 or 7 weight rod. Kokanee are tough fish and require a good hookset. Fishing a heavier rod with some back bone will only help the cause. Lastly, leave the light tippet at home. 2x or 3x tippet should be sufficient for targeting Kokanee.

Hopefully this article has shed some light on how to fish for Kokanee with a fly. If you've never tried Salmon fishing before and want to give it a go, the closest place to fish them from Denver is the Dream Stream. Seeing as how this stretch of river is only 4 miles long, they're usually fairly easy to locate. As always, good luck out there and let us know if there's anything else we can help with!