All Photos and Video by Alex Landeen

As a young man, the memory that resonates strongest from my first few elk hunting trips with my dad is the transition from an insufferable, agonizing wait, to an immediate and extreme adrenaline rush. Hours of wandering thoughts and delusions of grandeur switch instantly to cold sweats and uncontrollable shaking as your target enters the field of view.

The analogy between big game fly fishing and big game hunting may be a bit tired, but it holds very true. Off the coast of San Diego CA this past weekend, Alex Landeen, Conway Bowman and I saw both extremes of this paradigm, while hunting for one of the most aggressive predators in the sea with fly rods. 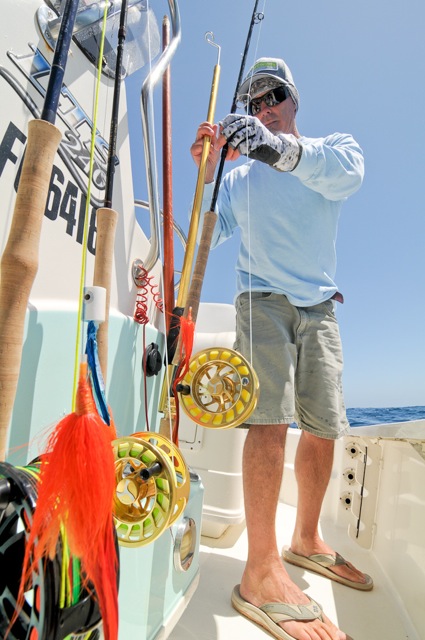 Alex was not feeling well, he had swollen tonsils and waves of chills that hinted at strep throat. He pushed forward anyway, and we headed six plus miles out into the open ocean with our Captain, world renowned angler, author and TV personality, Conway Bowman.

Conway set the Chum slick, and we waited, and waited, and waited. The high seas of the day were wearing on Alex, and save for some great conversation with our Captain, the day moved at a snail’s pace. In an instant this all changed as a 50Lb mako shark popped up right next to the boat. I made the cast, and the fish followed, nosed the 14” Orange Tube Fly, turned, and disappeared into the deep green. This was to be the only excitement for the day. Conway worked extra hard with the teaser, and adjusted the drift regularly, he wanted to get us into fish just as bad as we did. We stayed out a bit longer, but it was obvious my comrade had about all he could take of the unrelenting chop. 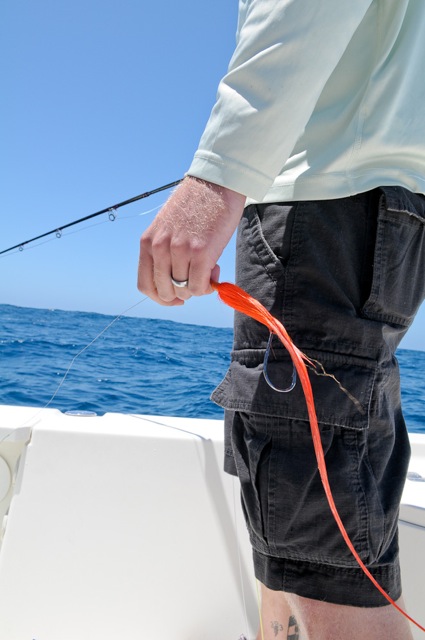 A handful of antibiotics and a very long night sleep gave Alex just enough energy to try it all again, despite the obvious inconvenience of full-blown strep throat. The day started much the same, although we ran a bit farther, had some extra special chum, and the chop was substantially lighter. The drift was set and the wait began.

Two hours in with no fish, Alex grabbed the teaser rod (a spinning rod set up with a hook-less lure), and to defeat the boredom, made a few casts. About the 5th cast in, the silhouette of a 60lb torpedo of muscle and teeth appeared behind the plastic orange squid. The teaser was pulled, the cast was made.

In an instant, 90ft of fly line and 150 yards of backing were missing from my Orvis Mirage Reel.

An all out tug of war ensued, the upper hand shifted intermittently, but the fish held it for most of the time. Our Captain grabbed the leader, and although he had done this more than a few times, it was clear these were not his favorite moments. I pet my first mako on the fly on the top of his head, Conway popped the hook, and the rush was over.

The distance between peaks was never too long the rest of the afternoon, as fish continued to appear, and eagerly eat flies. We bent Orvis Helios 2 14wts in ways they were not designed to be bent, and brought numerous fish over 100lbs to the boat. At one point in the afternoon, we tried to maintain our sanity as Alex hooked up with a very large blue shark at the bow and I was into a very large mako at the stern, and a pod of dolphins began to porpoise all around, some within a few feet of the boat. Our phenomenal captain guided both anglers through their individual fight, and both fish released safely with no injuries or broken gear. 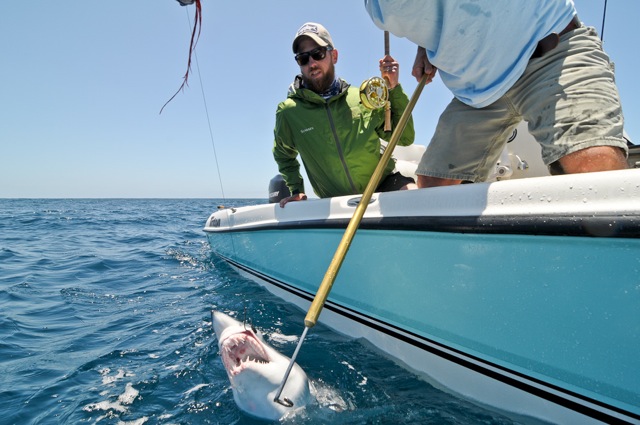 The thrill of targeting the ocean’s apex predator on a fly rod is one I will not soon forget. Conway Bowman is a top tier guide, and is willing to work as hard as it takes to make things come together for his clients, and is an equally good storyteller, making the down time a bit more bearable for when things don’t . The very talented Alex Landeen pushed forward, when most would have thrown in the towel, and produced some pretty amazing photos and video. These fish are truly worth the wait.

If you want to check out Alex's report make the jump and visit the always entertaining fatguyflyfishing.blogspot.com. Trouts Fly Fishing would like to throw a big thanks out to Alex for flexing his photography muscles and capturing all of this mako madness on digital film and video. Alex, once again, proves that he has the photography skillz to pay the billz.

If you have any questions about how the Helios II 14 wt. or the Orvis Mirage performed in this big game environment stop in the shop or give us a call - 303.733.1434. We're happy to give you a full run down. Keep your eyes out for a detailed gear review on both of these Orvis products later in the summer.