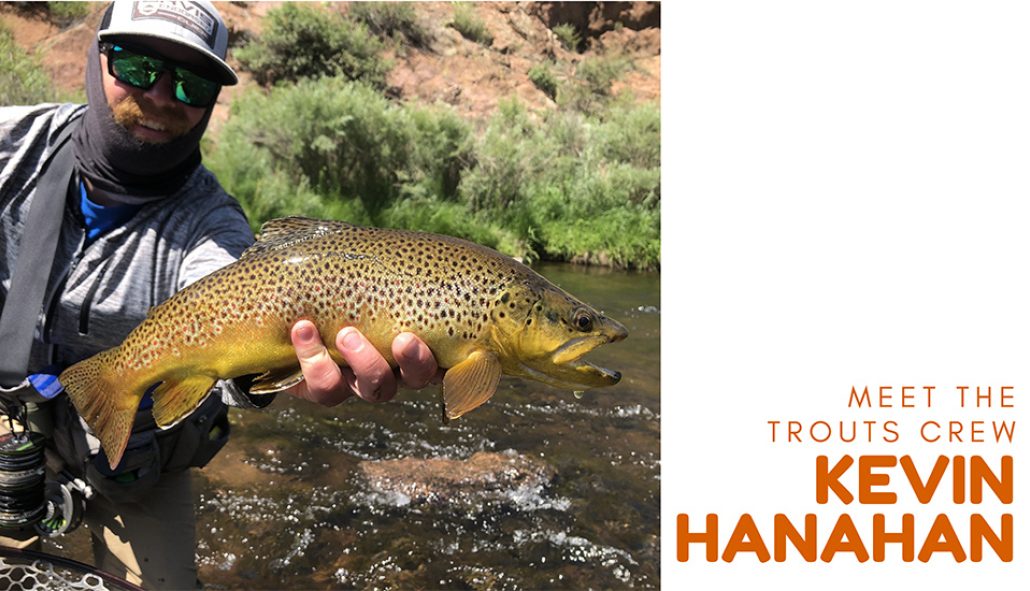 With summer around the corner, there are a couple of new faces around the Denver shop. With that in mind, we'd like to "introduce" Kevin Hanahan. Kevin isn't a new face around Trouts, he's been guiding and working out of the Frisco shop for a couple of years. This spring he made the switch down here to the Front Range and is manning the fly shop floor down here in Denver these days.

With all that in mind, we wanted to give you the opportunity to get to know Kevin. Without further adieu, let's see what makes Kevin tick on the water.

Trouts: Let's start this from the top- how did you get your start fly-fishing and what keeps you heading back to the river every chance you get?

KH: I picked up fly fishing regularly after moving to Colorado. I had dabbled a few times before, but my friend Max and I decided to jump in with both feet and really got into it together. As with most people, it was a slow start with few fish and lots of frustration. In the end I think that's what keeps the motivation up though, leaving defeated, figuring out what you did wrong, and then coming back to put a few in the bag. Besides that, even when the fishing isn't great, standing in the water in the mountains is a pretty decent way to spend a day.

Trouts: Describe your perfect day on the water?

KH: A perfect day on the water would be waking up super early with breakfast and coffee already set to go, getting to the water before anyone else gets there, and just being out with a couple friends for the day. Preferably no one has work the next day either since I usually like to play "one more cast" about 40 or 50 times. I really like to explore new places and learn something every time I go out as well. I've been lucky to work and hang with some pretty stellar fishermen so I always try and pick up something from everyone each time I'm out there. Catching the most fish for the day is helpful too even though it doesn't happen often.

Trouts: If you could only fish one fly in Colorado for the next 365 days, what would it be and why?

KH: If I have to pick one fly to catch fish on I guess it would probably be an RS2, but catching fish aside, my favorite fly to get an eat on is a Chubby hands down.

KH: Fishing in Yellowstone might be my favorite just because of how beautiful it is up there. Every single place you fish could be postcard worthy.

KH: As of right now it's probably the Eagle River.

Trouts: Destination to dream about?

KH: I have had Alaska on my bucket list since I was a kid and still have not made it out there. I think that would probably be number one. I also got to spend some time in Costa Rica and did some fishing there but would love to explore that country some more as well.

Trouts: What is the best piece of fishing advice you've ever been given?

KH: Keep it simple! I think we overcomplicate everything in this sport and everyone has their own opinion on what works and what doesn't. Fish have to eat one way or another, so if what you're doing isn't working, switch it up until you figure out what they want.

Trouts: When not fishing, what are we most likely to find you doing?

KH: Camping, snowboarding, biking, rock climbing, or archery I guess but I'm usually up for just about anything. I hate saying that I can't do something so I try it all.