My 5 Step Strategy For Covering Water 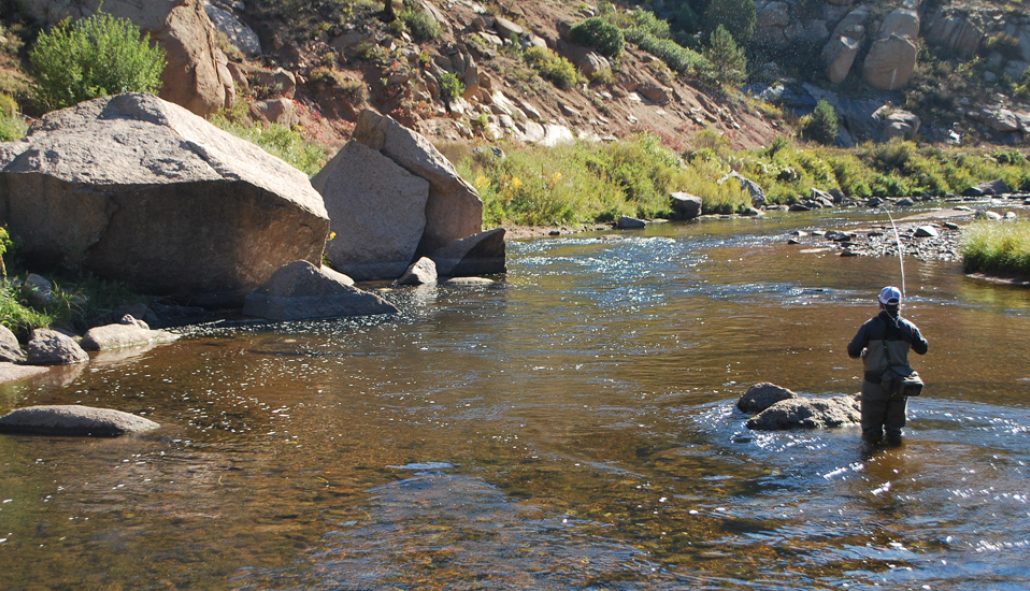 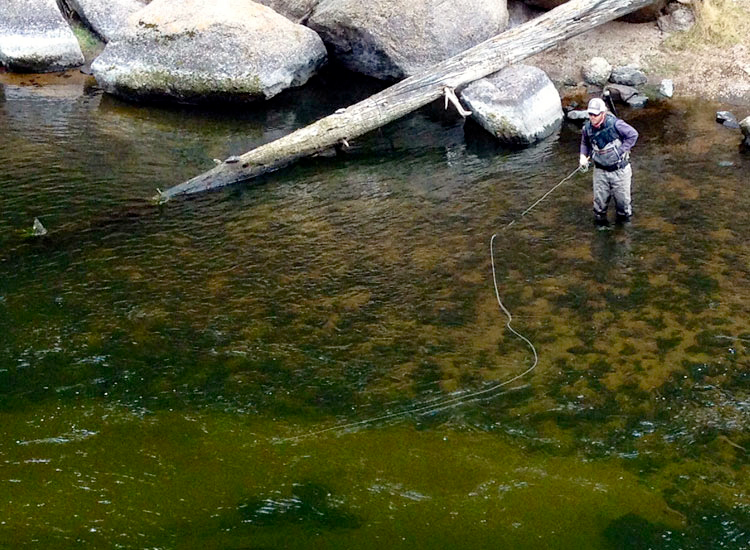 1. Watch Your Watch- This is one of my favorite tactics to employ when the fishing is tough or I'm trying to get the fish dialed in that day. If you've ever been on a guided trip with me, you've likely done quite a bit of walking. It drives me crazy when I see people 'hole sitting' on an area for an hour or two (and I've seen it go on for longer than this). If I were to make a general 'rule' about it, there's never a reason to spend more than 15 minutes in a single spot. Remember now, we're looking for actively feeding fish while we're out there and it's generally not going to take an active fish more than 15 minutes to bite your fly. It's usually only going to take a few drifts if you make a proper presentation. The reason for my 15 minute rule then goes back to my shoebox analogy that I like to use for any technical tailwater- particularly the South Platte. I like to think of trout in this river living in a shoebox. i.e. if you put a trout in a shoebox, it's not going to have a lot of room on either side. If my flies aren't in this 'shoebox zone' of their face, I really don't expect that fish to eat my fly. Now I'm not saying I've never seen a trout turn and chase a size 20 midge down river, but this isn't the norm. Most Colorado tailwater trout have an overabundance of food due to these things call dams. They essentially live in a climate controlled environment that doubles as a grocery store. Think of it this way, would you chase down a Dorito that's 5 feet away when you know 20 more Doritos are going to be passing by very soon less than 5 inches away? Keep an eye on your watch so that you've know how long you've been in a single spot, and then move on to the next. Most likely, you'll always be able to thoroughly work a given spot within 15 minutes.

2. Look First. Cast Second- Now raise your right hand and repeat after me. "I will not walk up to the river and walk out into it" "I will not walk up to the river and walk out into it". Remember how we said earlier that feeding fish are oftentimes shallow fish? I can't tell you how many times I see people stroll up to the river and walk right on in without taking a moment to look around first. Many of our rivers around here (i.e. and most tailwaters in general) offer great sight fishing opportunities. If you're not making it a goal to constantly improve your sight fishing game, you're missing out on A LOT of fish...and some really big ones too. And while I could go on forever about sight fishing, I'll exercise some self control and hold off for now. The point is however, make it a habit to spend at least 15-30 seconds (and oftentimes I'll spend a full minute or two) studying the water before stepping into it. If you've never done this before, I guarantee you'll be shocked at how many fish you start to see right there at your feet. I always say- and I firmly believe- that on the South Platte for instance, the majority of people are standing right where they should be fishing! 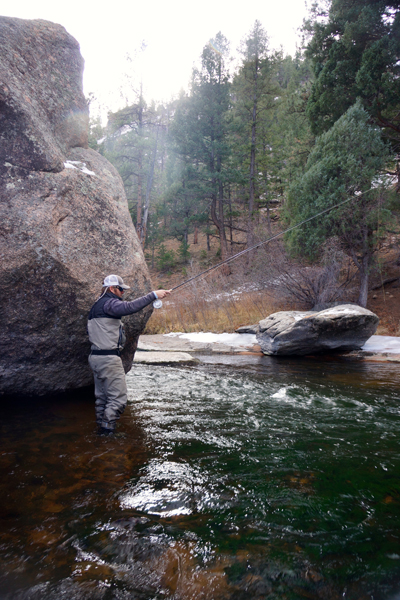 3 . Focus On The Feeders- If you haven't heard me say it by now, the only reason would be that you don't pay attention to this Blog. Focus on Feeding Fish. Like I mentioned in the point above, feeding fish are actively doing that- feeding. Where do fish like to feed? Most often it's going to be in the shallow parts of the river. Riffles, shallow buckets, rock gardens and shelves are all going to cover your base on this. Now I know what some of you are thinking, and yes I've caught fish out of the big, deep green holes also. If you happen by one of these, definitely make a few casts in there. If you catch a fish right away, cast right back in there! There are definitely times where these spots will produce, however I have not personally found them to be the most consistent locations on the river from a day-in and day-out perspective. Look for those shallower zones with 'walking speed water' (and ideally a few bubbles on the surface) and Congratulations, you just found some fish. Hit these spots thoroughly and move on to the next similar location. Sure there will always be some feeding fish in the deep water, but there will also be some pretty inactive ones. These shallower zones may not be holding as many fish as the deeper ones, but they are going to be holding a higher concentration of feeding fish, and they're going to be much easier to cover thoroughly. (Remember that shoebox example?)

4. Just Scooby-Do It- Remember the cartoon Scooby Do? Do you remember how the bad guy always used to operate? If not here's a refresher- the group would be walking along in a line and the bad guy would come grab the last person in line. This action would typically go unnoticed by the rest of the group. What do you think would have happened though if the bad guy came and grabbed the first person in line? Hopefully you're starting to see my point. It can definitely take some self control when you see a really good looking spot that you just KNOW is holding fish. At all costs, don't just rush in and start fishing the prime spot in the run (we'll call it the 'A' water). Spend a moment and look for the 'B' and 'C' water- water that isn't a total waste of your time, but is still half way decent. I can't tell you how many times I've managed to catch a fish or two (or more) out of these smaller surrounding areas, all while leaving the 'A' water completely untouched. Once I've fished all this perimeter water (which sometimes won't produce fish, and that's okay too, at least you checked!) then I'll move in and fish the prime stuff. This tactic works great whether you're fishing with dry flies or nymphs. 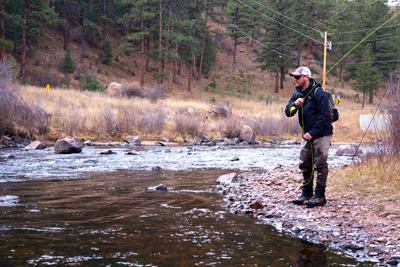 5. Go With The Grid- So now that we've arrived at a likely looking spot and we know we're going to work it efficiently (step 1), we've determined there are no fish in our immediate area to fish to (step 2), we're going to focus on the areas most likely to hold feeding fish (step 3), we know we're going to work the 'C' and 'B' water before moving into the 'A' water (step 4), we now need to address step 5. No matter what water you are working, if you're not directly sight fishing to a particular fish, then I encourage you to follow this final suggestion. At all costs don't just haphazzardly cast away hoping for a bite. Picture a grid laying across the run with each 'column' being about the width of a shoebox. Depending on your determination of the fishes' eagerness to eat that day, chose a number (I usually do 5 to 10. If the fish are super agressive I may only do 2 or 3, if they're sluggish- such as in the winter- I may do more) and make this number of casts through column 1 (which will be on the perimeter edge), after making 'X' number of casts through the exact same water, move your next cast 1 foot over and repeat, after making 'X' number of casts through column 2, move your next cast 1 foot over and repeat....by utilizing this very systematic method to work through a run you will know exactly when you have covered it thoroughly and be able to better determine whether you should A) move on to a next spot or B) work through the run again.

I can say with certainty, putting together and executing a plan for covering water will without a doubt lead to more fish in the net for you. While it may leave you walking away from your favorite ol' reliable deep hole quicker than usual, it will end up putting your flies in front of more feeding fish throughout the day. I wish I had a dollar for every time a customer on a guided trip said something along the lines of "I can't believe we just caught a fish out of there. I would have just walked right past that (and often through that) to get to the deeper stuff". Just remember, feeding fish are usually shallow fish. Shallow fish are usually happy fish.....and happy fish are always going to be the easiest to catch!