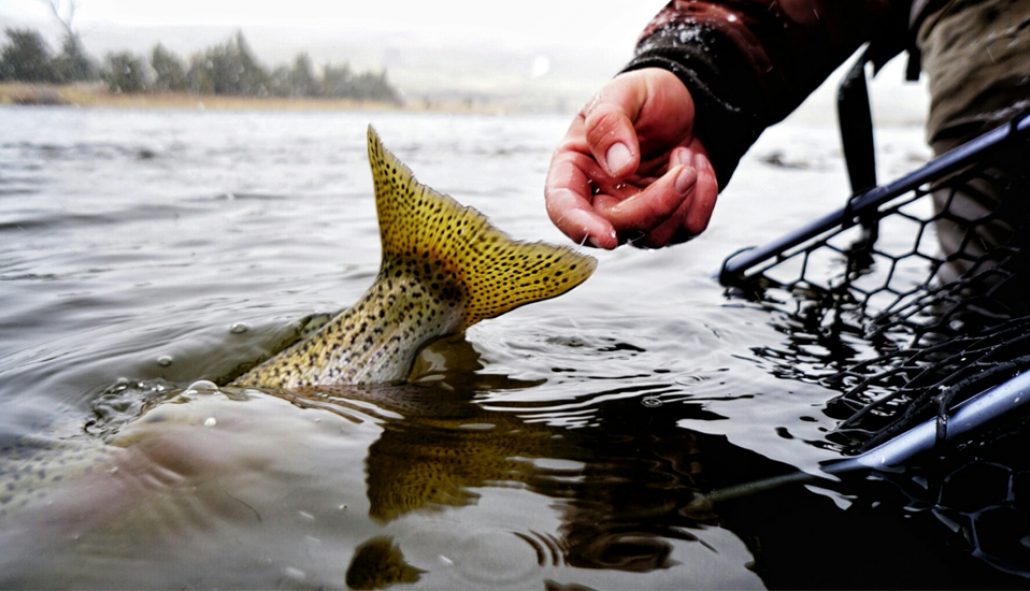 It is very humbling and rewarding to know that what I’m doing inspires peers within the sport of fly fishing. However, when I receive these messages I generally think to myself, “If they only knew.” Fly fishing is my life passion but, giving your life to the sport really gets in the way of many other things. I am a terrible employee, awful boyfriend and above all poor. However, if you can get past not having a 401k and are ok living in a studio apartment where dirty clothes pile up, you might find the rewards of this lifestyle are better than any material object money can buy. Thankfully I have a group of friends that share my passion and are nearly as crazy as myself. With it now being summer chasing trout is easy, it means tossing big dries to eager trout, wet wading, sleeping next to the fire in camp. Hell, the only obstacle is figuring out how to keep the beer cold all day. As much as I love summer days, for some reason I yearn for tougher days. Days when things can be unpredictable and when as an angler you have to decide, “Is this really worth it?” This past Fall I made a trip North with three of my good buddies, Phil, Denis and Ivan. Things got a little interesting to say the least. It was the second week of November. The four of us had planned on making a three day trip north to one of our favorite rivers. We planned the trip for mid-week so the possibility of crowds would be less.

As we discussed the final details that Monday night before heading out Tuesday we all laughed because the weather forecast called for strong winds and snow. That is nothing new for this area so the idea of bailing never crossed our minds. There is one thing I’ve learned as an angler; there is always going to be weather so you just have to be prepared and deal with it. Besides, if we got snowed in all that really means is we get to fish for another day or two. We all know fishing is better with beer so I told everyone I’d grab two more cases just in case it really snowed as much as the weather man predicted. The alarm clock sounded bright and early Tuesday morning and we hit the road. We took two cars and I piled in with Phil. On these road trips Phil usually has the role of lead car because he has a knack for turning a seven hour car ride into five. The drive is was painless and as we pulled onto the final dirt road there wasn’t a car in a single pull off. Even better than that, the weather man was wrong.

We made camp underneath clear blue skies. With camp setup the next step was rushing to get rigged up, a leech, scud and copper john was my go to. As we spread out across our camp run, indicators began to go under nearly every cast. I could tell you how the size of some of the fish being landed but, you probably wouldn’t believe me anyways. While fishing was lights out the typical obstacles of breaking off, getting tangled and the beer in our packs only getting warmer arose. It’s these breaks that allow you to enjoy each other’s company -or for us- heckle the guys still fishing. Beer and trout owned the remainder of the day. As the first day came to an end we headed back to camp to enjoy some of Chef Denis’ homemade brisket sandwiches. With a fire burning, we all shared pictures and laughs until the early morning Wednesday. I woke up the next morning with a headache only powdered sugar doughnuts and ice cold PBR could fix. The only obstacle that morning was unfreezing our waders in the car.

It was another perfect day with a slight breeze but, for a place where 40 MPH winds are a regular we couldn’t complain. Fishing that day resembled Tuesday so I won’t bore you with any more details. At camp that night we discussed how lucky we were to have such great weather. The typical campfire discussion of how fast the last few days went by and how good fishing had been took place before we called it a night.

Thursday morning is when the weather finally showed up. We saw the storm rolling in so we decided we should only fish for a few hours before we hit the road back home. As the snow started to fall, fishing continued to be good. Denis hooked onto something of size that gave him a good ride before it finally broke him off. I heckled him for losing that fish but, what happened next only added insult to injury. As he sat down to retie his flies on I stepped into his run as only a true friend would do. After a few minutes my indicator did a dance and I set the hook. A solid fight followed and as I got the fish to the net I told Denis in my best Charlie Daniels voice, “That’s how you do it son!” The best part about it was Denis’ three fly rig was hanging from the mouth of what may have been the prettiest rainbow of the trip. Needless to say Denis had some choice words for me as I offered to give him back his flies. With the snow beginning to stick we decided to call it a day. As we made our way out on the dirt road back to the highway the weather worsened tenfold. Phil and I joked about how long the ride home was going to be. When the wind finally showed up it was almost white out conditions. If you have ever driven on I80 during a snow storm then you understand how bad it can be. We made our way back to town and noticed the “Highway Closed” lights were flashing but, the gate wasn’t down. I looked at Phil and we both kind of grinned. The decision was made to give it a go so I stuck my arm out the window to wave Denis and Ivan on behind us. The next fifty miles of highway took us about three hours as we crept along around blown over semis following one road marker at a time. To this day I’m still not sure if we were supposed to be on that road but, I’ll tell you this, there was a line of cars about two miles long waiting for the highway to reopen when we got back to Laramie. To this day we still debate if what we did that day was stupid or tough.

However, the fishing those three days was more than worth it and thankfully, I’ve got friends who will do it all over again with me this winter. 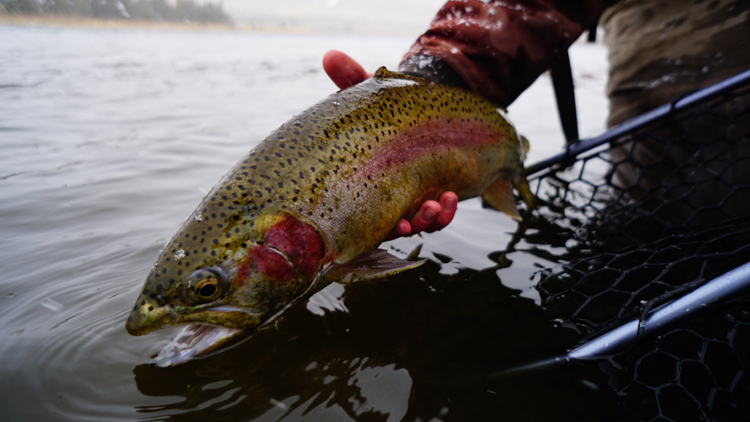