Winter fly fishing in Colorado is always an experience.

But this year - things are different.

“I’ve had colder days out here in October,” said Reid Baker of Freestone Outfitters as we lined up our rods on the side of the road. The outdoor thermometer in his Tahoe had read 48 degrees when we pulled onto the shoulder, just a stone’s throw from the river. Standing outside in the sun it felt about sixty five.

I don’t do a ton of winter fly fishing - but I always look forward to it. The number one reason: it is usually so different than fishing in the spring, summer and fall months. The number two reason: there are typically fewer people on what are normally busy sections of river. Number three: the fishing can be lights out. 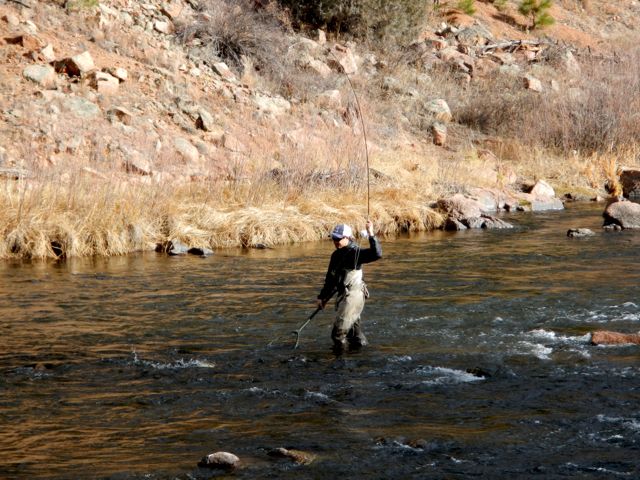 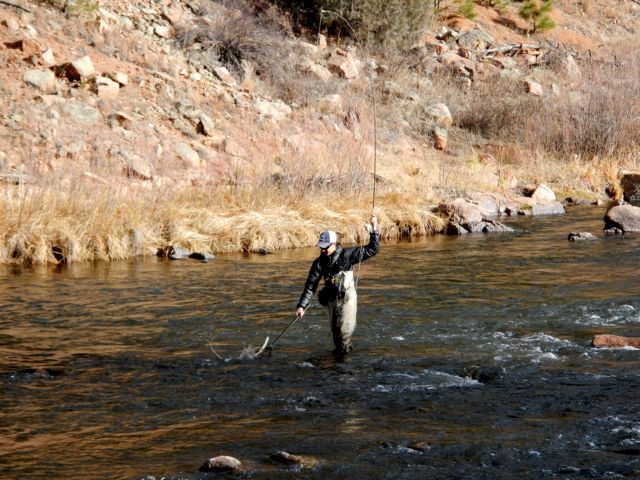 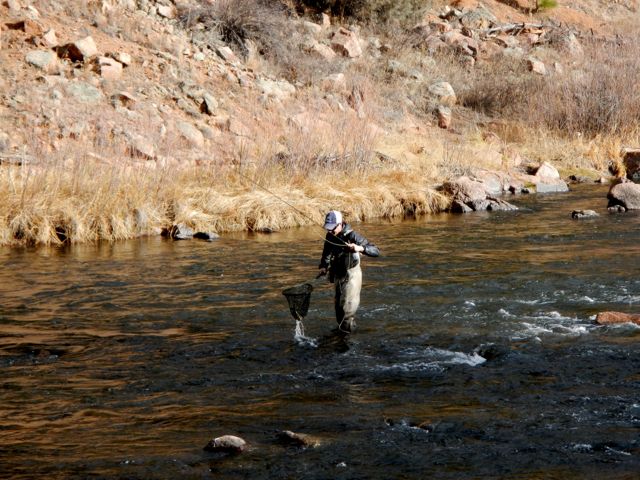 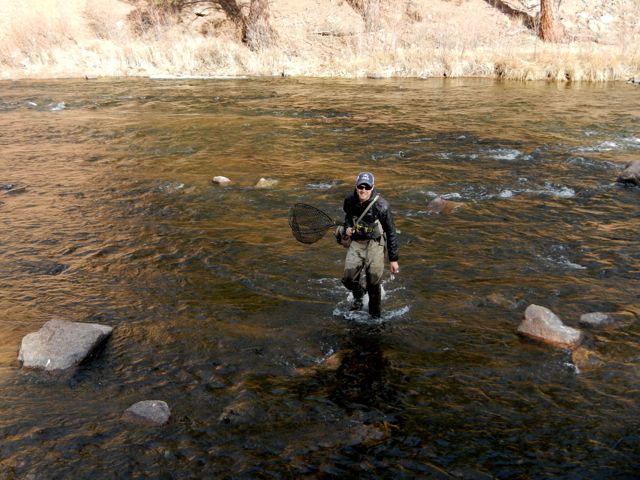 The public sections of the South Platte River from Cheesman Canyon through Deckers to the confluence of the North Fork of the South Platte are go-to waters into the late fall and coldest months of the year. Some sections can fish great straight through the winter into the spring. Cheesman Reservoir provides somewhat regular flows throughout these winter months yielding one of the most productive year round fisheries in the Front Range. This upper Canyon section of the river runs roughly 3.5 miles from Cheesman Dam to the private water boundary at the Wigmam Club.

Lower down, publicly accessible water can be found below in a section generally known a “Deckers.” This section of river roughly flows 20 miles between the town of Deckers and the confluence of the North Fork of the South Platte downstream. This section of river has sizable pieces of public water but tends to freeze over and be less productive in the later, colder months of the winter. That is to say... a normal winter.

We found the water clarity far from clear with flows running around 160 cfs - and rising. Fish could be found in some of the deeper, darker - and most importantly - slower runs. The patterns that yielded results for us were juju baetis (size 20, olive), rojo midge (size 22), and small peach colored egg patterns. We had to probe around a bit, but once we found the fish, they seemed to be pretty well concentrated. Moving upstream, we looked for similar water from a depth and clarity standpoint, and quite often found fish holding. 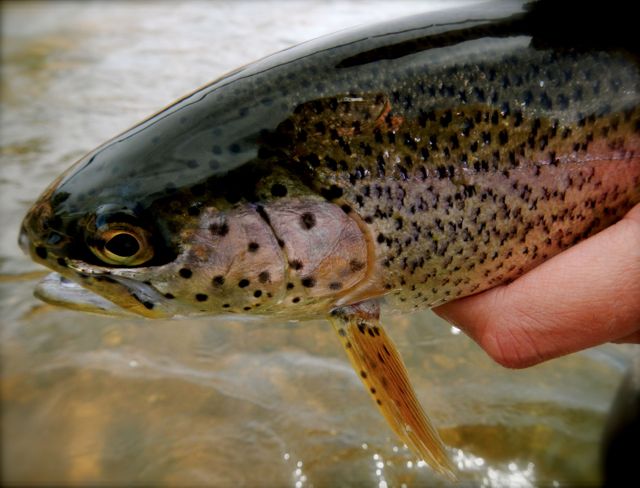 At lunch, we broke out the folding chairs, sat in the sun, and ate fried chicken with our shirtsleeves rolled up. October? It felt like September.

Back on the water, I found myself breaking the river down and finding small pockets of water that fit the early morning bill:

It wasn't about covering massive amounts of water with giant casts, drifts and stack mends - it seemed more about covering the right water. For the different sections we fished, these were smaller pockets. I found myself spending more time than I normally do studying the water speed, trying to estimate depth and evaluating structure.

I was able to sneak out a Sage ONE 4 weight from the shop's arsenal of rental gear. For this type of fishing, it did a lot better than the 4 weight I've been casting all summer and fall. I was able to throw bigger, more powerful and more accurate mends with the ONE. It picked line up off the water with ease and at the end of the day, my shoulder didn't feel like I'd been throwing a football down field all day. 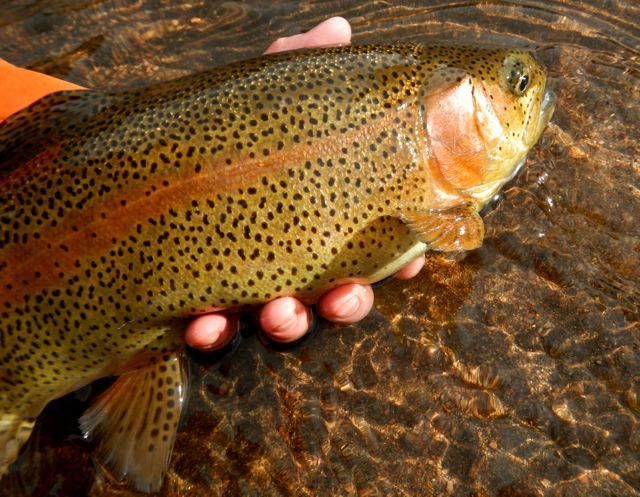 We were hoping for a baetis hatch that was rumored to come off between 1:00pm-3:00pm but not a nose was seen. The bug activity on the surface was minimal. More clouds or an overcast day probably would have helped.

It was not the most technical fishing I’ve encountered in a winter tailwater fishery, but I reminded myself that it was early December and I was not sitting in front of a computer monitor, I didn’t have blocks of ice forming under my vibram soles, and I had yet to pop and ice ball from the eyelets of my rod.

The sun dipped down below the canyon walls later in the afternoon. With no bugs coming off the water that we could see, we rolled up our fly lines and called it a day.

"Man, that was some pretty consistent fishing for December in Colorado," I said to Reid as we climbed a steep sand embankment.

As we reached the top, Reid summed it up.

"That was just a good day of fishing."

How to Get There: to access Cheesman Canyon and the Deckers area from Denver head south on Santa Fe Drive (Highway 85) towards Sedalia. At Sedalia take CR 67 West for 13.3 miles to Sprucewood. You can take road 67 or 40 to access the river. To access Cheesman Canyon from here, take a right turn on 126 at Deckers and continue for 2.5 miles (parking and trailhead on left). 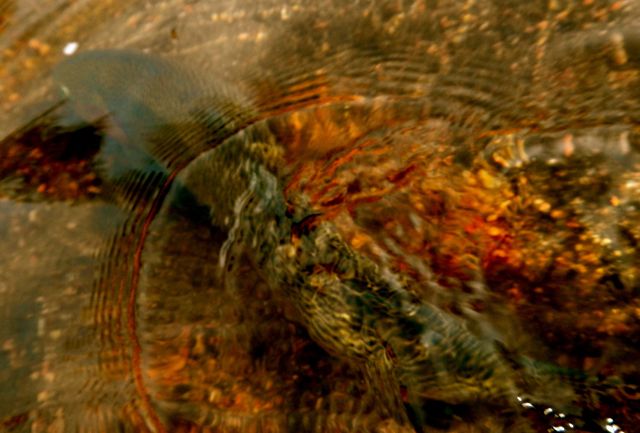