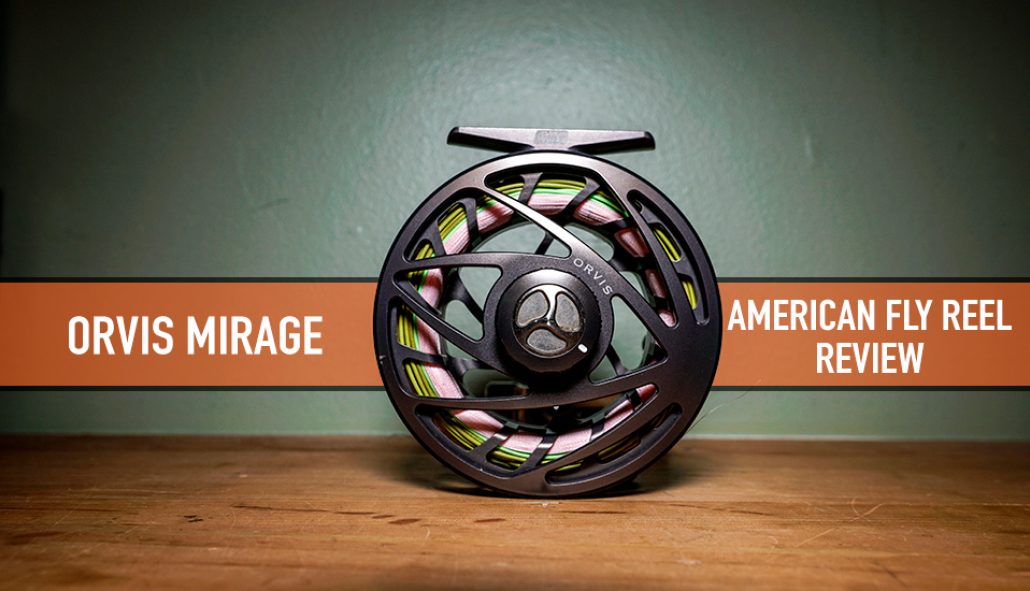 People who know me, know I’m hard on my stuff. Don’t believe me? Here’s old blue, my trusty 2001 Honda Accord. There were a couple dents, dings, bruises, and missing parts, but the engine still purred like a dream when I donated it to charity earlier this year. Many of my old fly reels look very similar to Old Blue after a couple of months of use. Beat up from the feet up, but still mechanically sound.

What if I could have it all though? A reel whose drag system stood the test of time and could deal with the rigors of being my reel? Enter the new Orvis Mirage American fly reel. The Mirage III (best suited for 5 to 7 weights) to be exact. The new, made-in-Vermont, Mirage fly reel boasts some impressive specs including: (1) being machined from strong, yet lightweight 6061 T6 aluminum barstock, (2) finished with Military Spec Type III anodizing, (3) a fully-sealed stacked carbon and stainless drag system, and (4) an aggressive knurled drag knob that goes from zero to full drag in less than a single drag knob rotation.

I can get caught up in the specs just as much as the next guy and these specs are impressive, but how did this reel perform on the water? In short, it exceeded my expectations and is certainly worthy of it’s higher price tag (price from $495 to $850). I didn’t shy away from using this reel, as I would any other. That included carp, pike, and of course, brown and rainbow trout all along the Front Range. That included many a drop from the bed of the truck, toss into a sandy bank, and dunk into a cold trout stream. And of course, that included adjustments on the fly with hard fighting fish on a variety of water and rod types. The reel handled every challenge I threw it’s way with flying colors.

On the water, adjusting drag was a breeze. The drag knob is easily found and adjusted in the heat of battle. With 350 degrees separating zero and full drag, Orvis utilized a ball-and-ramp style drag system that applies pressure along a non-linear plane. That means that there is a quick transition from the protecting the lighter tippets (5 and 6x) to putting the brakes to a brown trying to find protection in the undercut bank.

There was one particular instance when this ability stuck out and separated this reel from others I’ve used in the past. Fishing a small meadow stream earlier this summer, I threw a big meaty Chubby Chernobyl towards a prime looking bank. The foam fly drifted for a couple of seconds and a healthy brown took one look at the Chernobyl and made it disappear. Within milliseconds of hooking the brown, it was determined to get back to the safety of the undercut. My excess line was gone in a flash and the brown was taking line quickly. If the brown made it to the undercut, the chances of landing that fish were pretty slim. For once in my life, I reacted quickly and quickly wrenched down on the drag. I was able to muscle the brown out of the danger zone and into my net. Without the ability to to hammer down on the drag that quickly, I surely would have lost that fish. Points for the Mirage. With 9 discs, 16 drag surfaces, the Mirage III generates a utilitarian 12 pounds of drag pressure. That was more than enough to stop that nice brown and a couple of the South Platte’s finest golden ghosts. Additionally, when tested on more technical waters like Deckers with 5x, the drag system was super smooth and did a stellar job protecting lighter tippets with help from low startup inertia. I found the sound of the drag engaged to be music to my ears and sets itself apart from the sounds of other drag systems in it’s class. Points for the Mirage.

The Military Spec Type III anodizing of the Mirage American Fly Reel impressed me thoroughly. For many years, the Hatch Finatic’s type II anodizing served as the industry standard for finish durability. Move over Hatch because the Mil Spec Type III finish of the Mirage takes the crown. Don’t tell Rick, but I’ve accidentally dropped this reel more times than I would like to admit. It’s been thrown to the bank after landing a fish, dropped in sand, and left unprotected in the bed of my truck for a ride home. What does it have to show for such great treatment, one single minor blemish. The one downside to the Type III anodizing is that this type of finish does limit the number of colors of the Mirage that Orvis can produce. So, if you don’t like the aesthetics of a Pewter or Midnight black reel, than the new Mirage may not be for you. But, for me, after several months of abuse and only one minor blemish to show for it, I’ll take the clean, classic aesthetics of my seemingly unfished Pewter Mirage American fly reel over a bright colored, but dinged up fly reel. Points for the Mirage. The Mirage III, which weighs in at 6.19 ounces, is certainly heavier than some of it’s counterparts. While the reel is rated for 5 through 7 weight lines, I found this reel was best suited for and best balanced my 6 and 7 weights. It was still fishable on the five weight, but fully rigged, the Mirage III added noticeable weight to my five-weight setup. Did this cause strain or stress later in the day, no. But, it was noticeable.

Aside from the Mil Spec anodizing and smooth drag, there are some nice touches that set the Mirage apart from previous generations of fly reels. Specifically, the radiused reel foot. No sharp edges along the reel foot translates no kinked leaders. Additionally, the handle is machined aluminum and has a tremendous premium feel to it. From the design, finish, and drag system, no part of the Mirage feels cheap or overlooked. It is premium through and through. Points for the Mirage.

Combine the smooth sealed drag with a finish that can hold up to the hardest of users and the new Orvis Mirage American fly reel is my go-to reel. It has earned its place attached to my workhorse 6 weight and will remain there for quite sometime. Check out the Mirage American Fly Reel in our online store or come on down to our Denver store to feel greatness for yourself.