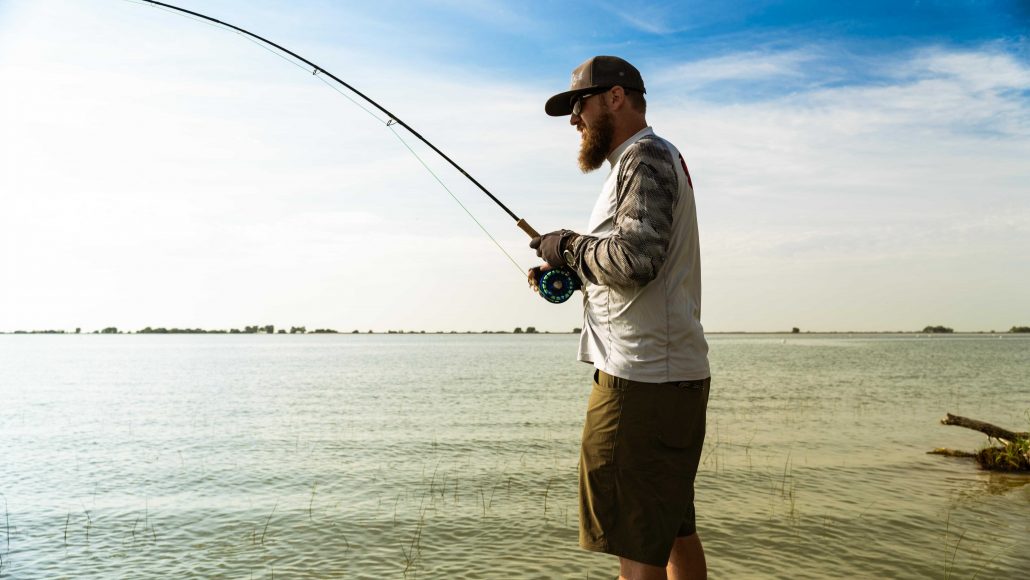 If you've followed our Instagram for long enough, you've surely seen Rick's majestic steed "Two Shades of Grey" a time or three. It's an old, retrofitted 10-foot Buster Boat that Rick has converted into a carp flats fishing killer. He's lovingly christened it, "Two Shades of Grey." An ode to the two stunning shades of plastic used to construct this magnificent mustang and of course Rick's favorite adult novel (I'm serious). Every time old "Two Shades" comes out of hiding, Rick has made another little tweak or improvement. This time it was fly patches.

Check out the Buster Boat in action.

It was the Saturday before Father's Day and for the second straight year, we headed to one of Rick's favorite "Two Shades" spots. A lake with big, dumb-ish carp who tend to be a little more forgiving than those Denver South Platte fish. It had been a year since we'd been out on "Two Shades" and this year's trip had a lot to live up to. Conditions seemed like they were coming together in our favor and spirits were high. Check out Pole v 3.0. Rick's gone through his fair share of poles for "Two Shades." It's long. It's sturdy...and I used the wrong end for my first 30 minutes on the platform. "FOOT DOWN, IVAN!" Cam straps and rod racks, Rick readies the resplendent stallion that is "Two Shades" for a day on the carp flats. If Rick doesn't frame this photo and put it on his bed stand...I'll be offended.

The quiver of Winstons and Abel Reels was ready to go. Retrofitted YETI Tundra poling platform and casting platform for the win. Ole "Two Shades" is surprisingly steady even with two large dudes one large and one larger man aboard.

If you're having trouble imagining what "Two Shades" looks like in action, here's a shot I took a couple of years ago. Rick is on the front and my predecessor Kyle is poling with Pole Version 1.0 - which, if I remember correctly, left in the parking lot when we couldn't break it down and thunder and lightning reigned down from the eastern Colorado heavens. I was on the bow first. Water clarity was good, but the early morning light was a little harsh. We ran "Two Shades" right over a couple of tailers. We slowed down, squinted a little hard and after a couple of blown shots, I pulled it together and we were on the board. The first fish of the day and it wasn't even 9 AM yet. We played "Two Fish." Once I caught my second fish, it was time to switch positions and I took to the poling platform. It wasn't long before Rick found his first fish of the morning. The nice thing about poling Rick around is you don't have to be that good at poling. An average carp for the day. It was still left of noon and we were into our sixth fish of the day. Things were looking up. Water clarity wasn't the best, but we were seeing tails and happy fish in the shallows. Rick letting the Abel SDF purr in the morning. Rick showing off a Golden Bone. Lips only a mother would love. Rick was in the zone. In his happy place. Petting cats, drinking wine, and enjoying a Virginia Slim. I took to the casting platform and after more blown shots than I would like to admit to, I composed myself and channeled my inner Opposite George and waited an extra second before I set.

Opposite George quickly put two on the board.

What followed after this fish was released, was nothing short of a shitshow. I poled Rick towards a set of feeding fish close into the bank. But, Father's Day weekend brought out the gong show. Boats and jetskis everywhere. My unstable, inexperienced (READ: I'm bad at poling "Two Shades" in the waves) struggled to keep us out of the woods, willows, and log jams. Rick took the poling platform over and we started to make another pass. But, the flat was a ghost town. The wave action from the jetskis and party boats mucked the water clarity up. Usually, the wave action encourages the carp to get a little bit braver and spend a little more time with their backs out of the water, but the flats were empty the second time around. Completely empty. We found a couple of fish in some thick grass, but presentations were damn near impossible. So, we poled back to the "boat" ramp and decided to do a little exploring.

A couple casts and Rick found what he was looking for.