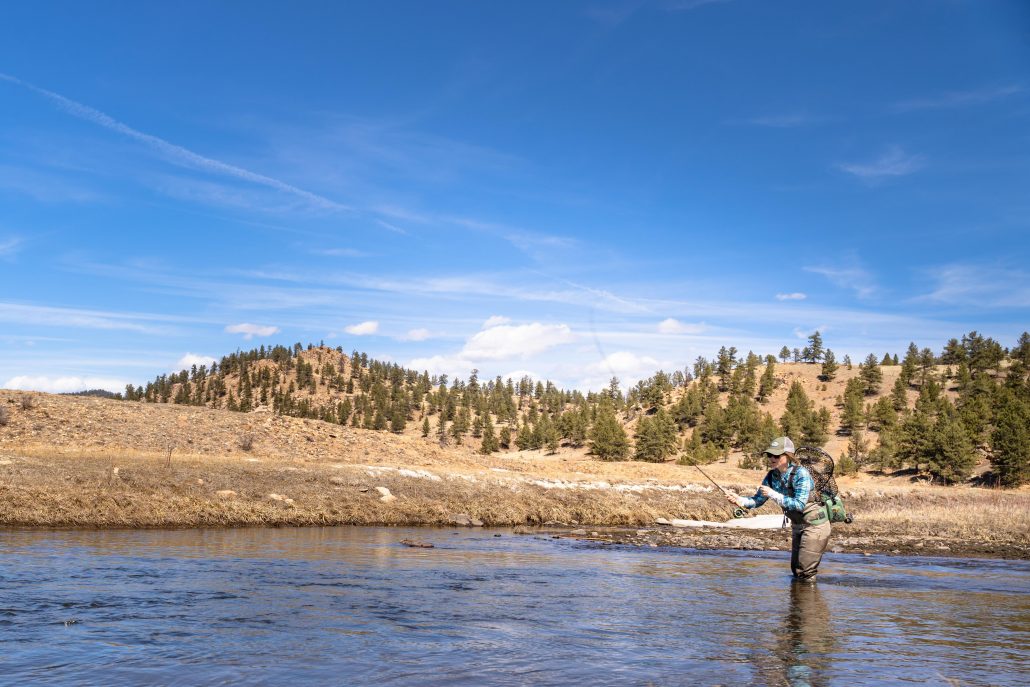 If you've ever driven US 24 from Colorado Spring to South Park, I'd lay good money that you've rubbernecked HARD when you drove over the South Platte just past Lake George. Like any true fly angler, you've probably hit the rumble strips on the side of the road as you eyed the meadow stretch of the South Platte and dreamed about what was swimming underneath those beautiful cutbanks. Earlier this week, Tucker, Courtney and I had a chance to visit the most recent addition to our selection of Private Waters here in Colorado, the Abell River Ranch.

We're excited to offer guided fly fishing trips on this three-mile stretch of private water on the South Platte River near Lake George. With wild rainbow, brown, brook, and cutthroat trout, the Abell River Ranch is the idyllic meadow trout stream and is packed with beautiful wild trout who love eating dries, nymphs, and streamers.

Sure, we fished this water in March and it fished well. But, looking at the inviting flats, the undercut banks, the winding bends, and classic riffle run sequences, this section of the South Platte is tailor-made for Dry-Dropper fishing. We can't wait.

If you are interested in fishing this impressive property, give us a shout at 303.733.1434 or email us at shop(at)troutsflyfishing.com.

A quick look at Abell River Ranch. Does it get more South Platte than this?

By the time I arrived, Tucker and Courtney were already chomping at the bit to get on the water. I don't blame them. Neither does shop dog, Barrett. We all saw the same water.

Tucker rigged up his Scott G-Series for nymphs. But, I like to think he was secretly hoping for dry flies. Why else would you bring the G-Series?

Courtney debated the merits of bringing two rods. One for nymphing and one for streamers.

The allure of streamer fishing won out...and two Sage X's it was.

Courtney picking out a couple of winners.

Rigged up and ready to go, Tucker and Courtney walked downstream to the lowest of the properties four beats. It wasn't long before Tucker hooked up with a wild brown. The cameraman was nowhere to found.

Water temperatures were super cold to start the day and fish were sluggish. Their drifts had to be perfect to get a look from the wild trout that inhabit this stretch. Even perfect drifts were getting refusals. You have to appreciate that about a wild trout fishery like this.

Courtney switched up her rig.

As the sun moved higher in the sky and temps started to rise, Tucker drifts a likely run with his "Made in Montrose" combo.

...and BINGO, another wild brown on a small Copper John.

Courtney takes a turn with her streamer rod.

Another good looking wild brown to the net.

Every turn looks fishier than the next.

Tucker found another one...this fish took a couple of his flies though. It went right under a submerged boulder.

The two of them hopscotched up the river. It was Courtney's turn. She saw a solid brown feeding off a shelf and put herself into position to make the presentation.

The sky is bluer the closer you get to South Park. It's pretty damn blue.

Once the clock struck 12 PM, the day started to look an awful lot like this.