Photo Essay: A Guided Day on the South Platte 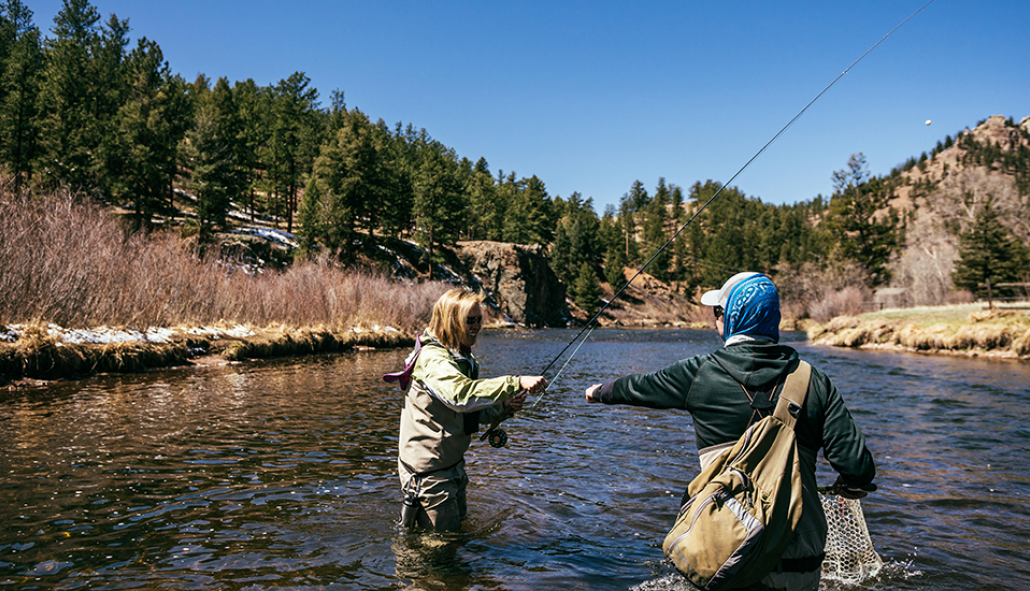 Last week, I joined Trouts Denver Head Guide Scott Dickson and his clients Lynn and Fran on the water for a Guided Trip and some good times on the South Platte. As we've detailed on the blog and in our fishing reports, the South Platte has been fishing really well this spring and it was fun to tag along with Scott (who has been guiding on the South Platte for over 20 years). It snowed the night before, but the sun was making quick work of the couple inches that were on the ground. Scott, like all of our guides, loves spending time on the water with clients of all skill levels. Lynn and Fran, who hail from back east, are avid anglers, but they had never fly fished before. By the time I met up with Scott, Lynn, and Fran, they had already put their SIMMS waders and boots on, received a quick casting tutorial, and they were settled in on one of Scott's favorite runs on the South Platte. I'll let the pictures do the talking from here... Scott Dickson breaks the run into sections and describes how and where he wants Fran to present his nymph rig. Scott and Fran make a little time to change up the fly selection. In an effort to reduce plastic waste and use, all of our clients and guides drink out of a Yeti Rambler for the day. #kickplastic Another hookup for Lynn. Scott's fly box is full and ready for anything that the South Platte could throw at him. Lynn hooked into another fish right after Scott re-rigged.

Lynn shows off a beaut of a South Platte brown trout. Lynn finds the right seam, as Scott re-rigs for Fran. Scott found a fish eating emergers for Fran. Fran made a great presentation and... BOOM, Fran was hooked up! Fran showing him off. Meanwhile, Lynn hooked into another fish...almost a double.

Scott gets ready to pounce... Fist bumps all around. While it was sunny, quite a few Blue-Winged Olives (a type of mayfly) were hatching and the fish were responding. Scott ties on a dry fly for Fran. And Scott found his target. Fran presented the dry and Scott scooped him up.

After a morning filled with good fishing, Lynn, Fran, and Scott head back to the truck for lunch.