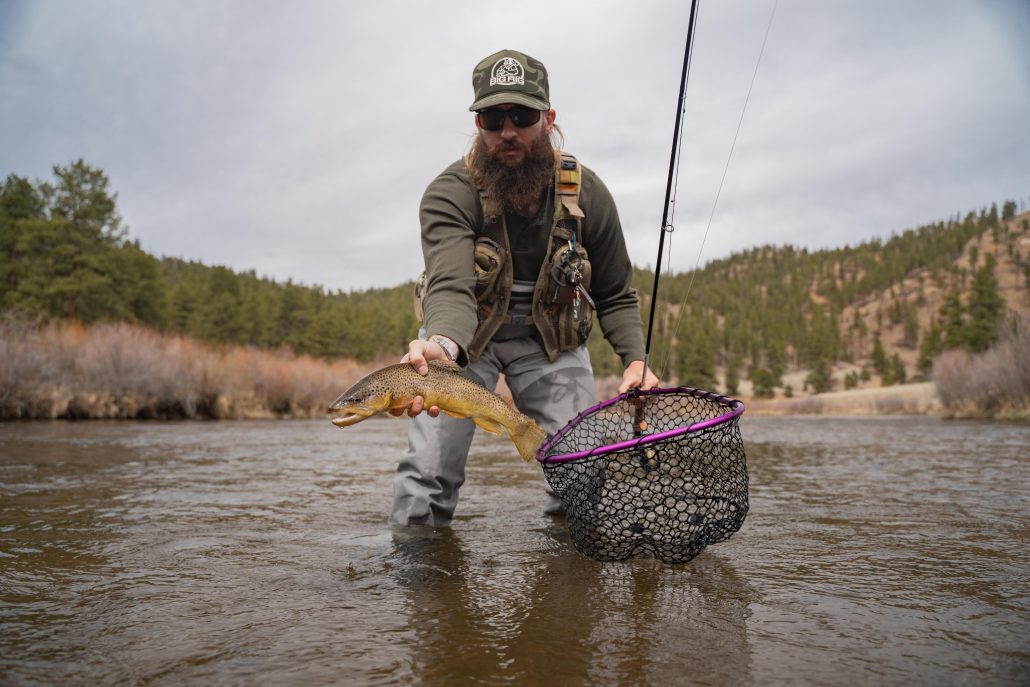 Hey look, it's April and that means ole Big Rig is back. Friend of the shop, Charlie Blackmon - the Rockies "New" Right Fielder, found himself in a familiar position...trying to find trout rising to Blue-Winged Olives. It's been a couple of months since Chuck Nazty graced the South Platte with his presence and some people might say he's changed a bit since his last visit.

That's because he's ditched his old Grand Cherokee for big white Toyota TUNDRAAAAAA. Kicking his old Jeep to curb (don't worry - he still has it) in favor of 4WD, fresh upholstery, and a backup camera, Chuck was playing with fire...potentially ruining all of his good fishing vibes. While his new truck might be comfortable and safe, there are still quite a few things to learn about big truck life...like, is there a Toyota Truck equivalent to the Jeep wave? My vote is for the "Thumbs Up." All the cool kids use the "Thumbs Up".

Anyways, I digress, enjoy some pictures from Blackmon's inaugural trip for 2019 to Deckers.

The Orvis H3 and Ross Evolution R pair up nicely.

When I walked into the Kum N Go on 285 and saw the Coors Light twist offs, I thought, "Huh, why haven't I bought these for fishing, before?"

They make too much sense. They keep the beer in the can.

I was on the board early with this chunky little brown. He ate Dorsey's Top Secret Midge trailed behind an RS-2. Blackmon did the honors of holding it good.

Ole Chuck stepped in for a crack at his first trout of the season.

It wasn't long before the Foamback Emerger claimed it's first victim of the day.

Blackmon starting the day off with a dandy of a wild brown.

As the day progressed, clouds started to roll in...and we saw more and more BWO duns on the water. They were big too...size 16-18. Things were looking up. Not the trout yet, but things.

...and hooked up with a frisky rainbow.

We kept working up through the canyon...and I found a feeding fish right off a drop off. I'm pointing at it. It's hard to see.

I hooked that fish...and he ran into that log jam. I repeated that three times...and lost nine flies. Good job me.

More and more blue-wings were floating down this flat and we thought that good dry fly fishing was imminent. Clouds were staying put and it felt like it was only a matter of time. Blackmon made good use of the wait and hooked up with another bow.

The clouds went away and so did the blue-wings. With no risers in sight, we headed back to the car for lunch.

Neither Chuck or myself are lunch on the river guys, usually, we fish until we stop fishing and then get angry until we eat on the way home. But, Blackmon's wife had prepared us a river side feast for the ages. There were three kinds of sandwiches, a variety of chips, peeled oranges, a vegetable plate, brownies, nuts, and a couple of Gatorades stuffed in Blackmon's YETI. We took a quick 15 to reup.

Feeling refreshed we tried to find risers in the shade. Fish were holding in protypical dry fly water, but they weren't eating off the surface.

But, they were still eating.

We kept on working water and catching fish until it was time to call it a day. But, not without trying a couple of prospecting casts of a double BWO dry fly rig.

Ain't no fish rising, but at least Chuck gets to show off his new truck and super sweet tight loops. It ain't no 2002 Jeep, but the Tundra has some good juju.