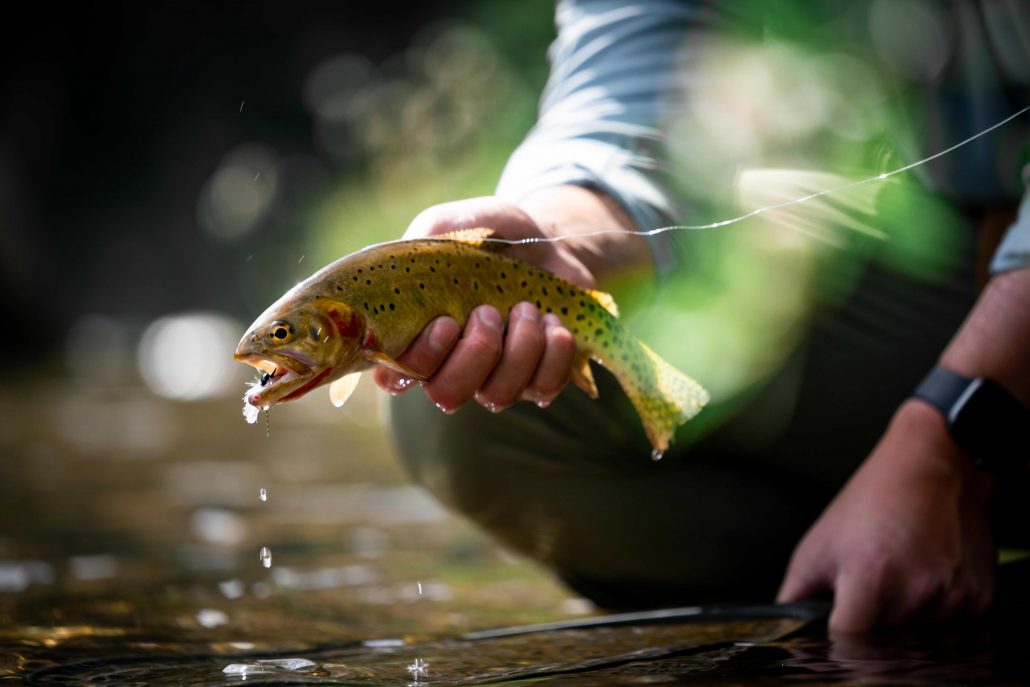 "How are your tires?" I asked Jon, Trouts Denver Assistant Store Manager, about his new truck last Friday. I might be a bit of tire snob (admittedly for no real good reason), but I knew we'd be driving over some rougher roads on our way to this small Front Range lake filled with cutthroat trout. "They're good A/T tires, Ivan. We're fine." By the time Monday rolled around, we were headed to the lake, good tires or not. George, a new shop kid, joined us as we headed up I-70. There were no expectations of big fish, but damn it if we didn't want to see some natives rise to big bushy dry flies.

With a late start out of Denver, we were hoping to find a couple of cruisers looking for some big, bushy dries. Jon looks to pick out a couple of winners.

After a quick walk up to the lake...

We were catching them within minutes. That's always a good sign. This little feller smoked a Royal Trude.

Jon joined in on the fun.

With a low-riding Fat Albert.

Wildflowers were in their prime.

George roll casts his hopper-dropper rig. Beign mindful of staying out of all the ruffage behind him.

and was rewarded with this Amy's Ant eater. That's three bushy dry flies that caught fish.

Jon was sorting through his fly box looking for another bushy dry that might catch a couple.

A quick look before being sent back.

George overachieved and brought a 30 rack of Hamm's. That was a few too many beers for the three of us to handle on a casual Monday. But, we kept them at the ready in the new Umpqua Ledges 650.

We kept working our way around the lake. Finding nooks and crannies where fish were gorging on small naturals.

It was cool to watch the packs move through a shallow flat and pick off everything that sort of looked like food.

How about a Hippie Stomper? Surely that will catch fish.

We kept on working water and kept finding willing fish.

The good light even showed up a time or two.

George went back to the Amy's Ant...

His Amy's Ant needed some tender loving care after it's share of eats.

As the sun dropped behind the peak, we figured it was our time to go. The road back was bumpy and...

Jon had some pork rinds to eat.