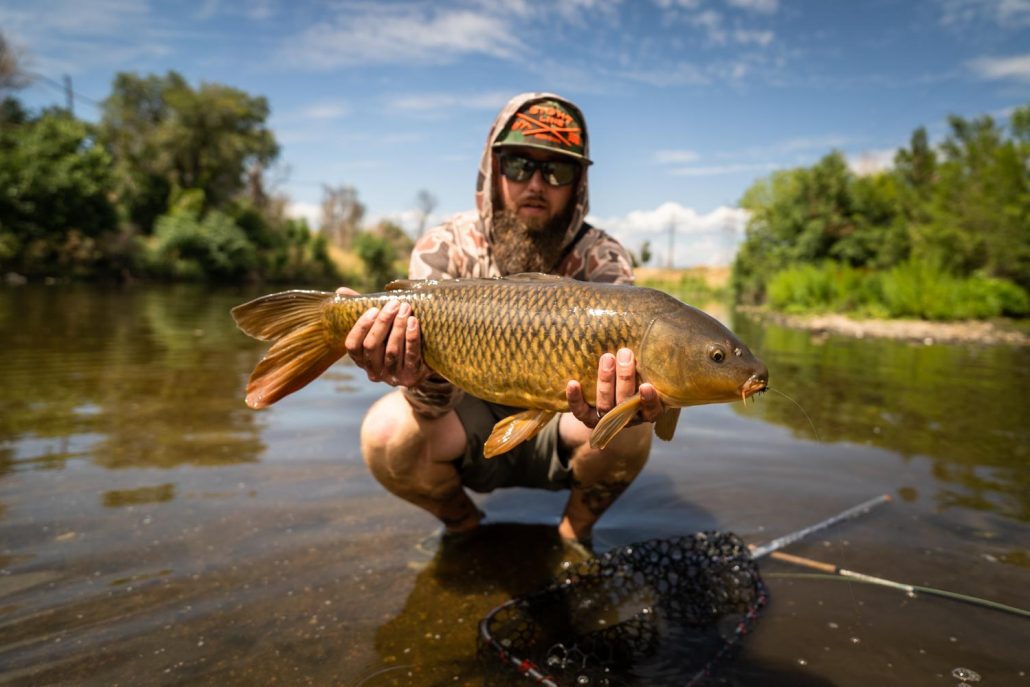 Things have been pretty hectic around here with the new shop on the Denver South Platte opening up two weeks ago. So, when I asked Rick if he wanted to get out for a little pre-work morning carp fishing, the answer was a resounding yes. Rick and I have had a bit of a cold streak. If it hasn't been one thing, it's been another and when some much-needed thunderstorms rolled through on Wednesday night, the state of the river was in question for our Thursday morning carping session. Rick shot an early morning text that we were going to give some spots north of town a shot and we agreed on a time.

Now, I'd like to say that I'm a punctual person, but I have a bad habit of showing up a couple of minutes late. That's a bit of an angling faux pas, but luckily for my guilt level, Rick and carp wait for no man...

If I'm late for fishing, this is how I typically find Rick. Rigged up and scouting fish from the bridge.

Rick had his 7-weight Orvis Helios 3D and a handsome gray Abel SDF 6/7 rigged up for DSP's finest.

Rick Mikesell, the one-shot wonder, quickly hooked up after I arrived fashionably late.

Rick shows him off before a hearty...

Back in business, our string of bad luck with fishing trips appeared to be in danger.

Rick popped back up on the bridge to verify there were no more fish to be had and we walked downstream to the next flat.

We worked our way across some rip-rap.

Through some of that soft DSP river bottom.

And then reappeared 10 feet from me.

A couple of casts later...

The agony of defeat.

On to the next one.

Oh heck yes. There was DANGER ahead.

We worked our way downstream and found a couple more active feeders.

Shortly after, Rick was tight after a refreshing mid-column eat.

Not the biggest, but this DSP carp certainly looked good.

Shortly thereafter, we ran into some picky fish. A reluctant fly change after a couple of refusals and...

We called it a morning. Work after all was calling. But, Rick couldn't resist throwing a couple of casts at a pod of cruisers.

Those casts paid off.

and Rick wrangled another one.

A nice way to end a productive morning on the water.