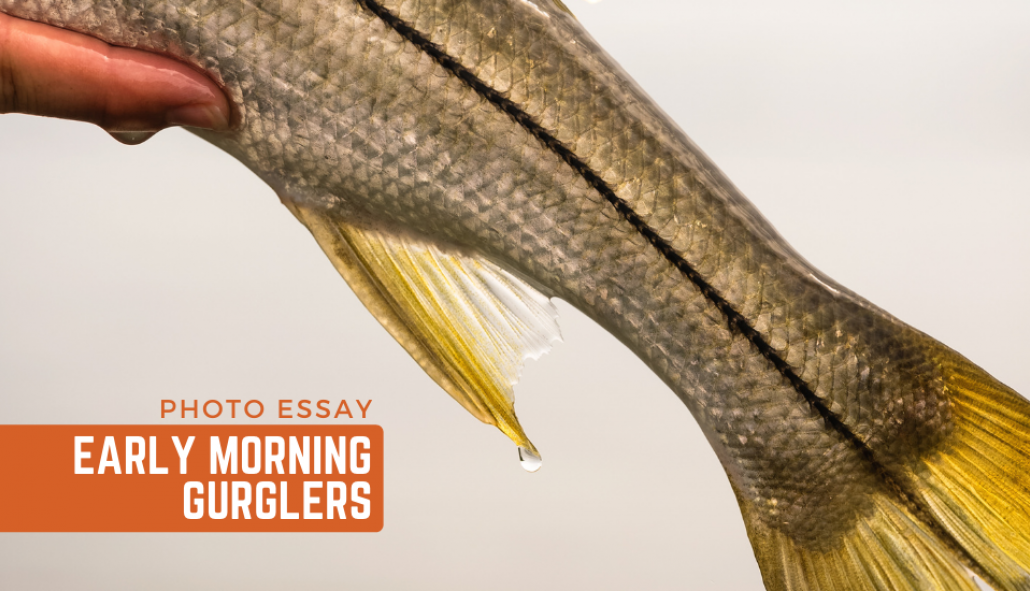 Fishing is literally the only thing that has me up at 5 AM...voluntarily. If I'm facing the prospect of fishing the saltwater, there's a fair chance the phone alarm isn't making it through the first "BEEEEEEEEP." I'll always be a trout man through and through, but different is good and I like chasing fish that eat other fish.

It's 5 AM on a Monday in Florida. I'm wide awake...sneaking around the vacation rental, collecting my gear, trying not to wake slumbering youths (ages 1 and 4). My family and I have a whole entire week of lounging on the beach in front of us, but I've managed to secure some on-the-water time to chase some fish with the big sticks. There was a time, a handful of years ago, when our very own Zeke Hersh spent his winters down in and around the waters of Sarasota, Florida, cruising the flats in his drift boat. I'm sure it was a sight to see, but, it shouldn't be a surprise that Zeke both caught fish and made good friends.

Luckily for me, Zeke has plenty of good friends down at Compound Board Shop and it just so happened their own Mel Gannon had a couple of free hours to spend pushing my trout fly poling self around. Mel pulled up with her Mitzi skiff in tow and I laid out some pretty low expectations...both for my casting (I am a trout guy after all) and for fishing. It's the most stereotypical saying in fishing, but it still plays: "A bad day of fishing is better than a good day at work." We loaded up into her skiff and we were off. The Tampa Bay area has had it's recent struggles with red tide, but Mel had a spot in mind that had some clean, fresh water and presumably some fish.

We cruised through the humid Florida morning air and put some distance between ourselves and the boat ramp. Soon enough, we were idling towards a flat. Mel killed the motor, handed me the G Loomis NRX+ 8 weight, and hopped up on the platform. Undeterred by the overcast conditions (which certainly makes the sight fishing game a bit tougher), we started scanning the horizon for signs of life.

Mel was hoping there would be a school or two of redfish hanging around these flats, but with low light - finding those reds looked to be a tough proposition. With plenty of cormorants tagging along, it was time to throw the gurgler. Mel passed on some of the finer points to retrieving the gurgler and I started throwing some line. From pops to twitches to ticks and strips, it's all about presentation.

I gurgled the gurgler and we ran into piles of sea trout. "Came all this way just to catch trout, huh?" yelled Mel. I guess so. I haven't caught many sea trout in my life, so I was happy enough to watch them make the gurgler disappear as I twitched, paused, stripped my way over patches of sand and grass. As the sun started to peek through the clouds, we headed towards a mangrove-lined bank to look for some snook and maybe a wayward redfish cruising the shoreline. The gurgler stayed on and we were hearing the signature loud pops of snook-busting bait on the surface. A couple fish fell for the gurgler, but the fishing slowed noticeably and we were the unfortunate recipients of a hard refusal or two.

The gurgler came off and was replaced by a baitfish as we banged the banks and tried tucking the fly into tight mangrovey windows. Much to my surprise, this tiny barracuda made an appearance. An aggressive eat is an aggressive eat and I wasn't complaining.

The cloud cover was consistent and we'd only see the bigger snook and redfish cruising the banks when it was too late as they'd swim into our window of vision awful close to the boat. So it remained a blind casting game on a humid Florida morning. I spent plenty of time catching mangroves trying to fit my fly in those tight corners with the hopes of a decent snook charging out from his ambush position and that willingness to lose Mel's flies paid off plenty of times with this decent little snook. We called it a day around noon and headed back to the boat ramp.