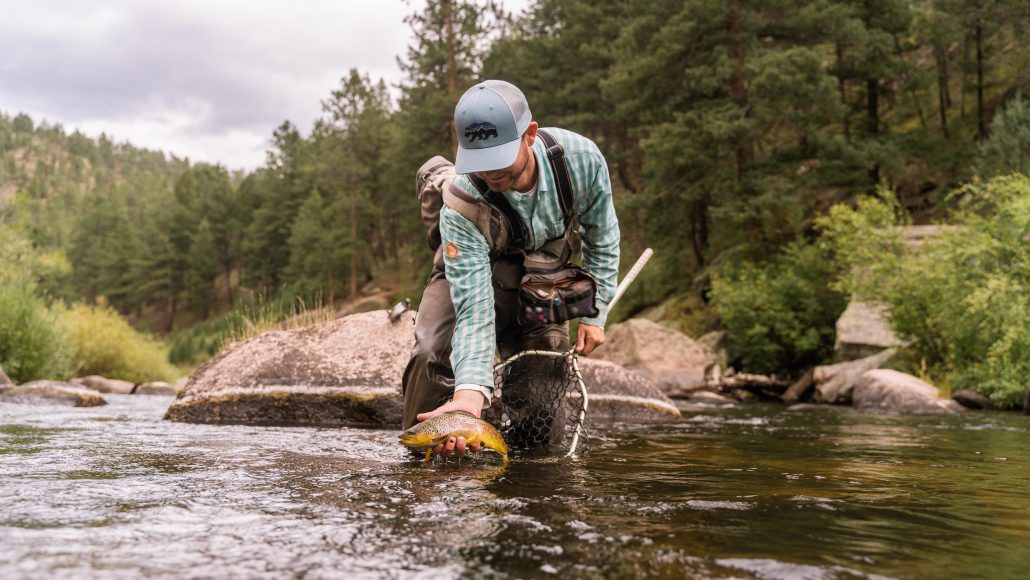 Anyone who has fished Cheesman Canyon knows...there are unexplainable forces at work when you make that hike into the canyon. Things just happen. Weird things. Good things. Not so good things....and sometimes great things. I've broken rods, lost fly boxes, lost nets, and caught some of the most memorable fish of my life within those canyon walls. As the old saying goes, if these walls could talk.

I've never had a really average day in Cheesman, it's one extreme or the other. From the best day ever to a day-long grind filled with countless reasons for frustration, Cheesman always keeps you guessing.

Yesterday, I met up with Trouts Guide Dan Thistle and photographer Max Kilibarda of Waypost Creative and we made our way into the Cheese. Spirits were high and we tried to keep our expectations low.

Dan and Max making their way to the good water.

To our surprise, a Golden Stone crawled right on out. Things were looking up.

Blue Wings were on the water and there were even some PMDs hanging around. Fish were rising.

And Dan took first crack at a set of risers.

Dan with the Rising Net SCOOOOOOP!

A solid brown to start off the day.

Max was capturing the action. Stay tuned for his photos from our trip!

A #22 Olive Parachute Adams was doing the trick.

Dan crosses back over in search of a quick hat trick to start off the day.

A feisty Cheesman Rainbow fell victim to Dan's well placed dry. I'd seen enough, I tapped in and wanted a shot at the last riser. I got in position. The fish rose. I waited for him to rise again. It started drizzling. The bugs started to disappear. He didn't rise again. Cheesman'd.

Dan casts in the rain...trying to find another riser or three. Nothing. The rain cut off the dry fly action. I switched to a nymph rig...and hooked one that shook off rather quickly. Fish continued to feed and I found the right depth. Fish on. I played him from some high boulders and finally into some soft water to scoop with my net. But, my net got caught in my gravel guard hook and I was handcuffed. I panicked and pinged the 5x tippet and my WD-40 right out of that rainbows mouth. Cheesman'd.

Dan works a pod of feeding fish from a good vantage point.

And Bingo. Bango. Bongo. Fish on.

Dan shows off another bow for the wide-angle lens.

After a couple breakoffs on hooksets and inexplicable losses, we found a run for Max to slide in. Max hadn't fly fished before, but he was a natural.

He stepped right in and was roll casting into the prime portion of the run in no time.

Fish on for Max. But, the bow got downstream of him pretty quickly and the hook popped.

Max tossed my rig back in the mix.

A couple of drifts later, Max was hooked up.

Dan anticipated the downstream run and...

First trout on the fly for Max. A Cheesman bow, no less.

Dan jumped back in.

And viola. There's another trout.

But, this rainbow quickly corralled.

All said and done, I caught two fish. I hooked double digits and landed two. I lost more flies than I'd like to admit. Broke off 4x, 5x, and 6x. Broke off Double Surgeons, Triple Surgeons, Blood Knots, Clinch Knots, Davy Knots. I lost fish in every way imaginable. I got Cheesman'd pretty hard. After nearly breaking my rod while roll-casting...it was time to call it a day.

We had some pretty reasonable views on the way out.

And some cold CL Smooth's waiting for us back at the Trailhead.