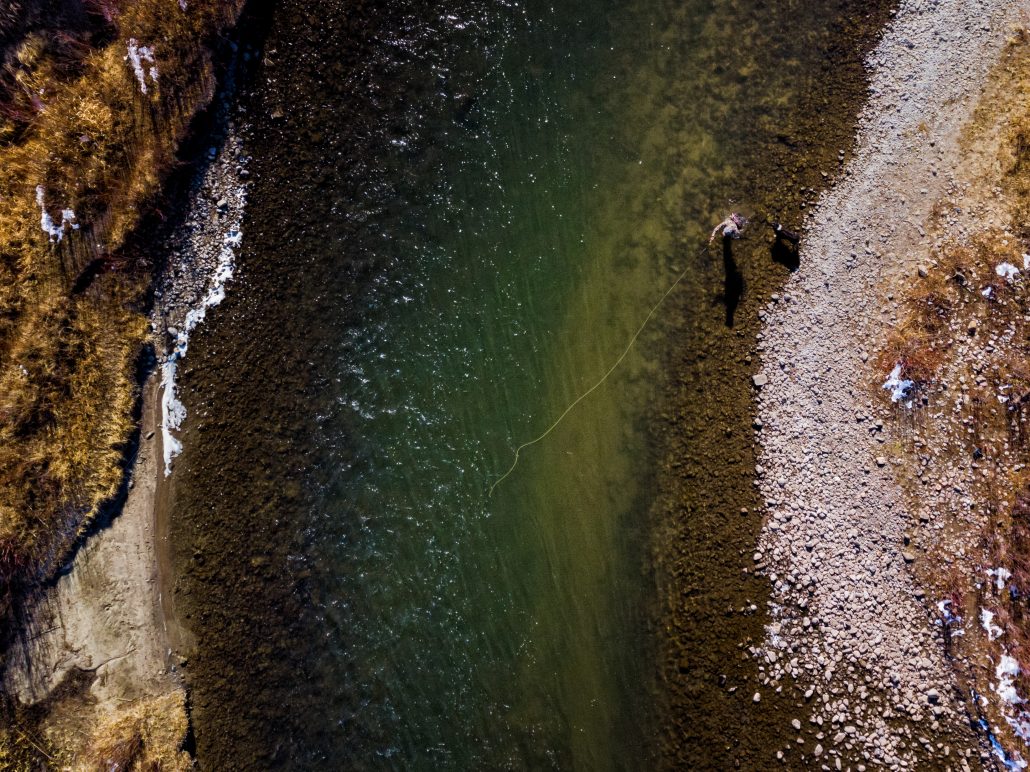 If you've swung by the shop over the last couple of months you might have seen a couple of new faces. One of those new faces is ole Conrad. Conrad, a Minnesota native, has lived on and off in Colorado for over 11 years. There isn't much water, especially around Summit County, that ole Conrad hasn't fished. After a stint in Utah, Conrad has recently returned to the Front Range and has been fishing all his old haunts.

With some downright mild fall weather in the forecast late last week, we decided to make the trip up to the Colorado River to try and sling some streamers, find some dry fly action, and nymph...if we had to. There's something relaxing about those late fall days on the water. You're not hanging on to the last days of summer. The slower, more methodical pace of winter fishing is inevitable at this point. Somehow that's a relief. This is the time of the year when you can make things pretty simple on the water. It's about finding fish and finding the right depth because we all know there are only a couple things they'll be eating this time of year.

With sun in the forecast, Conrad chose white...and big. The White Circus Peanut.

A little hopeful, we strung up three rods between the two of us. One with a streamer. One with small dries. One one with nymphs. Conrad combs through his option to toss on the Winston Pure.

Finally, it was time for those small nymphs. Snipping off some of that new SA Absolute fluorocarbon, Conrad picked McCannel's Neon Nightmare and Dorsey's Top Secret. These tailwater legends still catch fish on the freestones.

Easy does it, Conrad.

Conrad's trusty steed, Millie, made the trip. She was excited and waiting for Conrad and myself to get our poop in a group.

We headed downstream from the parking lot. Millie wanted to make sure I was coming along.

Conrad dipped his toe in the ole Colorado...

and hooked up with a Whitefish. Not the start we were looking for, but...a bent rod is a bent rod. This one goes out to Matt McCannel. His flies always catch the trophies.

Conrad worked that color change and looked to find a player or two, but it was still a little slow in the morning.

Ain't nothing like a little Colorado love on the Colorado. The Abel Vaya paired well with the Sage X.

We cut across and fished a couple of side channels. Action was slow until around noon. I was dredging a full sink line through a slow pool and pulled out a couple of feisty browns, but not with any consistency.

As we worked our way back upstream, we found ourselves at the bottom end of a long run below an island. Who knows how many fish stack up in there, but that run is always good for a couple of fish.

Our confidence was restored as the water temperatures started to warm up and Conrad locked in.

Beer me that net, Ivan.

Another one for the Rising Lunker net.

But, we were having a time.

What these Middle Colorado browns might lack in overall size, they make up for in different ways.

The sun started to creep behind the hills and we knew we only had so much more good fishing to squeek out.

Conrad made the best of it.

Put another one on the scoreboard, ole chap.

Let's go check that one run...and then we'll head back to the truck.

It was only 4:45...and there were midges everywhere.

Conrad slips the last one of the day into his Rising net...

And it had to be the best-looking fish of the day. As the old saying goes, BYE NOW!