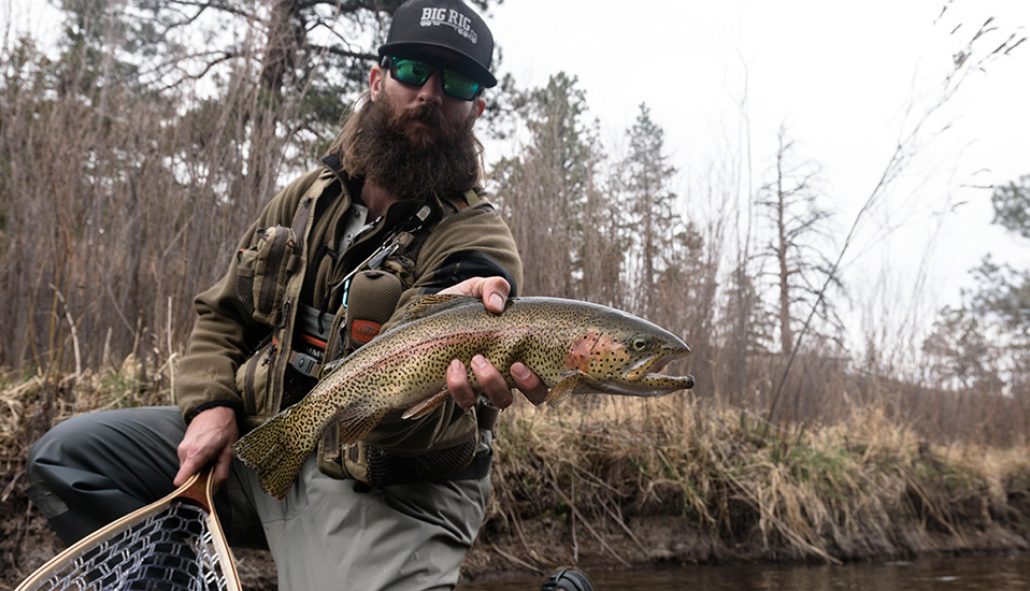 Baseball season is here and that means friend of the shop, Charlie Blackmon, is back in town. It had been 3 months since ole Chuck Nazty caught a trout and like any self-respecting fly fisherman, he was chomping at the bit to get out on the water. With winds forecasted throughout our great state, we decided to stick close to town and try and avoid some of those damn winds and fish Deckers. Enjoy some pictures from Blackmon's Opening Day on Deckers.

A couple drifts in and Chuck was off the schneid. The three month slump broken. South Platte providing a stunner of a brown. It wasn't long before the RS-2 produced another one. Blackmon with the scoop. Plenty of fight left in this South Platte brown. Another South Platte brown showing off his spring colors. Cream Midge did the trick for another South Platte resident. Chuck putting his new gear to the test. A bit of an upgrade from his two-year-old intro setup. I think very highly of my ability to get snacks on a fishing trip...my physique reflects that. But, I was out-snacked by Blackmon...he showed up with two grocery bags worth of snacks and he didn't step foot in a grocery store. Charlie Blackmon, professional snack guy. Those dry flies wanted to get used, so we headed back to the truck to switch spots. We arrived to a handful of rising fish. We took a seat on the bank and started to change our rigs over to dry flies. This baby muley decided it would join. Then, Momma Deer joined the party and wanted to check the flows.

And the whole damn Rock Pile showed up. Can deer raise hackles? Who out there is a deer scientist? Is this deer angry? There's no way THE GREAT BAMBI is angry. Unfortunately for us, there weren't a ton of rising fish to be found that afternoon. There were a couple and they were picky. As the sun continued to fade, so did our dry fly opportunities. (Sad face emoticon)

Earlier, when we switched from nymphs to dry flies, Chuck wasn't looking forward to re-rigging his nymphing set-up. So, he hung his intact three nymph rig on what he called Chuck's Pine Tree. One blood knot and he was fishing again. Damn you Chuck's Pine Tree... time-saving tricks like that meant Chuck spent more time with his line in the water....which meant more fish like this.